A couple times a year, our friend Sam Fuson holds a gaming day at his farm outside Gettysburg.  He invites friends and family, and always tries to get some folks new to the hobby; and a bunch of us from the HAWKs always go to host games, and just have fun playing.  This past Saturday was the latest event and a good time was had by all!
In the morning we had two games;  a Dark Ages battle using "SAGA", and a WWII battle using "Combat Patrol".


I played in the "Combat Patrol" WWII game, which was an early war battle featuring a French counterattack against German defenders.   The French headed up the middle due to terrain constraints, and lucky German marksmanship soon left the table with burning French tanks.
I was the black sheep on the German side, not being able to hit anything with my two PzII's , and having both disabled by French medium machine guns.

The French had the objective of exiting two vehicles off the far table edges, moving lengthwise, which  they were unable to achieve, having all their vehicles destroyed.

In the afternoon, we again had two games; a French and Indian War fight using "Muskets and Tomahawks", and a Napoleonic skirmish battle using modified "Combat Patrol".


I played in the Napoleonic battle using modified "Combat Patrol" on the French side.  The goal of the scenario was for opposing skirmish lines to maneuver to fire on the opposing side's formed battalion behind their skirmishers. So it's a balancing act between firing on the enemy's skirmishers to suppress their fire, and maneuvering to get in range to be able to fire on the enemy's battalion.

Again in this battle I had lousy luck shooting, doing very little damage to the opposing British skirmish line.  Eventually, I closed close enough to do some hits on the formed battalion behind the skirmishers, which helped our side.
My shining moment came quite by accident, when one of my squads failed morale and the result  caused it to charge into the enemy's skirmishers across the way.  They actually got the upper hand, wounding some of the Brits, and pushing others back.  They then on a subsequent turn got the same result, and once again launched into the British skirmishers, the lines now totally intermingled.  This so disorganized the Brits across from me that they were hampered from effectively firing on the French battalion behind our own skirmishers. In the end the French won the game, doing more points of damage to the British battalion then the Brits did in return.
I luckily ended up being on the winning side in both of the battles  that I played in, though my contribution was minimal to both of the battles. It was a great day of gaming, and as always Sam was a great host; and ensured a good time was had by all.

Posted by Chris Palmer at 10:29 AM No comments:

We kicked off our Frostgrave Campaign this past Saturday with our first game.  We had five of our 7 players take part, and a good time was had by all.   I choose an Illusionist as my wizard type.

My illusionist, Kodak, and his apprentice, Cherowyn, entered the city via the harbor with high hopes of the treasure that might be found in the rotting hulks in the harbor.   Unfortunately, the magical duo were operating under a poor alignment of the heavens this expedition, as only one of the almost dozen spells they attempted to cast actually succeeded.  Likewise, many of their brave band fell during the battle, and they were only able to recover two of the treasures.
When they regrouped after the foray, they discovered the thug, “Happy”, was dead, and the templar, Sister Elessa, lay badly wounded from a bone dart, which left a festering wound that will take a long time to heal.   Cherowyn, the apprentice, though presumed dead after being attacked by a prowling pack of wild dogs and a wolf, managed somehow to survive with barely a scratch.  Her powers of illusion must be strong indeed, but she now has an understandable aversion to dogs of all kinds…  Likewise an archer, and two of the thieves were incapacitated during the game, but recovered themselves after the fight.
Our treasure was worth a tidy 280 GC, which Kodak used to hire a new Treasure Hunter, and a replacement for the dead thug. The rest went into the groups treasury.  Also recovered was a fine Staff of Power(2), of which Kodak took possession.
In the meantime the band has found an old inn on the outskirts of town, and has fixed it up to be a new center of operations.
We are now looking forward to our next foray into the frozen city next month. For the report on that following game, see: Game 2

Posted by Chris Palmer at 9:34 AM No comments:

I was in the local A.C. Moore craft store this past weekend, and noticed these bags of "Beach Glass" on a clearance rack for $1.00.  I was immediately taken by how they looked like ice. 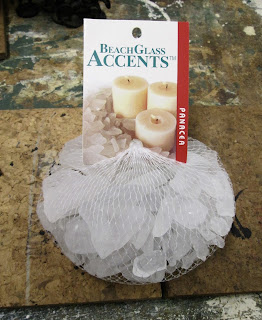 I cut an old CD into an irregular shape, and test fit an assortment of the glass on to it. 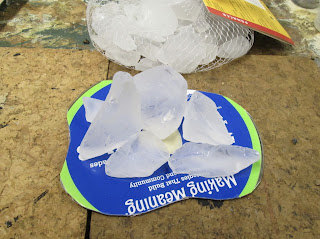 I then sprayed the CD with some flat white spray paint, and when it was dry, I glued an arrangement of the beach glass on to the CD using Tacky glue. 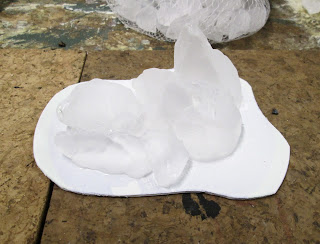 When the glue was dry, I lightly drybrushed the glass with some white paint, then painted the CD with regular white glue and applied Wood land scenics snow flocking. 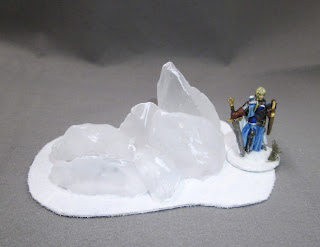 For a dollar investment, and less than an hour's work time, I pretty pleased with how it turned out. I'm thinking this will make a nice addition to my Frostgrave harbor.
Posted by Chris Palmer at 6:49 PM 8 comments:

The Tree of the Wizard, for Frostgrave

I had this old shrubbery root sitting around the workshop for a long time. And while I always knew I wanted to make some sort of tree out of it, I was never sure exactly how I wanted to put it to use.  Then I recently had the idea to use it a a piece of Frostgrave terrain, inspired by the Tree of the King that grew in Minas Tirith from the Lord of the Rings trilogy.
It didn't take long to glue it to a base, build up a little mound around it, and add some gravel, to complete the project.
I can see running a scenario where the tree is the Frostgrave Tree of Magical Wisdom, with a single bloom growing at the very top (sprouted now that the city has started to thaw); and which ever wizard can get the flower gets an extra roll on the treasure tables. 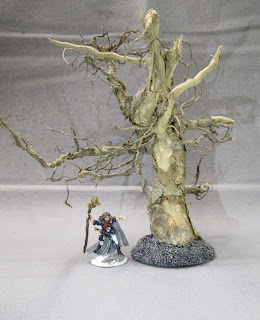 I don't think I will do any winter effects on the tree, so I still have the opportunity to use it in games outside of Frostgrave.
Posted by Chris Palmer at 11:56 AM No comments:

My gaming room saw a lot of activity this weekend, as I hosted both a game of "Bear Yourselves Valiantly" (fantasy mass combat) on Friday night, and a game of Frostgrave (fantasy skirmish) on Saturday afternoon.   Because we were expecting a light turnout for our usual alternate-Friday club meeting, I offered to host the game at my place (especially since an advance scout had reported that the hall where we usually meet had hardly been dug out from the blizzard.)  I had been scheduled to run a playtest of my BYV game for Cold Wars anyway, so having the game at my house made my set up all the more easier.
We ended up with four players for the game, which featured a Elven rearguard trying to keep marauding Lizardmen and their Goblin allies away from a retreating column of refugees and treasure fleeing the nearby Elven capital, which was under attack by the Lizardmen.
The game went down to the wire, with the column of refugees approaching the exit area just as a warband of Wargs cut the road.  We had to end due to the lateness of the hour, but it would have been a close and exciting contest to see how it would have ended.

The next day, Saturday, I was scheduled to help Don Hogge  with a demo of Frostgrave at a local game store.  Then, just as I was getting ready to leave, Don texted me from the store to let me know that due to the blizzard, the store's tournament schedule had been pushed back; and the table we would have used for the demo, was being commandeered for other purposes.   So I suggested that Don, and another friend who was coming to the demo, Jim, just come over to my place for a quick pick-up game of Frostgrave anyway since the store was only about 10 minutes from my house.   It would be a great opportunity to put my new waterfront terrain into action, as well as some of my new Dwarven Forge City Builder terrain.
The highlights for me were my Illusionist wizard and apprentice casting the Glow spell on about 5 enemy figures, allowing my pair of archers to have great success in drilling several of them with arrows. This is a tactic I will have to remember in the future.  I also managed to cast a Mind Control spell on Don's medium construct, and used it to bash on his wizard.
In the end, when the dust (or would that be snow?) settled, Don won with 4 treasures, I got 3, and Jim got 2.  I'm really looking forward to starting the campaign later this month.

Posted by Chris Palmer at 8:34 AM No comments: