While on a trip to the local Dollar Tree a couple weeks  ago, I noticed some Barbie-like Mermaid Dolls in the toy section, and was struck by the intricate molded detail on their tails.  Having had recently read about the upcoming Frostgrave rulebook, Ghost Archipelago , I thought that these tails might make some sort of neat sculpture or totem of an ancient nautical themed civilization for use with the new rules.  And, so I began my first Ghost Archipelago terrain project. 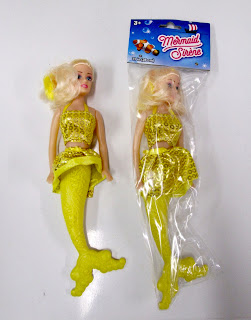 I started by removing the tails from the upper torso.  They are just held in by a plastic button, so easily pull apart.  I then created a base out of an old CD and a couple 1.5 inch washers.  Next, I cut the tails down so they would sit, and cross, at just the right angle.  After that, I cut off part of one fin to help give that ancient crumbling look.  I then glued the tails to the base, and also glued a pattern of plaster hexes into the center to help hide the hole in the CD.  I then filled the broken fin piece and the part of the tail where I cut it from with a bit of cork, and then covered the cork over with hot glue.  Lastly, I glued the broken fin down, and then covered the hot glue on the broken pieces with some white glue, and sprinkled a little fine sand on it to help the broken stone appearance. 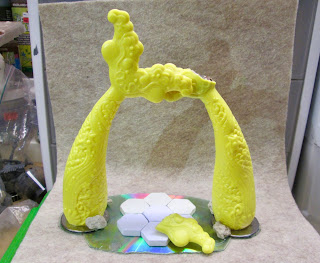 I then coated the base with white glue and then covered it with a coarse sand mix.  When everything was dry, I sprayed a base coat on the piece with some dark brown camo spray paint. 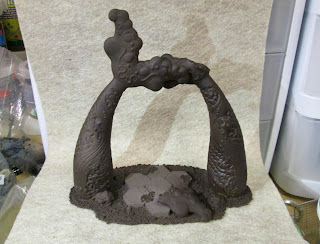 It was then just a matter of giving everything a drybrushing of progressively lighter shades of tan.  Afterwards, I glued some foliage to the base, and bit of vine to the top of the arch.  I then sprayed the piece with some matte varnish. 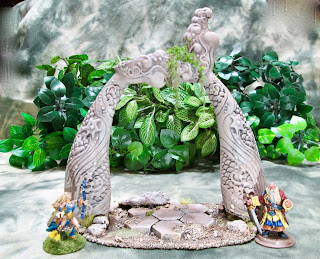 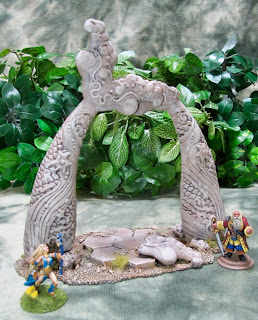 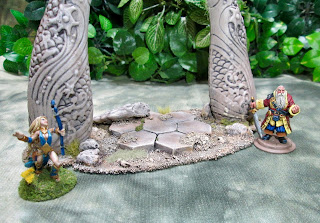 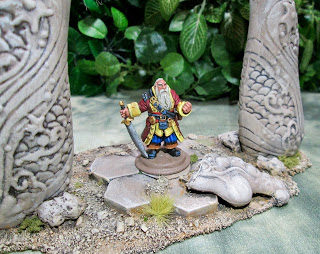 I'm really happy with how this turned out, and look forward to next Fall when the rules are released and I will get a chance to use it in a game!
Posted by Chris Palmer at 12:00 PM