While on a trip to the local Giant supermarket, I (as usual) scoped the seasonal aisle for any useful Halloween decorations I could convert to wargaming purposes.  I spotted these plastic goblets being held by skeletal hands, and my imagination was immediately struck by the idea of this giant skeletal hand emerging from the ground... but what could it be holding? 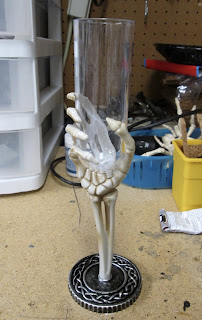 I posed the question on the Reaper Forum, where I have a thread of all my Frostgrave constructions,  and the idea soon emerged of some sort of tower.  This developed then into the visual pun of a "Watch"-tower that would actually have magical eyes all over it, "keeping watch".
I found a suitable cardboard tube to use as the ruined tower, and some beads that would do for the eyes.   I glued the beads on, then used some Milliput to make the eyelids.  I also cut two windows in the tower, and made windows from a pair of Dollar Tree "Spirogragh"-like drawing wheels. 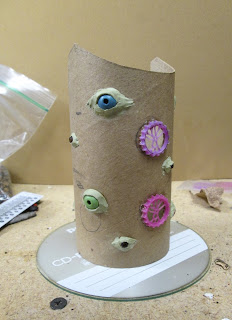 I cut the plastic goblet down to a couple milimeters above the skeletal fingers, and I cut the base off as well.  I then sanded the goblet to rough up the surface, and then cut stonework and a door from thin cardboard and started gluing it to the goblet with Tacky glue. 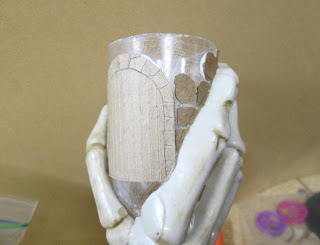 For the stonework on the tower, I tried a new method that one of the helpful folks on the Reaper Forum pointed me towards.  I covered sections of the tower with spackle, and then rolled those sections in a box of aqaurium gravel. 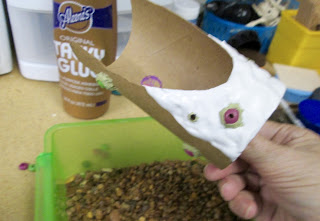 After I pressed it into the gravel, I used a toothpick to move some of the gravel around into more pleasing arrangements where it had clumped up; and added bits where it was thin.   Then after, each section dried, I would move on to the next until the whole tower was covered. 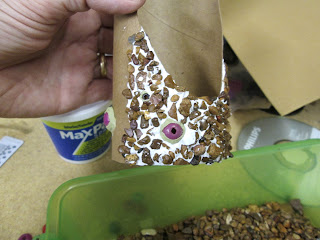 After that, I glued on the old frame of a roof that I made from bits of mulch, and also added a ruined toothpick floor 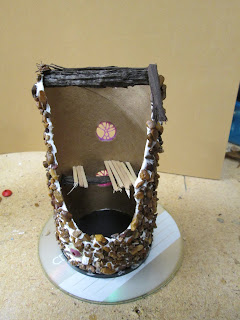 Next, I glued some round plastic bases, and juice lids together to make transition levels from the goblet's diameter to the tower's. 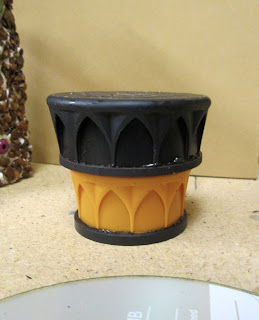 I detailed the 3" plastic base the tower would sit on with some stonework and a trap door, and added little wire-ring doorpulls to the main door and the trapdoor. 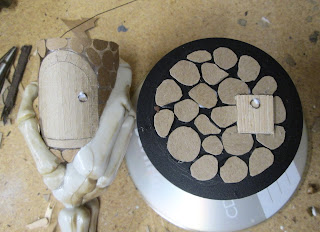 My next step was to hot-glue the skeletal arm to a CD. 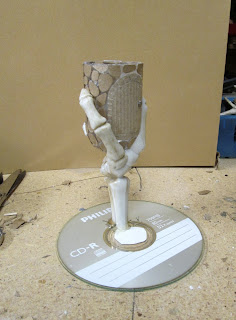 I also glued the tower to the transition levels, but decided to leave the lower hand portion and the upper level separate for easier storage.  Also, after this photo was taken, I added a bit of foamcore to the CD to break up how flat it looked, then I glued a large washer to it, to help with the top-heaviness of the construction.  I the added rubble to the base including a bit of wall with another eye on it. 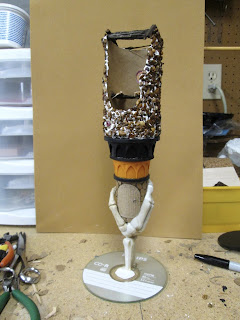 Next, I sprayed it all with flat-black. 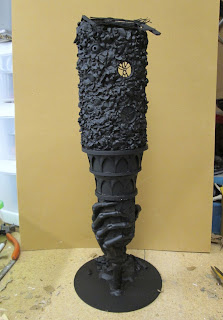 When the spray coat was dry, I painted it using simple drybrush methods.  Below is the finished tower shown with two Reaper figures for scale. 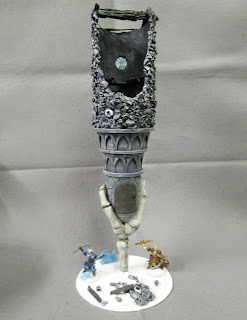 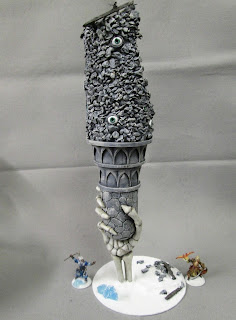 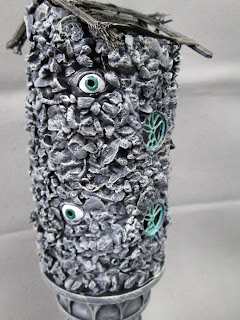 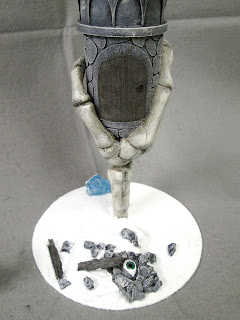 I'm happy with how this build turned out, though I have to say it is certainly one of the most wacky things I have made! :)