This past Saturday the HAWKs got together to begin work of painting this year's Armies for Kids project.  For the past several years, the HAWKs have undertaken a project of creating a dozen or so armies with the goal of giving them away during a special kids game at Historicon.  We also usually present the kids with a bag or box full of terrain and gaming aids. At past Historicons we have given away Revolutionary War armies, Napoleonic armies, WWII, Seven Years War, and American Civil War.   And we wouldn't have been able to if it were for generous donations of old armies,  new unpainted forces, and monetary contributions from wargamers from all over.  So many thanks go out to all those who have helped make this project a possibility! 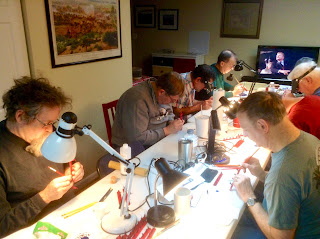 This year we are doing a Franco-Prussian War project;  and so 10 of us got together on Saturday at Duncan's house to put our brushes to almost 500 15mm French.  Duncan had taken the time to prime them in red beforehand so their pants, hats, and epaulettes were already taken care of.  There was also several sticks of Turco Zouaves that Duncan pre-primered  in their medium blue uniform color . 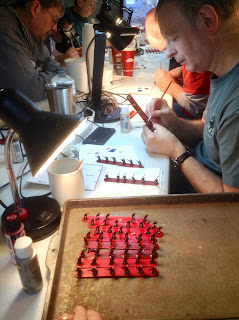 We set to work, with some good old war movies on the TV, and plenty of good hobby talk among friends, to entertain us.  At the end of 7 long hours, with cramped hands and stiff backs, we were able to claim victory: 500 French complete!   Up next we will be gathering to tackle their Prussian opponents. 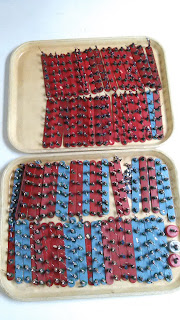