Temple of the Sorceress of the Sea: A Ghost Archipelago Terrain Build

Over the past few weeks I've slowly been assembling and painting a terrain piece made up of various toy and craft bits, that I call the Temple of the Sorceress of the Sea.
It all started back at Cold Wars in March, where I found a large action figure of a unidentified female sorceress or superhero.  So I stacked some pieces together, not gluing anything, just getting a feel for how I like the arrangement.  The base is a sand mold form the Dollar Tree, and then figure is standing on an orange juice lid and a wooden base. 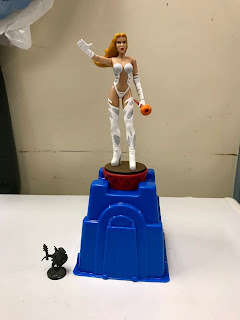 I liked how it looked, so I began the assembly. I mounted the sorceress to the wood disc by putting screws up through her feet.  I then glued the wood disc to the juice lid.     After that, I superglued together the scepter, and added a little seashell to the top to help sell the sea soreceress theme.  I also superglued all her arm and leg joints to help hold them in place. 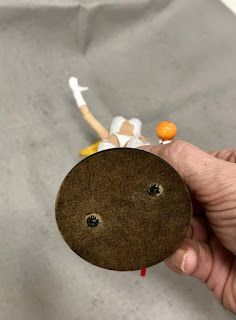 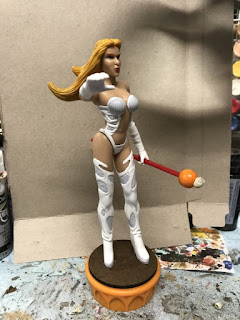 I had ordered a pack of cheap sea creature charms on eBay for this project, and glued some as decorations onto the base .   At that point I decided I wanted to get some small conical seashells to top the crenelations on the four corners. 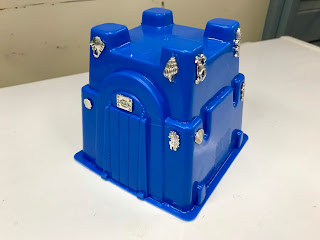 They didn’t have the ideal size I was looking for, so I settled on something a little larger. I had to trim the bottoms down anyway so they’d sit flat, and that reduced their size. 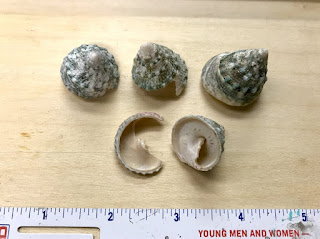 I then glued them to the four crenellations, and put it all together to see how it looked. 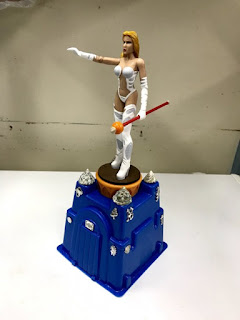 I then primed the top piece with Army Painter "Necrotic Flesh"  (It's my go to spray primer for unknown plastics), and I primed the temple with Rustoleum Paint and Primer "Flat Black".  With paint on it, I realized there were a couple problems I needed to correct on the statue; first there were noticeable gaps between her thigh joints and where they connect to her lower body which I needed to fill, and secondly I noticed the hinges on her elbows were very obvious now and needed to be covered over.  So I greenstuffed the elbows and thigh joints of the statue, as well as a large gap in one of the shell crenelations on the temple. I also applied a Mod Podge coat to the temple base to give the smooth surface some texture. 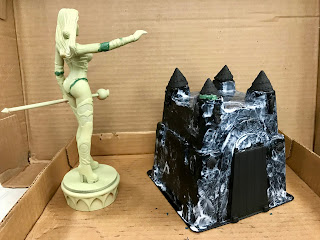 Then, when the Mod Podge dried, I did the dry-brushing on the structure and the statue base.  Dark, medium, and light gray; followed by a last white highlight application. 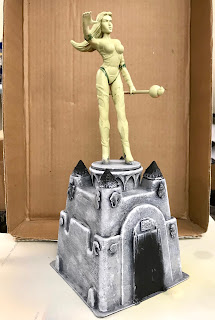 I then painted the statue, crenelations, and sea life decorations all with a verdigris bronze look. Then I did the doors as weathered wood, and the chains and hinges as weathered metal.
Here is the final results. 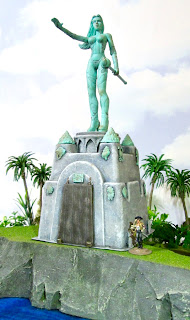 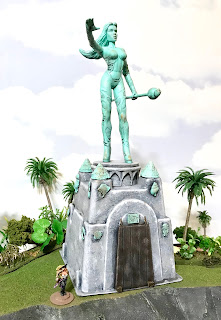 I always pictured in my mind, the temple standing above a cliff face with the giant statue looking out over the waves.  There's a door in the back for access, and another on the front which, drawbridge style, opens out over the sea providing a platform for the acolytes to stand on and do their magic.
I'm really pleased with how this turned out.  I may add some vines or such to the walls, but I would hate to mess it up some way.
Posted by Chris Palmer at 12:00 PM