This month the HAWKs have kicked off their 2013 Armies for Kids project. This year, the club is painting up several hundred 54mm Plastic ACW figures that were donated to the project by gamer Randy Seybert. The club plans to organize these figures  into skirmish armies that will be distributed to kids who take part in a specially designated four player game at Historicon 2013 wargame convention in Fredericksburg, VA.  The plan now is for each of the four kids who participates in the game to get two 20-man units, a cannon, and a mounted officer for both the Union and Confederates. 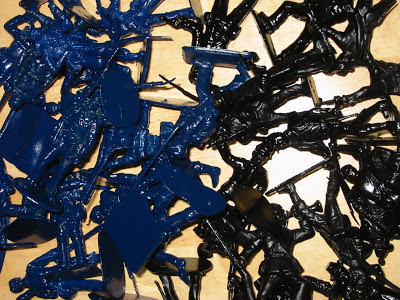 The HAWKS began by having club member Buck Surdu  spray prime all the figures with Krylon Fusion spray paint, half in blue, half in black. Then each club member took home a couple units to paint on their own time.  The club then plans to have a couple painting-bees after the Cold Wars convention to wrap up the painting for this project.

Each figure will receive a simple drybrush and block style paint job, before being mounted on an individual base.
This is the third year for the HAWKs to participate in their annual Armies for Kids project.  In the past two years they have given away a couple dozen 28mm AWI and 15mm SYW armies, representing over 1000 painted figures, to kids attending Historicon and playing in the club's Armies for Kids games.
﻿
Posted by Chris Palmer at 11:36 AM