As I mentioned in my previous post, I made a trip to the local Dollar Tree store this past weekend, and found some neat items for making some terrain.  I had been wanting to make some primitive looking huts to represent Goblin houses for an upcoming scenario involving my 10mm Goblin forces, so I was keeping my eyes open for material I could use.
The first thing I found was this great fibrous Easter grass, that would work great for thatch, as well as grass tufts for figure bases. 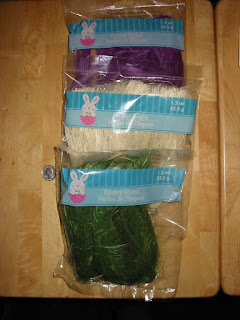 Next I found these Seed Starter pots that were made from a pressed paper pulp material and had a great natural texture.  I thought if I cut these down they would make a great 10mm mud hut.
So, I got to work. First I cut one of the Seed Starter pots down to about 3/4 of an inch high. I then went outside and got some small twigs and cut those into 3/4 inch sections. After I did that, I split each twig section lengthwise to make two half-twig pieces. I then glued four of these at approximately equal distances around the pot to form log supports.
Next, I took some of the Easter grass and cut it into short lengths and glued it to the top of the "hut", leaving the drain hole in the pot uncovered to represent a fire smoke vent. Then as a final step I made a small door out of flat toothpick sections.

After all the glue had dried, I sprayed the whole thing black. 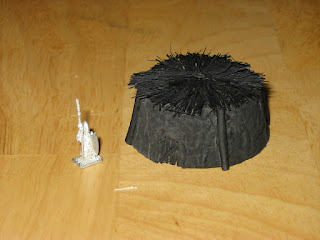 The final step was to paint the finished hut.  I dry-brushed it with a series of darker to light mud tones. Then I painted the wood in slightly grayer browns.  Finally I dry-brushed the thatch a series of darker to lighter yellows.
I'm really pleased with how these turned out, and they are quick and simple to make.
Posted by Chris Palmer at 4:17 PM