Recent 10mm: A Hero, a Leader , and an Elemental

I recently completed some 10mm fantasy figures which included a Lizardman Hero, A Fire Elemental, and a Cursed Knight Leader.
I had a leftover Lizardman figure (I believe he was made by A.I.M.) and thought that he bared a striking resemblance to  a certain purple TV Dinosaur, so couldn't help but paint him up as the great Lizardman Hero, B'uar-Nee! 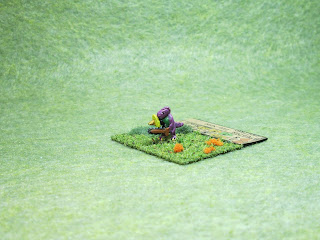 Recently I painted three  28mm Barrow Wardens from Reaper's Bones line, and was really pleased with the results. So I thought I would experiment with a Warmaster Chaos Leader I had, to see if the rust effect I had used on the Barrow Wardens, would translate to 10mm.  I'm very pleased with the results, and think I will now paint a unit of Chaos Knights I have as this sort of "Cursed Knight" look. 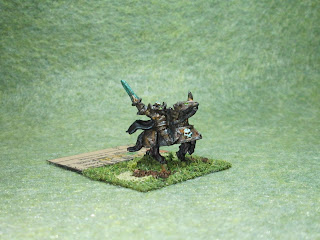 I don't know who made this figure.  I received  it in a short-lived birthday figure exchange I was part of a few years ago, and since it was 15mm (I think) I never did anything with it.  I came across it the other day; and not knowing what it was supposed to be, was struck by how the sculpted "fur" ?  looked a lot like flames on it.  So I decided to paint him up like a fire elemental.  I think the result is pretty good. 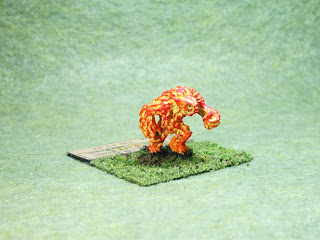