This week I completed the latest (in a long time!) addition to my North Polenburg imagi-nation army: the first squadron of the 25th Hussars, also known as "The Tannenbaum Regment" for their distinctive fir tree emblazoned standard. The figures are 40mm homecasts, cast from a Meisterzinn semi-round mold. 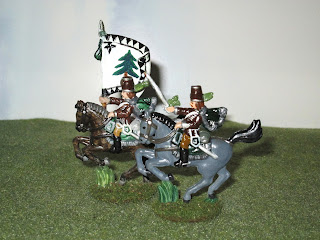 The troops will be part of my North Polenburg army for the HAWKs "Not Quite the Seven Years War" (NQSYW) imagi-nation project. Hopefully they will see their first action later this month during a battle scheduled on the 29th of June. 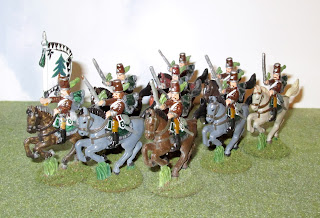