HAWKs' Historicon 2013 "Armies For Kids" Project is a Big Success.

The HAWKs ran their third annual "Armies for Kids" project game at Historicon on Saturday afternoon.  The game was held as part of the HAWKs' Kids Table program in which the club runs a series of games designed especially for kids on two specially designated tables all day Friday and Saturday at the con.  Eric Schlegel volunteered to run the "Armies for Kids" game this year, and he had a full house of five eager players.
This year's project was Civil War themed and each kid was awarded complete 54mm Union and Confederate Armies as well as a box of terrain, after the game. During the game, Eric asked players ACW trivia, and those that got the right answer got special bonuses in the game.
The kids played using the exact same armies, and some of the terrain, that they were going to be presented with. The young generals had a great time, as did the onlooking parents. And it was great to see the future of the hobby involved in the game. 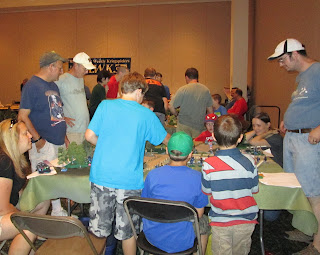 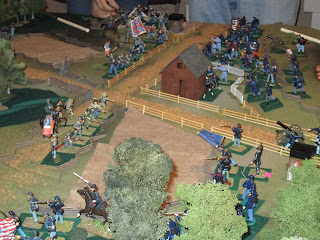 After the game the kids were delighted to get their armies, several not realizing that they were going to get free armies in this game.

The club is already making plans for next year.  We hope to have two games, one of which will be 28mm/30mm Napoleonics, and the other 20mm ACW.  If you have any figures, terrain, or game aids you'd like to donate, please let me know.  cnjpalmer@aol.com
Posted by Chris Palmer at 10:50 AM