I've had the chance to work a bit on my Pirate Teddy Bear Duck Ship this past week, and thought I'd post some photos of my progress.   Below is a picture of the plastic duck shaped watering can that I got at Target, that I am using for the basis of my ship. 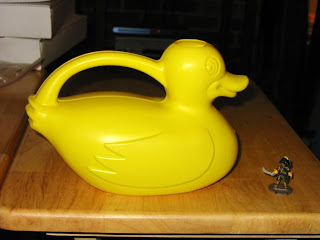 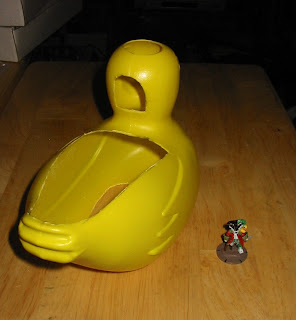 My next step was to cut out a cardboard deck to fit in the back.  At first, my plan was to use this as  the main deck, but after I glued it in place I noticed it had a bad slope in it so I decided to use it as an under-decking for a proper wood plank deck.  At this time I also took a spare metal cannon I had, and glued it into the spout in the duck's bill.  I used E-6000 glue for all the gluing of parts to the duck's plastic body, and Tacky glue for gluing cardboard and wood together. 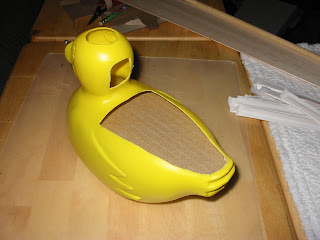 I glued some popsicle sticks I cut to fit onto the cardboard deck to correct the slope, then cut planks from a sheet of balsa and glued them in place.  Next, I cut a cardboard oval, and glued it into the top of the duck's head to make the crow's nest. 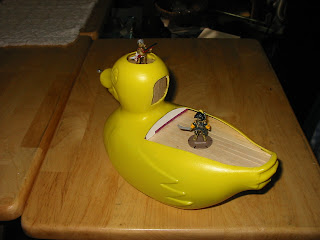 I then cut a piece of cardboard to fill the area between the deck and the top of the duck's back. Finally I cut a door to fit in the doorway at the back of the ducks head. 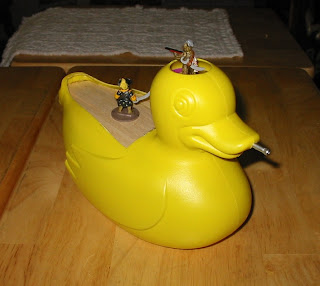 My next step will be to glue on hatches and a mast, and then move on to to painting it.
Posted by Chris Palmer at 11:11 AM