2mm VSF for Historicon: The Germans

I'm busy painting and basing a lot of 2mm stuff for my "Look, Sarge, It's Mars" game at Historicon. I'm going to be using a modified version of our "Look, Sarge, No Charts: ACW" rules and the great Land Ironclads and Aeronef models from Brigade Models
and 2mm infantry from Irregular Miniatures

With these rules each stand equals a regiment of infantry or cavalry, a battery of 4-6 guns,or 4-6 land ironclads or aeronefs.
Note that in the photos below, there is a strip of bare base where eventually the LSNC labels will be located once I have made a final determination of each unit's stats. The stands are 3 inches across by 1.5 inches deep for units, and 1.5 by 1.5 for HQs and batteries. The size of the stands will help give you a sense of scale for the minis
I will start by showcasing example bases for the Germans. Later I will show the British. Enjoy: 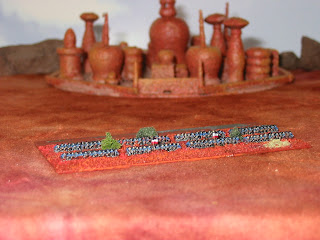 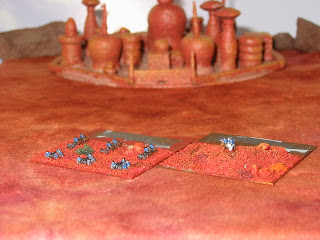 Battery of Artillery and Brigade HQ 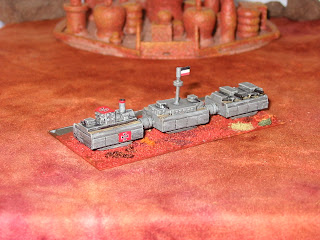 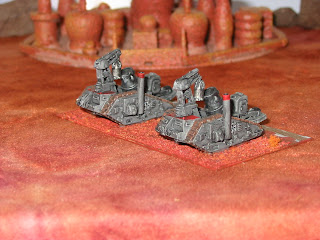 Self Propelled Heavy Artillery (Converted from GW Epic vehicles with the simple addition of smokestacks.) 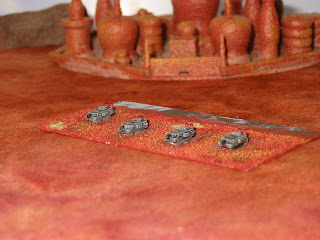 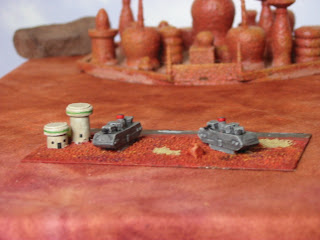 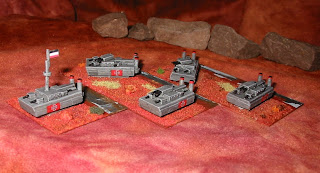 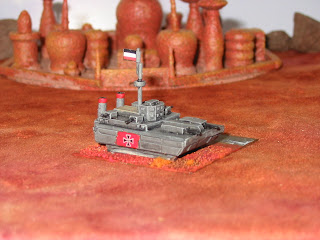 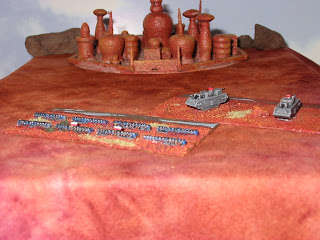 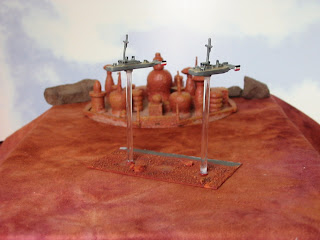 Posted by Chris Palmer at 4:46 PM No comments: 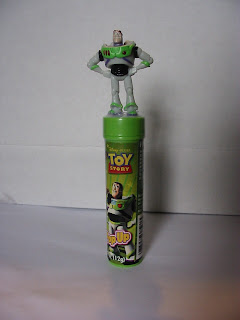 I found this push style lollipop at the local Walgreen's and was struck by the similarity of Buzz Lightyear's armor to a Space Marine's uniform. (I must admit I had never really studied Buzz Lightyear's armor pattern before.) So, I bought a couple to experiment converting, with some leftover Space Marine bits I had, into a more properly accoutremented marine.
Unfortunately, the figure measures about 45mm, so won't quite fit in with regular Space Marines unless you consider him some super-sized hero. But, it will certainly make a nice display piece... or a good figure to intimidate you enemies with as they wonder what he knows that he's smiling so much. I began by cutting him free of the candy container. Then I trimmed off his backpack, which was a bit too flat and non-standard marine issue to be of use. The plastic was soft and a hobby blade worked on it easily. I also cut off his left hand to affix a weapon. I envisioned the great juxtaposition of him, with his big stupid grin, wielding a chain sword. Trimming the hand off was a little difficult as it was attached directly to his belt. Next, I glued him to a standard black plastic base. I then began gluing on the bits. I used E6000 glue to affix the Space Marine bits, as the figure is molded out of a softer plastic, that I knew regular hard plastic glue wouldn't work. 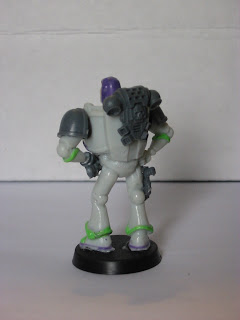 I gave him, a chain sword, as mentioned before, shoulder pads, a new backpack, and a holstered pistol. I also gave him a nice cluster of purity seals, as I figured Buzz, being G-rated, is surely one of the purest of Space Marines. The chainsword needed a bit of trimming to fit in the narrow area between his wrist and belt. The rest of the pieces fit easily, with no adjustment.
Now, I need to paint him. I think I am going to do him as an Ultramarine. I'll show the results in a couple weeks.
Posted by Chris Palmer at 7:12 PM 2 comments: 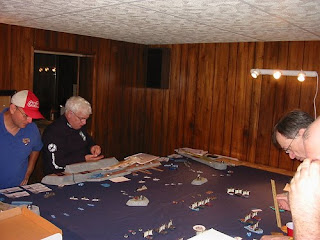 I recently hosted a games day for our club, at which I ran an Uncharted Seas scenario. The scenario involved an Orc raid on a Dwarven mining/port facility. For this scenario I constructed out of pink and blue foam scraps three key terrain features: the base of the harbor, where the mines and port were located, and two land arms reaching out into the harbor. I also made two small islands to place in the mouth of the harbor. On the ends of each of the arms, and on each island I put a turret. 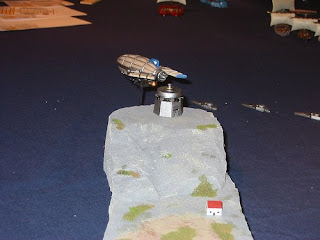 The turrets were constructed out of travel-sized dental floss containers with round plastic coffee stirrer guns, and a washer and plastic base for the top. On the top of the plastic base, I glued the back for a pierced earring. This has a small hole in it in which I plan to eventually insert a flagpole and flag. 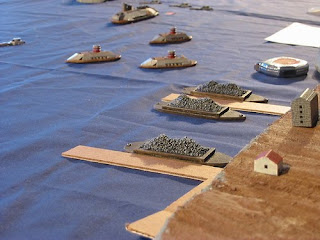 I also constructed three dwarf ore barges. I traced the hull outline of a standard dwarf cruiser onto a sheet of balsa to form the basic shape. Then used balsa strips to form the edges of the hold. I build up a small mound with pink foam scraps in the hold area, and then glued ballast over it. Finally, I painted them 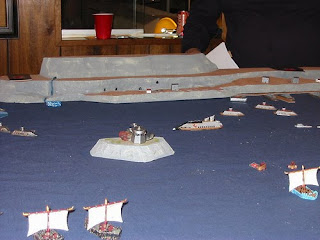 I did not get to complete the main harbor base in time for the game. Eventually, I hope to add more detailed mining structures and other buildings.
The game was a lot of fun, but turned out to be a bit lopsided in favor of the Orcs. One of the main problems was that I gave the turrets stats that were too weak, and the Orc Ships were able to quickly eliminate most of them at long range; before the Dwarves ever had a chance to fire them.
I plan to revisit this scenario, as the players really enjoyed it and I think it has great potential. I will keep you posted as it evolves.
Posted by Chris Palmer at 9:42 AM 3 comments: