This past Saturday, members of the HAWKs (Harford Area Weekly Kreigspielers) got together to work on painting a second Armies for Kids project for next year's Historicon.  The club had already decided to do a 40mm American Civil War project for Historicon 2015 based on generous donations from Maynard Creel, Ed Mohrmann, and Phil Kearnan.  And, since the ACW project was so far along, the club decided to start another quick and easy project based on a large box of assorted WWII plastic 1/72 infantry that had also been donated by Ed Mohrmann. 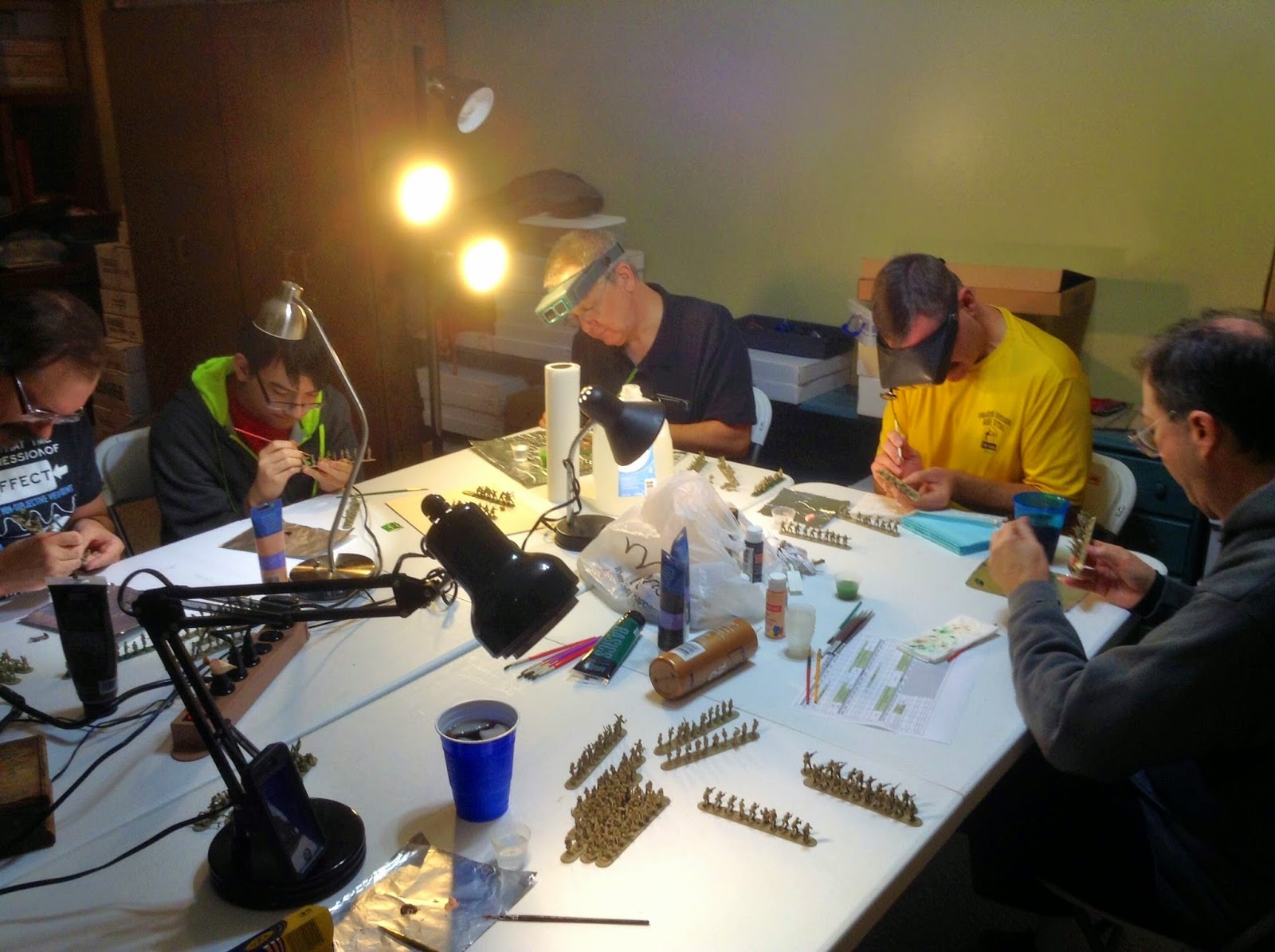 Hawks members Buck Surdu and Duncan Adams had spray primed the over 1500 plastic WWII figures with either khaki for Allies, or grey for Germans, and mounted them on sticks in preparation for Saturday's painting bee.   And for a few hours that morning we sat around and gave basic paint jobs to about 750, mainly American, Allied infantry.   After a late midday lunch break, with sore backs and cramped hands, the painters broke out the Red Dragon Inn game and played that to unwind. 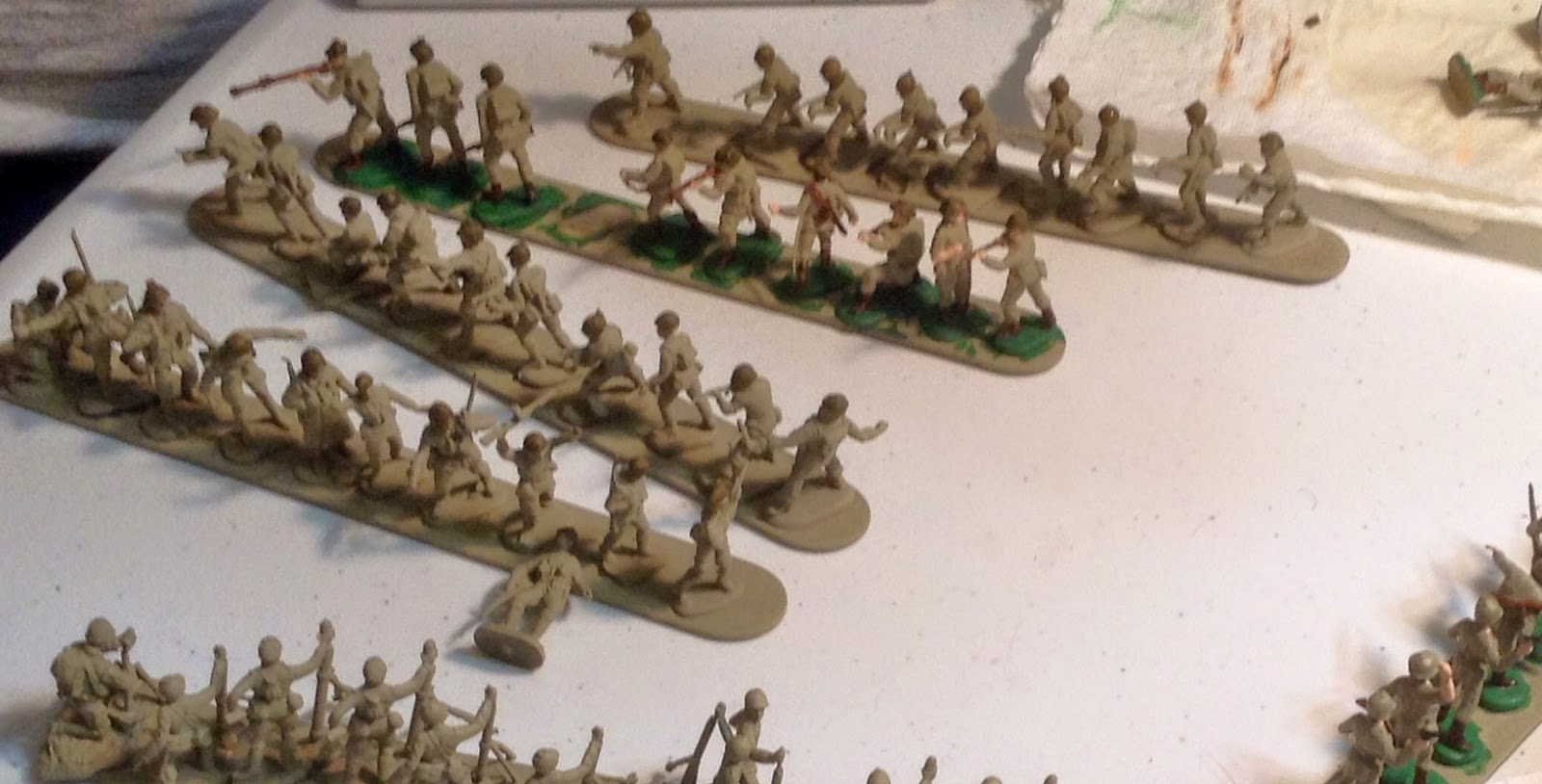 The plan now is to get together another time after the holidays to paint the German half of the project.  There were some support weapons included in the lot of figures, but what we'd really like is if someone could donated some 1/72 tanks, so each kid could get a tank with each army.  So, if anyone has some old tanks they no longer want, please let  us know.

This past Thursday, a group of Gamemasters from the HAWKs (Harford Area Weekly Kriegspielers) took part in an Army Senior Leader Professional Development session by running six historical wargames.
The set up for this event, organized by Sam Fuson,  was to run battles from six different eras in history using the same battlefield and the same order of battle (adjusted for historical differences in army compositions) and to see how differing technologies impacted the decision making of the commanders, strategies used,  and the outcomes of the battles.  Some of the goals of the event were team building, leadership training, decision making, and reinforcing the principles of battle.
I ran a battle set during the War of the Roses in the Medieval Period, Dave Wood ran a Napoleonic version, Eric Schlegel and Ed Duffy ran a battle set in American Civil War, Duncan Adams did a WWI setting, Same Fuson and Geoff Graff co-hosted the WWII table, and Kurt Schlegel GM'd the table with a version of the battle set in the Arab- Israeli War of '73. Buck Surdu acted as lead Gamemaster for the event, and rotated from table to table to observe the games so he could conduct a group discussion afterwards.  All the tabletop battlefields and armies were based on the terrain and armies of the actual battle of Quatre Bras from the Napoleonic period.
The participants: more than 60 Army officers, NCOs and senior civilian staff, where divided up and each assigned to a table, with a senior officer and civilian taking the command of  each side in the battle, and others acting as their sub-commanders.   Four identical objective locations were marked on each of the tables with small flags,  The objectives started in control of the defenders, and it was the attackers' job to try and capture them. A fifth victory objective of eliminating more stands of enemy troops than you lost was also set.
The rules used for the games were all from the "Look, Sarge, No Charts" series of rules sets, including: "Bear Yourselves Valiantly"(Ancients & Medieval version), Fate of Battle (Napoleonic Version), A Union So Tested (ACW version) and "Look, Sarge, No Charts;WW (WWII version).  The WWI game used a modified combination of the ACW and WWII sets, and the Arab-Israeli War both used modified versions of the WWII set.  The figures used were either 10mm or 6mm and were from the collections of the gamemasters.
For many of the participants this was their first exposure to historical miniatures wargaming, yet most were able to quickly pick up the concepts and rules, and after a few turns were fully engrossed in the games and the command of their units.  There was lots of friendly trash-talk among the participants, as well as table-wide cheers and groans as fortunes rose and fell.
Everyone had a good time, including us, the gamemasters.  This is an event that I have taken part in now for 5 years, and seventh such events, and it is always a blast.  Thanks to Sam's efforts it is always well run, and the participants are always enthusiastic.

At 1430 hours, Buck called the time for the games to end.  The participants gathered in the center of the room and Buck led an after-action discussion.  Commanders were questioned about their mission goals and how well their objectives were met; obstacles that arose and insights that were gained.  The similarities and differences of command in the different eras were also looked at.
The HAWKs are already looking forward to our next chance to take part in another of these events.
For another report on this event, see Buck Surdu's Blog.
Posted by Chris Palmer at 11:27 AM 2 comments:

I was only able to get up to Fall-In for a short while this year, arriving Friday afternoon, and leaving Saturday afternoon.  Here are some shots I took of games being run in the HAWKs room.  I wasn't able to get a lot of photos, as I was busy running my own games both Friday night (Battle of Five Armies) and Saturday morning (Warring Roses in the Mist [War of the Roses]).
Fall-In marked the official release of our "Bear Yourselves Valiantly" rules for fantasy, ancients and medieval mass combat.  The release was a big success with our publisher, On Military Matters, selling out of all he copies they brought to the con.