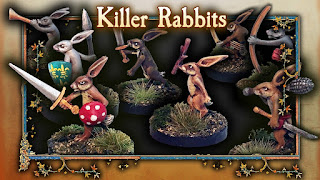 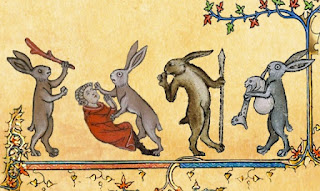 To check it out for yourself, see the main Kickstarter page here:  Killer Rabbits
Posted by Chris Palmer at 3:16 PM 2 comments:

Last Saturday we got together for the ninth game in our Ghost Archipelago campaign.  We had 6 of our regular 8 players in attendance.  We set up a home-grown scenario called "The Abandoned Mine".  The scenario featured an old mine in which a colony of Vampires (Imported from the Frostgrave Bestiary) had set up housekeeping.  We made up a simple Random Encounter Table that was heavy on undead types.  Situated between every pair of players was a central room  in which was located a coffin.  When the first figure enters the room, the Vampire arises from the coffin, and will move to fight whoever is closest.  (They could pursue figures out of the room once woken, as long as they moved towards the closest figure.  Players would get 50 Experience Points if their crew killed the Vampire, and they could get 10 Experience Points if they destroyed the Coffin by beating a Fight roll of 14. When the Coffin was destroyed the central treasure was placed in it's spot.  The players' other treasures were placed normally around the mine.    We used a 7'x3' table, set up with the mine constructed from tiles from the recent Secret Weapon "Terrainscape Dungeons: Mines" Kickstarter.  We used five of the Core Sets and a bunch of the Add-Ons from my and one of the other player's collections.
Instead of entry zones like we usually do, the table was set up with 6 mine entrances evenly spaced in pairs down each side of the table.  Players started with their figures just outside these entryways, and would need  to move their figures in through the entry tunnel beginning on the first turn.   I got the 5th choice of placement and was left with the choice of a spot across from Skorri, or one with hardly any treasures in easy reach.  Being an optimist, I picked the one across from my old nemesis Skorri Drakenburg; which put me in the lefthand corner of one side.   To my immediate right was the Heritor Robin Duck, his Warden Friar Duck, and his strange band of Duckmen.  Diagonally across to my front right was the Heritor Griffin, and his Warden, Ashalla.  At the far end of the table was  the Heritor Gregorious on my side, and across from him was the Heritor, Kragmar of the True Blood.
The Report

Well, that went about as good as could be expected when going up against Skorri.  And I'm rather pleased to have actually managed to get the Central Treasure.  I think this is only my second time (or possibly third) retrieving the Central prize.  And I didn't do too badly with casualties, getting half my crew out alive.
The scenario was a lot of fun.  There's a very different feel to the game when it's all confined to tunnels.   In retrospect, I think we should have started with a limited sight distance already in play since we were underground, but none of us thought of that before the game started, as we're just not used to it being an issue.  And, with the Cloud Cover in play from turn one, the situation was quickly corrected anyway.
Next time we return to the rulebook scenarios; skipping over "Swampland"  in October and doing "Saurian Breakfast" instead.  We will return to "Swampland" in November, and then our big Christmas Extravaganza in December.   It's hard to believe there are only 3 more months of this campaign!
Posted by Chris Palmer at 3:46 PM 2 comments:

Fall-In Playtest Day: Into the Abandoned Mine...

This past weekend we playtested a couple of of our games for the upcoming Fall-In convention that we will be running in the HAWKs room on Saturday.  They both used all my, and Buck Surdu's, Tablescapes Dungeon Mines terrain from the recent Kickstarter. (Tablescape Dungeon: Mines)  There were 5 Core Sets and a a bunch of extras in play.
I ran the first game, using the under-development Feudal Patrol rules.  This was a twist of a regular Dungeon Crawl type of game, with each player controlling a conventional party of adventurers.  Players started with their packs full of treasure at the back of the abandoned mine dungeon, and had to make it out alive; all the while being pursued by a very big monster they have disturbed.   Along the way, each player had a hand of a half dozen cards they could play on their fellow adventuring parties. These cards sprung traps, summoned monsters, and caused other mishaps to occur; all in an attempt to slow the other guys down, and make them drop the treasure they were carrying.  Whoever made it out fastest with the most treasure was the winner.

The second game, run by Buck, was a Weird War II outing featuring GIs investigating a secret Nazi lab hidden in an abandoned mine. The rules used were GASLIGHT.  Each player commanded a squad of American soldiers, while Giant Ants, Robots, , Nazis, and all sorts of other nasties awaited them.   The goal was to retrieve certain lab equipment and get it back out of the mine to safety.  Like the previous game, players had a handful of cards they could play on their fellow players in an attempt to slow them down.


Both games were a whole lot of fun with much laughter, good natured back-stabbing, and corny movie quotes.  We're really looking forward to running these on the Saturday at the convention in November.    There will also be a third game in this series Saturday night, featuring Doctor Who, and helmed by Greg Priebe.
Posted by Chris Palmer at 6:28 AM No comments: