Over the past several months I've slowly been gathering various inexpensive toys to help fill out the needed creatures for the Ghost Archipelago rules.    I thought I'd compile and share some of those efforts here.
A while back I purchased a second hand tub of plastic toy dinosaurs off of eBay, and have used them to make my Talonjacks and Stalkers. 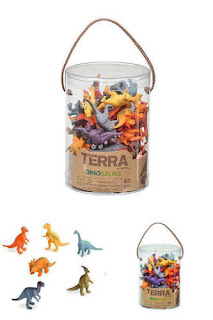 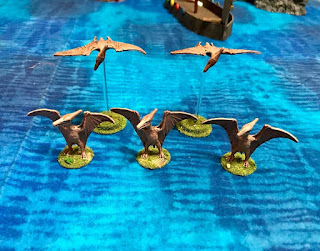 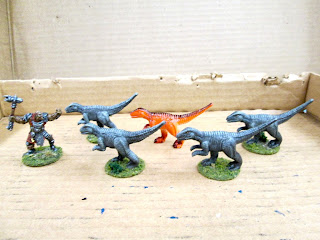 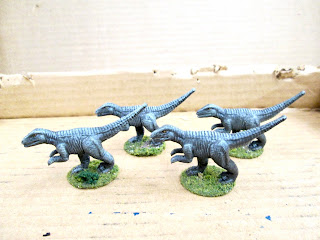 I also picked up a set of cheap plastic Sea-life toys on eBay, and converted them to be waterlined Shark figures. 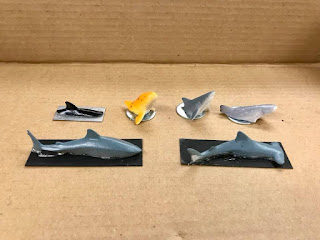 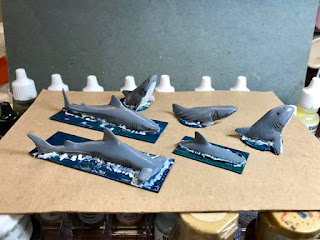 Lastly, I got some plastic Cocktail Monkeys (used to hang-on and identify cocktail glasses), and repainted them to be Screamer Monkeys. 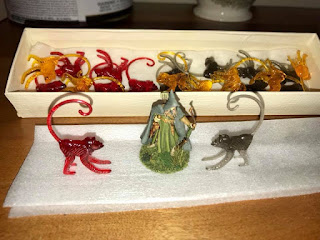 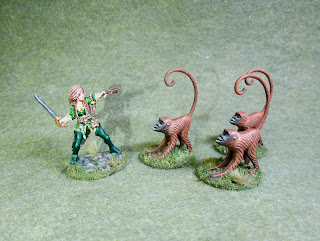 This past weekend we got together for the fifth game in our Ghost Archipelago campaign.  We had only 5 of our regular 8 players.  We continued to work on the scenarios in the rulebook, moving on to the third one: The Abandoned Watchtower.    We used a 6'x3' table and had two watchtowers with their Central Treasures on top.    With the odd number of players, we had to carefully place the watch towers so they were placed within equidistance of both the players on the two-player side of the table and the three player side of the table, so they were a little off from the centerline.
Unfortunately, Skorri Drakenburg and his Beast Warden, Agger, set up directly across from me.  I didn't look forward to a repeat of last month's debacle.   Kragmar of the True Blood, and his Storm Warden, Samael Gale set up to my right, and diagonally to my front right was the Heritor, Herndon,  and his Wave Warden, Arwhine.     I was lucky with my chip draw for starting location, getting first choice.  I picked one of the corners, down by the dark grey tower (as seen in the picture above), as there seemed to be a good chance at getting at least a couple treasures there; including one that was easily within a single move away.  There were two in a pair of low ruins to the left of the tower, another in a patch of jungle between the ruins and the tower, and a fourth atop a rocky outcropping to my front right of the tower. And, of course there was the central treasure on top of the tower.

To read my report from the previous game, see: The Floating Hulks

To read Skorri's report from this game, see: The Abandoned Watchtowers

What a fiasco!  In my defense, I did really well about keeping my party in groups of four (Heritor +3 and Warden +3)  Plus my two extra Crewmen stuck together.  However, I never expected to run into a group of 8 with one of my group, which Skorri had done. (Actually 9 if you count the Wasp he summoned.)
It was particularly aggravating also that Meri got within a move of exiting the table with her treasure when the Archer's finally brought her down.  Shades of the loss of the Drichean Prisoner all over again...
Of course, it also didn't help that I couldn't roll to save myself at all the entire game.  Luckily, Kragmar and I had an informal truce for most of the game, brought about mainly by the simple fact that our start zones were rather far apart.
I now find myself in the interesting situation that since my Heritor hasn't been getting treasures, or killing hardly anybody, but my Warden has been casting spells consistently each game, that she is almost equal in Experience points with my Heritor.  In fact, if she hadn't been taken out on the second turn this game, she would have surpassed her Uncle!
As always, I can do nothing but set my eye on the next game.  I think I am going to have to just keep my entire 10 member party together in one big group, to be better able to face whatever comes my way.
Posted by Chris Palmer at 2:59 PM 2 comments: