I just wanted to give you all a heads up about this exciting new set of rules by Buck Surdu.  I had a chance to take part in the playtesting for theses, and I can say that they really are fun and innovative.

After nearly three years of development, Combat Patrol™ is nearing completion.  The game features some really innovative mechanics that streamline play and reduce table cutter.  I have also play tested it in numerous convention games.  My gaming group has even begun adapting it to other historical periods.  There are many good WWII skirmish rules on the market.  So what makes this interesting and unique?

In developing Combat Patrol™ I developed the G.A.M.E.R.™ “engine.”  Key features of the engine are:

Combat Patrol™ will soon be available through DriveThruCards on durable, premium stock cards.  It is helpful for each player or pair of players to have an Action Deck to speed play.  On DriveThru customers may purchase either set A or set B of the cards.  Each set includes four Action Decks (supporting four to eight players), with different colored backs to keep them separated, and an Activation Deck.  Purchasing both set A and set B will give you eight different backs, supporting eight to sixteen players for those really large games.  The basic rules and an introductory scenario will be a free .pdf download from DriveThru as well.  The advanced rules and vehicle rules will be a second download.  In this way, the rules will be available worldwide without customers having to hunt for them in retail outlets.

Because everything will be downloadable, there won’t be a glossy hard-cover book full of eye candy.  It’s just a solid set of rules that has gone through several years of development and testing.  I think, however, if people give the rules a try, they will really see how Combat Patrol™ results in a streamlined, enjoyable World War II skirmish game with all the nuances of any other set of rules but with most of the complexity removed.

GALACTA: Another Trip Down Memory Lane

In a recent discussion on the Reaper Forum ,the topic came up of the old Sci-Fi miniatures game called "GALACTA", which was produced by Heritage Miniatures.  I got the basic game set for this game for Christmas in either 1980 or '81, and I can remember spending a good part of Christmas afternoon painting the figures.

So, I was inspired to dig my old GALACTA figures out of a box full of assorted gaming stuff I never use, and look through some cabinet drawers to find where I had stuffed the old rules sheets; and spend a little while with my memories from the beginning years of my journey in the hobby of miniatures gaming.  While not the first miniatures I ever owned (that would be 15mm ACW) , these were certainly some of the earliest, and in turn some of the earliest figure painting I ever did that I still own. Needless to say, my skills have improved in the past 35 years. And, I truly think there is a certain charm and character to these old sculpts.  In fact, I'm happy to report some of these old warriors still are part of my current armies.  The "Octopoid" figures that I got in that first basic set, still make up part of my force of Wellsian Martians for my VSF on Mars armies.

One of the special slates of games the HAWKs will be hosting at Fall-In is a series of  5 battles all taking place on the same city terrain set up.  Some of the members got together this past Saturday to run a couple of playtest games to test the city layout and a pair of the scenarios.
The first was a WWII game using GAMER rules, run by Eric, that had Canadians trying to take a German held town in Holland in January '44.

The second game had a more fanciful setting; this scenario involved forces of evil goblins trying to take control of Santa's village while the big guy was away, using GASLIGHT rules, and run by Kurt.


Both games were enjoyable for the players, and the GMs got to see what tweaks they need to make to their scenarios.
Posted by Chris Palmer at 9:09 AM No comments:

The Shrunken City of Summergrove: An Aquarium Terrain Conversion Project

A few years ago the local Petco pet store moved to a new location, and when the old store was closing they had a big clearance on everything. Preferring to sell the old store's stock rather than move it.  Everything started at 25% off, and as the weeks went by the discount grew. When things got down to around 75% off, I went in to see what was left in the aquarium decoration department, and one of the things I got was this nifty little tiny castle on a pedestal.  For those that are interested, its item number is: PETCO 1095811. A quick look on Google reveled that it was actually part of a series of 4 with differing castles on top, and it looks like there are still some around for sale.
I had stuck it in a cabinet not really having a specific use for it, or knowing what to do with it exactly.  Then when I recently got my Frostgrave rulebook one of the things I enjoyed reading in it were the little sidebar notes of supposed quotes from adventurers in the city; telling about some of the odd things they had seen on their excursions, such as a naked woman frozen in a block of ice, and a horde of rampaging stone hands.  The idea came to me that my little city might be a perfect such oddity to have in my version of Frostgrave. And so the idea for the fabled Shrunken city of Summergrove was born.  Perhaps a neighboring city at one time who had run afoul of a powerful wizard from Frostgrave; who got his revenge by shrinking the city and entrapping it in a glass dome.
The aquarium piece wold have been fine as it was, but I felt it stood too tall for use with 28mm figures. So, the first thing I had to do was separate the top from the bottom.  I managed this with a little effort with a hammer and chisel.  Unfortunately, in my enthusiasm I damaged some of the city buildings in doing this, so be careful if any of you try.   After I had separated the top from it's pedestal, I drilled a hole in the underside to accept a standard clear flight-stand peg.  I then got a spare large round plastic base I had, and drilled a hole for the bottom of the flight-stand peg into it.  I then gave the base a top of paving stones cut from thin cardboard and glued in place.  After that, I sprayed the base flat black and then drybrushed the stones with various shades of grey.  When the base was dry, I glued the base, flight-stand, and castle together.
To make the dome, I dug out an old top from a bubblegum-machine prize that I had saved.  The rocky piece the castle sits on wasn't quite big enough, or circular enough, for the dome to fit well, so I had to use some Milliput to build the back out a bit to fit the dome (see photo above). I also used the Milliput to fix some of the buildings I had broken while separating the top form the original pedestal.
After I fixed the buildings I painted my repairs to match, and then gave the castle a wash with dark brown ink to bring out the detail.  I also painted he extended platform I had added to match the existing one. Lastly, I glued on the dome.
I'm really pleased with how this turned out.  I think I will use it as a floating obstacle, moving randomly across the table.  It could also be used as an interesting objective in a scenario.
Posted by Chris Palmer at 5:37 PM 4 comments:

I picked up a couple items during a recent trip to the local Dollar Tree store to use in my Forstgrave games.  The first is a bag of white rocks that will be good for scattering in piles here and there, and the second is one of their Tombstone  Corner Halloween scenery pieces. Folks who read the blog regularly will remember I recently converted one of the "Bone Gazebos" for use in regular non-frozen fantasy games. 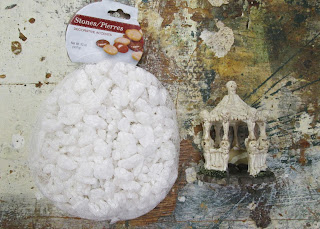 Since Frostgrave is a ruined city, and since I didn't want this looking exactly like a bone gazebo; carefully using a hammer and a chisel, I  knocked out the pillars until the top broke off. 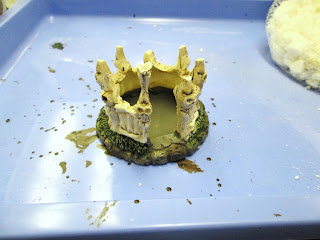 I then sprayed the whole thing with flat black primer and drybrushed it with assorted grey tones and painted the base white.  Afterwards, I flocked the bottom with Woodland Scenics Snow flock. 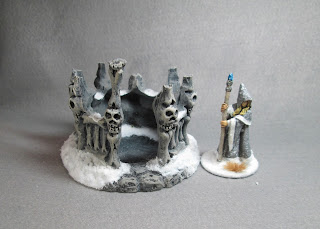 For the price of a dollar, and a very quick conversion, I think it makes a dandy piece of  terrain to add clutter to my Frostgrave table.
Posted by Chris Palmer at 8:06 AM 4 comments: 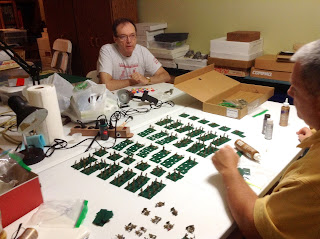 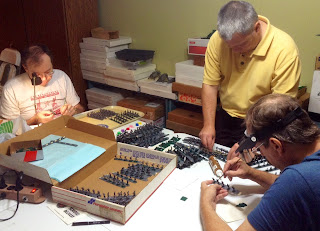 The HAWKs also finalized their plans for next year's Historicon Armies for Kids project, which will be 20mm ACW; based on the personal collections of HAWKs members Buck Surdu and myself.  If anyone has painted 20mm ACW to donateto the project, please contact me at CNJPalmer at aol dot com.
Posted by Chris Palmer at 10:34 AM 4 comments: