Author's Note: I am aware of the rule that any magic items that are carried by a character that is killed are lost. And so I assumed was the fate of the magic sword Elessa; until, by chance, while rolling for treasure after the game I got a magic weapon/armor result (Roll of 9: 40 GC and Magic weapon/armor roll) . I then went to the magic weapon/armor table and rolled; and was surprised as could be when I rolled a 5: two-handed weapon +1 dam.  I knew it had to be fate that I rolled almost the exact weapon I had lost, with a slight exception: I rolled a +1 Damage 2-handed weapon, where as Elessa had been a +1 Fight 2-handed weapon.  Almost immediately my imagination kicked in and I started weaving the narrative of how the sword had come to change.  So, technically in terms of the game, the sword was left behind, and was replaced by the one I rolled for on the treasure table, but from a narrative sense I made it the same sword.
It has to be one of the most exciting and memorable games I've played in.  From Riessa's death on turn 1, to Leighlyndana's fighting and dispatching 3 of the Druid's warband in a multi-turn slugfest before being taken out herself, to the unpredictability of the Teleport Pads, and soldiers from different warbands ending up all over the table; it was a real nail-biter through and through.  It was also one of the most frustrating games as we all soon realized that there was hardly any treasure to be had easily, and riding the Teleport Pad system turned out to be the best way to get treasure...if you could survive it.

Over the past couple weeks I have been working on making a Ruined Wizard's Tower out of 3 hexagonal gift boxes that I bought at the local Dollar Tree store.  For a while I had been contemplating how to make a traditionally cylindrical wizards tower out of the cork tiles I've been using to make my Frostgrave buildings; and all attempts at bending the cork into a tightly curved shape had been unsuccessful.  Then it hit me that I could possibly use a multi-sided geometric shape to give the idea of a circular tower without it actually bring curved.  I just needed to find a form to work from, as doing such a complicated structure freehand, making all the sides, angles, and measurements come out right with my measuring and cutting skills, would be difficult.
And then I found these boxes... 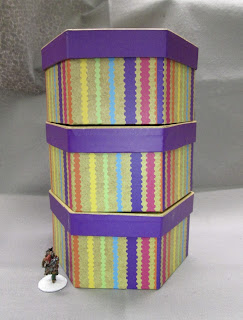 I began by cutting the boxes into a rough ruined tower shape, and then glued the lids of each box to the underside of the box above it, so the tower could be easily taken apart and reassembled. I also glued the "ground floor" box to a cork base. 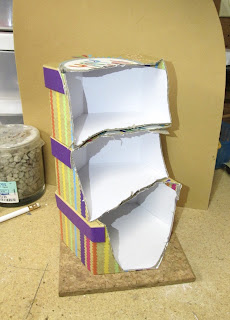 I then began covering  the sides of each "floor" of the tower with sections of cork tile. 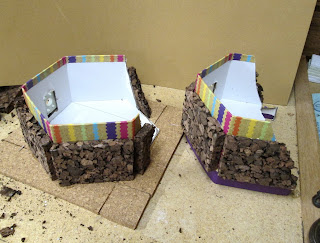 Since the box lids stuck out a little further than the walls of each box, I covered the edges of the lids with sections of pink insulation foam carved to look like rows of stone blocks. I also cut sections of dowels to fit in the joints between the cork wall sections. 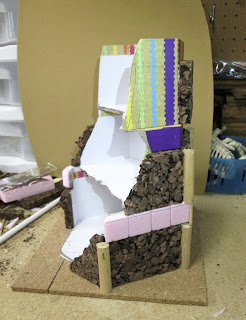 I glued some old plaster window frames I had into holes I cut in one of the walls on each floor.   On the top floor I build the framework of an old roof using balsa wood and shingles cut from cardboard. 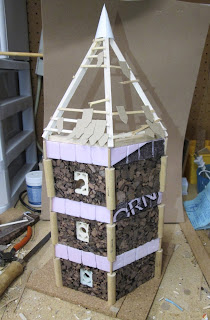 Inside the tower, I cut cardboard flagstones for the ground floor, and used balsa strips to make floor planks for the other three floors. 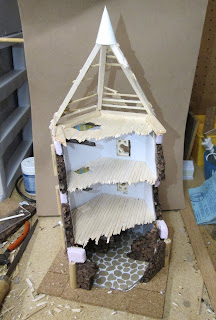 On the ground floor I also added some interior walls, and the ruins of a wood stair case. 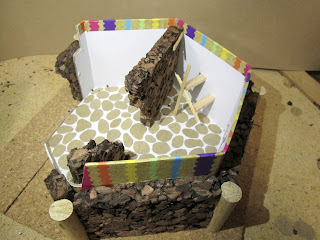 My last construction step was to add rubble and debris all over the base of the tower, and a little on each floor. 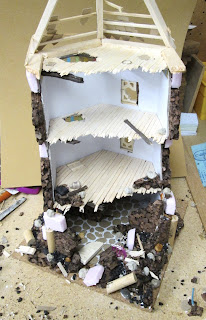 After all the glue was dry, I sprayed the entire thing with black spray paint.  When that was dry, I began drybrushing the stonework with dark grey paint. 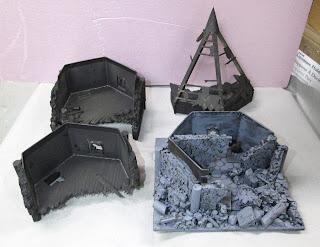 And here is the end result, shown with a Reaper 28mm figure for scale: 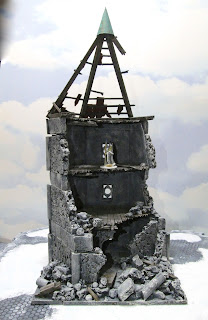 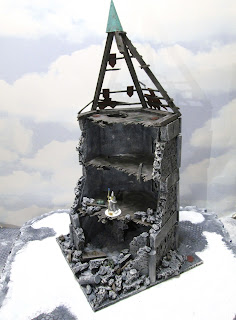 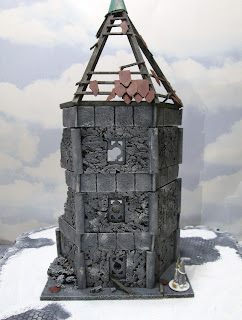 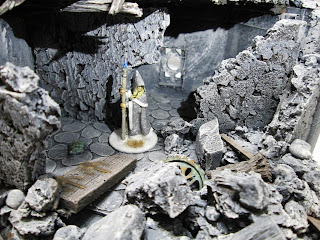 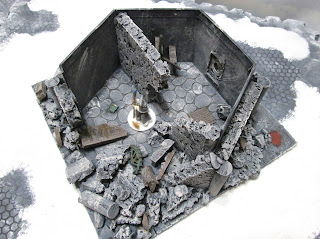 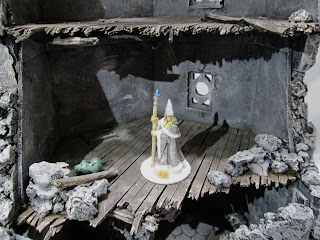 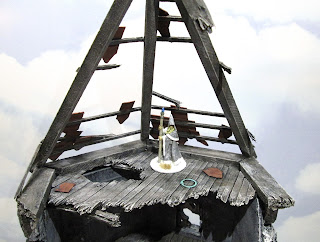 I'm really happy with how this turned out, and look forward to using it in this Saturday's Frostgrave game.
Posted by Chris Palmer at 8:26 AM 14 comments:

A bunch of the HAWKs got together on Saturday to play in a couple games with the goal of testing out some new rules for some under-development rule writing projects.
The first was a WWII game using "Look, Sarge, No Charts: WWII" rules GM'd by Buck Surdu.  Even though this was a WWII game, the goal of playing it was to test out the concept of a cyber-phase for each turn, to be used in the upcoming "Look Sarge, No Charts; Sci-Fi/Near Future rulebook. 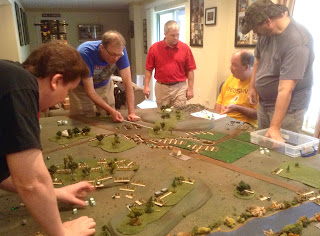 I was in command of a battalion of French infantry tasked with taking a town and nearby bridge from a German force occupying it.   The game turned out to be a real nail-biter with the battle going down to the final turns.   In the end, when we had to stop due to the time, the Germans still barely held both objectives, but it would just have been a matter of a few turns more before we captured both targets.
More importantly, we got a chance to see the cyber phase in action; and I think it worked really well.  While the first few turns were a relative stalemate cyber-wise, the French had some success late in the game in penetrating the German's computer network, causing some real headaches which prevented the Germans from getting reinforcements to the town. 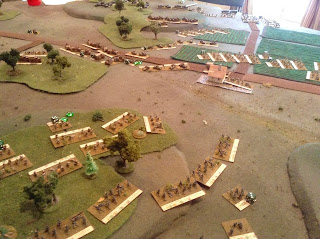 The second game was a War of 1812 scenario designed to test the new artillery rules for the upcoming Napoleonic supplement to "Combat Patrol", GM'd by Duncan Adams.  This game featured a small British held coastal town that was being raided by a force of Americans intent on gathering supplies for the approaching winter. 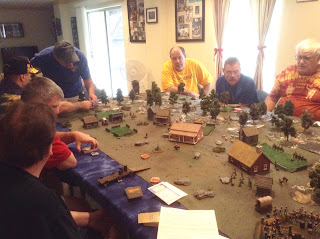 Overlooking the water was a 6-pounder cannon, which could be swung around to shoot inland as well.  I was put in command of the gun and a small garrison force for the redoubt where the gun was located.  Part of the American objectives were to put the gun out of action so they could move some small boats up the waterway to haul off any supplies they liberated.
At skirmish level, where canister range is almost the entire table, cannons are tricky things to incorporate.   Luckily the Americana's had lots of cover to hide behind.  I was able to get one shot off at a unit in the open, moving between patches of cover, with devastating results. A second shot went high, and a third shot did some hurt on a unit in a patch of woods. 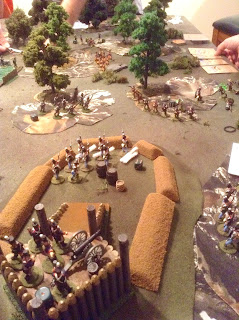 In the end I still had control of the cannon, but other sections of our perimeter had been badly chewed up, and the Americans were able to loot a large amount of supplies.  However, we still controlled the water, so they would have to haul their loot away the hard way by hand.
There was a third game after this, which was Star Wars using modified "Combat Patrol"; but unfortunately I had to leave at this point.  It was really fun day and the rules tests were deemed a success.
Posted by Chris Palmer at 9:22 AM No comments: