The HAWKS Room at Cold Wars on Saturday

Here are a few shots I took of some of the various games the HAWKS ran on Saturday at Cold Wars in Lancaster, PA.

Posted by Chris Palmer at 10:20 AM No comments:

Saturday night at Cold Wars, I ran my GASLIGHT game called "Happy Birthday, General Grant".  In this game Rebel raiders attack a birthday celebration for General Grant and attempt to achieve three goals:  1) Kidnap the General, 2) Steal the wagonload of whiskey at the party, and hijack the train containing the huge birthday cake that had been made for the General.
I had run this game before at last year's Fall-In, and it had been so much fun I thought I would give it another showing here at Cold Wars.   At Fall-In it had been a close run affair with the Union just managing a victory after winning a prolonged struggle over the unconscious body of General Grant.    The Rebels got the whisky wagon away, and the train stayed in Union hands.   In this running of the game, dismal Confederate dice rolling and amazingly hot Union dice rolling, meant that the Union denied all three victory conditions to the Rebel raiders.   However, everyone had fun; and that, as the GM, was the most satisfying thing.

In The HAWKs Room at Cold Wars on Friday

Here are a few shots I took of just some of the various games taking place on Friday in the HAWKs Room at Cold Wars, in Lancaster PA. , this past weekend.

Posted by Chris Palmer at 3:10 PM No comments:

Friday night at Cold Wars I ran my "Final Battle of the Elvish Frontier" mass-combat fantasy scenario using  Bear Yourselves Valiantly rules and 10mm figures.  The scenario had a column of Elven refugees and treasure wagons fleeing an army of Lizardman and Goblins that was approaching the Elven capital.  Part of the Lizardman/Goblin main force has branched off to intercept this juicy target, and the Elves have rushed a guard to protect it.  The scenario was designed for 6, and I had four players show up.  So I pitched in to help the Elvish side and took the third command, and had the Lizardmen/Goblin commanders divide their third command up among the two of them.

I had a great group of players, and had a blast GM-ing the game and running the Elves' flying relief column.  As a whole the Elves' dice rolling was miserable, and the Lizardman/Goblin commanders had dice that were hot. Eventually the Elves had been so beat up that there was nothing they could do anymore to stem the tide, so I called the game and declared the Lizardmen/Goblin commanders to be the winners.
Posted by Chris Palmer at 8:14 PM 2 comments:

I just wanted to announce the personal milestone of this blog having its 150,000 view over this past weekend.   As I approach the 6th anniversary of starting "One More Gaming Project" back in May of 2010, I can't help but think that a lot of the success of the blog has been due to the continued support and encouragement from my readers.  So, a big "Thank You!", to all of you.  And here's to the next 150.000 visitors, and the next 6 years!

This week I painted Reaper's"Drowned Spirit" figure to use as a wraith in my Frostgrave games.  This figure was newly released when I was planning my Frostgrave harbor terrain build and something about it just made it seem like the perfect fit to be a ghost to haunt the old harbor. So, I ordered it over the holidays, and just now got around to painting it.  I'm really pleased with how it turned out. 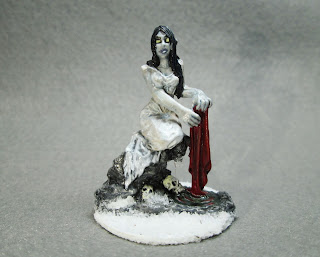 To help convey the frigid Frostgrave look, I added a Water Effects icicle under the rocky outcropping.  Also, I went with a glossy finish, instead of my usual matte, to help bring across the wet look. 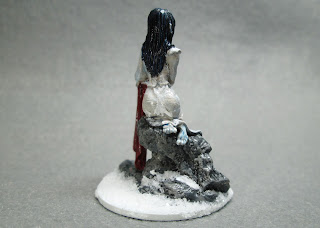 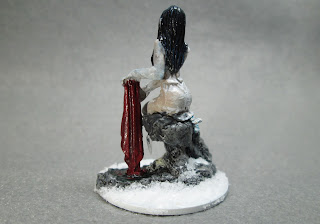 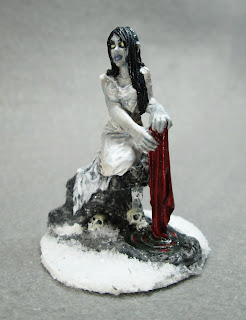 I whipped up another pair of Frostgrave treasure tokens this weekend after one of my blog readers, Brian, suggested using small scale 6mm figures as tiny golden statues in the comments of my previous treasure token post.  While I didn't have any 6mm figures I have a lot of left over 10mm figures sitting around to use for this.
Also, my friend Don Hogge mentioned at our last Frostgrave game the he had found in the Dollar Tree store some small round fingernail glitter that looked exactly like gold and silver coins; so I had gone to my local store and picked up some of this glitter and was looking for an opportunity to use it. 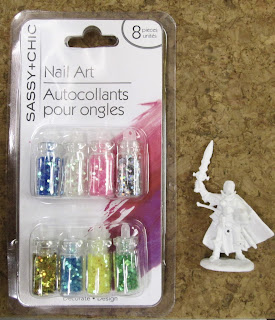 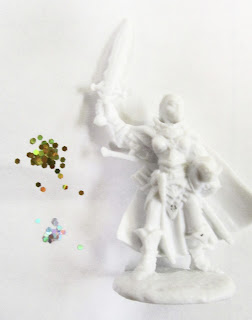 I had also picked up a small plastic dog figure that I had, at the time, thought of using as a war dog, but I ended up feeling that it was just a bit too cartoonish.  However, since it had a handle on its back, I thought it might make a nice golden vessel of some sort,
I used some of the tiny gems I had written about earlier on my Bones painting blog, and glued some of those along with the gold coin glitter, to the base of the golden dog vessel.  I glued the two 10mm figures on a long pedestal made of cork, and painted it to look like stone. 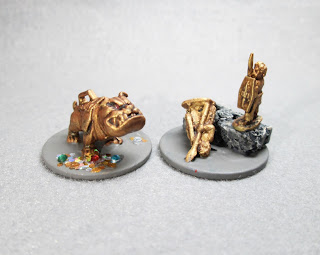 I'm very pleased with how these turned out.  They will be fun to use in our next game of Frostgrave.
Posted by Chris Palmer at 8:38 AM 4 comments:

Today we held the second game in our Frostgrave Campaign.  For an account of the first game see: Frostgrave Game 1.  For an account of the game following this one, see: Game 3. We had four of our seven players in attendance.
Once again, my Illusionist, Kodak, and his trusty apprentice, Cherowyn, found themselves. entering the city near the harbor.  A Chronomancer, known as The Doctor, also chose to search the harbor and Kodak's warband spent most of the game skirmishing with them.  The Doctor brought along three Crossbowmen and a Marksman, which played havoc with my Illusionist's warband, not to mention the Illusionist himself.
Just like last time,  it was not a good day for Kodak's party as they quickly found themselves pinned down by the massive firepower being brought against them from The Doctor's team.  It only got worse when some men from a nearby Druid's (Witch) warband started firing on them as well.  The final straw was when wandering creature rolls put a Minor Demon, and an Ice Spider directly in our rear.
In the end it was only the quick action of Cherowyn, who was able to fend off both wandering creatures long enough to cast a successful Mind Control spell on  the Doctor's Infantryman who was carrying a treasure, that netted us our only treasure of the game.
Several members of the party were incapacitated during he game, the worst being our new Treasure Hunter, Jaquailwyn (Jack), who had just joined our warband after the last game.  She was shot by The Doctor's apprentice, River Song, who used her laser pistol (Elemental Bolt spell) killing the unfortunate Treasure Hunter dead.   The other bad casualty was Kodak himself, taken out by one of The Doctor's crossbowmen.  Though Kodak  recovered himself without any permanent injury, it was such a Close Call that he apparently became disoriented and left his new Staff of Power behind in the ruins.   Luckily he had had the chance to use the staff once to boost a near successful Mind Control spell of his own.
Though the team was only able to recover one treasure, they were a bit more successful in the Spell casting department than the last game, where they had only managed one successful spell.  This time we managed 5 successful spells: 3 Mind Control (two of which were negated by the target's Will roll), and 2 Heals (one each on Kodak and Cherowyn)

Back at their Inn, the team discovered their treasure contained 40 GC and a Staff of Casting: "Bind Demon", which Kodak sold for 300 GC.  The Illusionist immediately put out a call for a new Treasure Hunter to replace the deceased Jack, and a Marksman to help bolster his own warband's firepower.  Sadly, the Thug, Doc was released from service to make room for the new Marksman.
Happily, Sister Elessa is almost totally healed from the venomous Bone Dart she received last outing, so will be rejoining the band for the next trip.  Her sword was surely missed this time.
I'm already looking forward to the next adventure.
Posted by Chris Palmer at 4:26 PM 6 comments:

I always seemed to be short of treasure tokens when ever I would run my Frostgrave games, so I decided to make up some quick and easy ones using some odd weapons and shields from my bits box.  The intention was to represent a pile of abandoned ancient weapons that might hide a magic item or two of immense value.
I glued the selected pieces onto a couple 7/8" fender washer with some superglue. 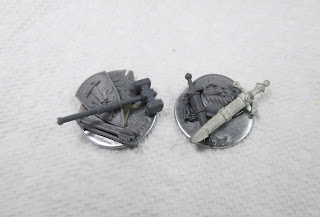 After the glue was dry, I sprayed the tokens with flat black spray paint, and then painted them with my regular craft acrylics.  When done, I gave them a shot of Testor's Dullcote. 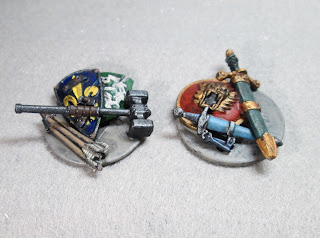 I'm pleased with how they came out, and they were certainly easy enough to make.
Posted by Chris Palmer at 8:17 AM 2 comments: