I recently competed a couple packs of Artizan's 28mm Late War Germans in winter outfits.  I plan on using these figures for the club's traditional New Year's Eve game day, and again for Cold Wars, in a GASLIGHT Pulp game called, "Santa Claus vs the Nazis."  Here is the game description as submitted to the Cold Wars PEL:
"Bent on obtaining fabled and occult objects from across the globe, Hitler sets his sights on the magical factories of Santa’s North Pole workshops. If these factories could be turned to munitions production for the Third Reich, nothing would be able stop the Nazi war machine. The Fuhrer dispatches a team of commandos to capture Santa’s workshops. Can Santa, his elves, and toys stop the invaders, or will evil prevail? Children under 14 with playing adult only."

You can click on any photo to see it larger.

The figures will of course also  be very useful for historical scenarios too.  And will probably see service in the Bulge, and on the Russian Front. 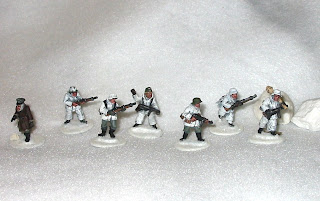 The figures were fun and easy to paint. I first sprayed them with gray Krylon primer, then drybrushed them with successively lighter shades of gray, working my way to white.  The baggy outfits have lots of great folds and creases to pick up the dry brushing. 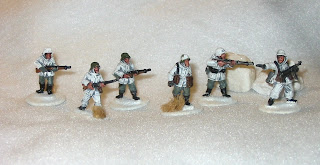 The bases were painted white, then flocked with a mix of Woodland Scenics snow flock, white sand, and some old mica glitter.  Some were then detailed with either twigs, or rope fibers to represent dead grasses, or small white stones. 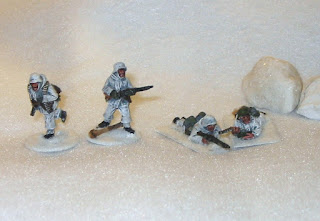 Posted by Chris Palmer at 10:06 AM No comments: