About a year ago I found this Barbie Rapunzel tower at a yard sale, and I bought it figuring I could make something from it some day.  Well, with my number of painted Reaper Bones fantasy figures growing, I've started thinking about using them in some games, and I thought it might a be a good time to actually do something with this Barbie tower.    I wish I could tell you more about it, other than it said, "Barbie Rapunzel" on it and was copyright in 2002.  It had a Barbie head in the tower that was on some sort of flip-up spring mechanism (which I had removed at some point soon after getting the toy). When I searched online for something similar, all I could find was the Barbie Enchanted Tower, which stands 20 inches tall.   This one is much smaller, coming in at only 8.5 inches tall; and where the big one opens up to create a play area, this one doesn't open. 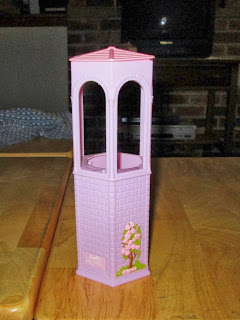 To begin with, I glued the tower to an old CD.  I then added a few pieces to complete the tower look.   To the front panel, to hide the barbie logo, I added a cardboard door, and a set of old plaster terrain stairs I had lying around.  Also, to the upper level, I added a plaster stonework circle, which I had.  I  added a small metal jump ring to the door to make a handle, and a small square of wood to the upper floor to make a trapdoor.
When all the glue had dried, I sprayed the whole thing with Krylon Matte Black with Fusion.  I then dry-brushed it with three different layers of grey, working from darkest to lightest.  My final step was to do a very light dry-brush with white on the corners and floral carvings. I then painted the door and the roof with blue. 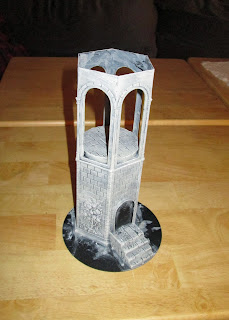 At first I was going to cover up the embossed rose bushes with clump foliage glued on, but I actually ended up liking the carved nature of them (one each side of the door), and I thought they helped the Elven appearance of the tower.
I did however, glue some foliage on the back of the tower to hide the Mattel logo and copyright information. 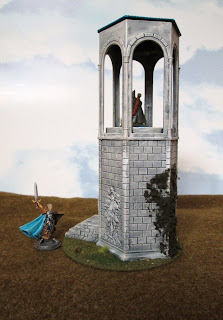 All and all I'm very pleased with how this came out.  It was fun little project, and will make a great addition to a scenario.
Posted by Chris Palmer at 1:04 PM 3 comments:

As some of you may have read here previously, (See: Look, Sarge, it's Not Quite the Seven Years War ) I've been working on recreating my 40mm North Polenburg Imagi-Nation units, that we use with the old-school rules "Charge!", into 10mm units for use with our "Look, Sarge, No Charts" system of rules. One of the parts of this project that I looked forward to, was the opportunity, due to the size and low cost of 10mm figures, to create a large portion of the (if not the whole) North Polenburg Army.  This would be very hard, if not impossible, to do in 40mm due to the size of the figures and units.
Well, I'm happy to announce that I have finished painting and basing the complete North Polenburg 1st Division, including an attached brigade of heavy cavalry.
The Division is commanded by General Schlegel, and consists of two brigades, each of three regiments,  and two attached batteries of artillery.
1st Brigade- General Palmer commanding: 1st "Queen Jennifer" Regt., 2nd "Hawks" Regt., 3rd Regt.
2nd Brigade- General Bailey commanding: 4th "Prince Edgar" Regt., 5th "Prince Edward" Regt, 6th Regt.
(Those officers and units shown in italics are those that also exist in my 40mm version.) 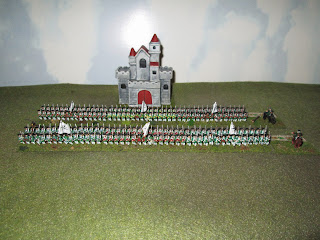 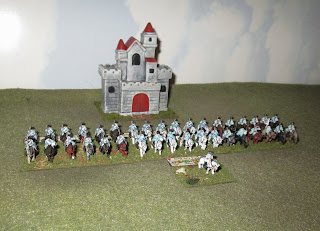 I'm really pleased with how these forces have turned out, and I'm looking forward to continuing to grow this project.  I think my next move will be to start building an opposing force, from the neighboring country of South Polenburg.