The HAWKs Travel to Nashcon

This past weekend, a group of five of the HAWKs: Buck Surdu, Geoff Graff,  Greg Priebe, Don Hogge, and I, headed down to Nashcon in Franklin, TN.  We rented a mini van to carry us, our figures, and the terrain we would need for 6 games.  It was a bit of a challenge squeezing everything into the vehicle, but we managed it somehow.  Part of the plan was that we would re-use the same two sets of terrain for the 5 different games.  Thursday afternoon we headed out and arrived at the con Friday morning.

The HAWKs had a great time as always at Nashcon.  It is a really well run show with a lot of great folks attending.  We look forward to our next trip back to Tennessee!
Posted by Chris Palmer at 8:51 AM No comments:

We are slowly gearing up to begin work on our latest rulebook in the "Look, Sarge, No Charts" series of rules.  This will be geared towards Near Future and Science Fiction battles.   Therefore, I have been busily working on assembling some forces to use during playtesting; and have just completed my first full tank battalion.
I used tanks from the Scourge faction from Hawk Wargames Dropzone Commander range.  Since I didn't see needing a ton of Anti-Aircraft vehicles, which came with the Scourge Starter Sets I purchased,  I converted them to be HQ tanks for each company and the battalion.  I chose the Scourge becuase I like hover tanks, and I felt they had a cool alien look about them.
I organized the battalion in a basic 3 by 3 arrangement of three companies with three platoons each.   I will probably eventually create an actual AA platoon stand to attach to the Battalion HQ once we start working on the aircraft support rules. 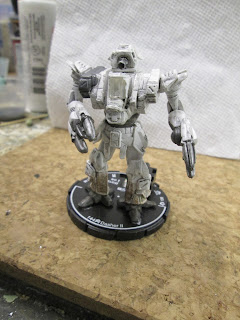 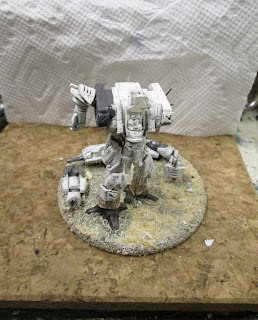 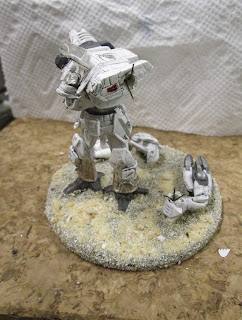 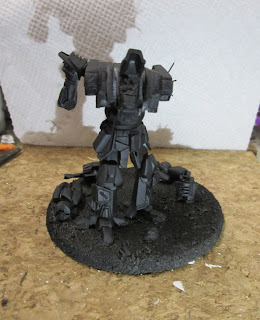 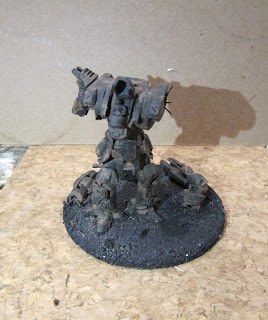 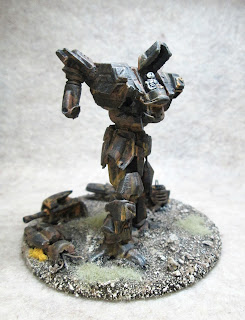 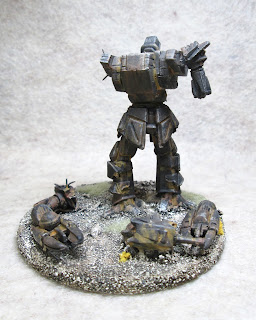 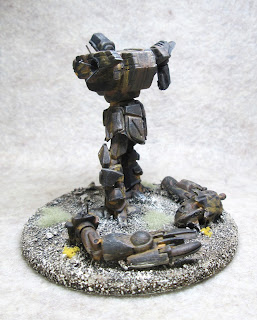 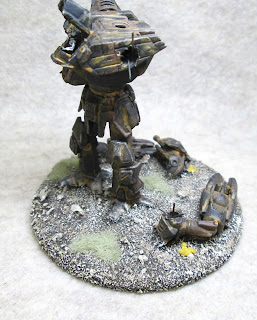 
Ozymandias
by Shelley
I met a traveller from an antique land
Who said: "Two vast and trunkless legs of stone
Stand in the desert. Near them, on the sand,
Half sunk, a shattered visage lies, whose frown,
And wrinkled lip, and sneer of cold command,
Tell that its sculptor well those passions read
Which yet survive, stamped on these lifeless things,
The hand that mocked them and the heart that fed:
And on the pedestal these words appear:
'My name is Ozymandias, king of kings:
Look on my works, ye Mighty, and despair!'
Nothing beside remains. Round the decay
Of that colossal wreck, boundless and bare
The lone and level sands stretch far away
Posted by Chris Palmer at 3:10 PM 4 comments:

To read an account of the game from the Necromancer's view, please see: Tower of the Archmage

To read an account of the game from the Druid's view, please see: Wargaming Notes
Posted by Chris Palmer at 9:21 PM 4 comments:

Saturday I helped my friend Don run a Frostgrave demo game at the local game store.  We got two walk-up players, and one of our regular Campaign Game players, Buck, came to play as a make -up game since he will miss our next campaign session. 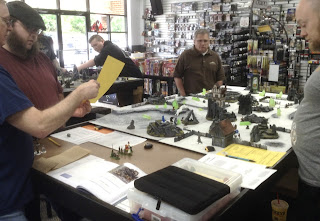 Since we had three players, I jumped in as a fourth to balance the table.  I took a Thaumturge warband to try something different.  As usual my spell casting rolls were miserable.  I did have fun however casting Shield (+2 armor) which turned my dwarf templar into a little tank. :), and then also used "Blinding Light" a lot (reduces target's fight to 0, and move to 1).
I experimented with a tactic of using Blinding Light on my neighbor's soldiers who were heading to the table edge with treasure, and then sent my templar after them.  It would have worked, but the wizard, a necromancer, kept raising zombies in my path to slow me down!
All in all, a great time was had by all.  I only got 2 treasures, but had a lot of fun. And at least one of the new guys bought a copy of the rules.
Posted by Chris Palmer at 8:49 AM No comments:

This past Saturday, the HAWKs attended the HAR-CON gaming convention put on by the game club at the local Harford Community College.  This con is a mixed gaming con, with video games,  role-playing games, card games, board games, and miniatures games.
The HAWKs presented three games: a large French & Indian War extravaganza using Muskets & Tomahawks rules, a Chaos Wars mass-combat fantasy game, and a Mobile Suit Gundam game.  While the Chaos Wars and Gundam games were somewhat standard, with set start times and number of players; the club designed the big French & Indian War game a little differently.  The game was set-up on a large "T" shaped table, and featured two forts, two villages,, and an Indian settlement; and about a dozen commands of troops ready for any gamers to walk up and play with.  The idea was that the game would run all convention, and interested gamers could come to the table at any time, be assigned a command and a mission, and enter into the game with one of the HAWKs to help tutor them in the rules, and then leave whenever they wanted..
This plan worked out really well, with convention-goers coming and going from the battle the whole day.  It was a lot of fun for the club and for those who came and took part.


I was fortunate to have the opportunity to play in a couple games at the con.  First I helped fill an empty seat at Rob's Chaos Wars game, which I had never played before.  It was a fun set of rules, and Rob's figures and table are always beautiful and a treat to play with.
After lunch, I was one of the panelists, along with David "Zeb" Cook and Buck Surdu, in a Game Designer's  Q&A session.  The event was a lot of fun, and we were all pleasantly surprised that around 25 folks turned out to listen to us, and ask some interesting questions about our experiences with designing games.
Later, I joined in with a group of the other fellows from the HAWKs on the patio outside the school's student center to play a game called Johann Sebastian Joust, hosted by Markus Mabson. The game is a non-graphics, digital outdoor game in which each player holds a motion-sensitive hand controller and attempts to not move the controller too much, or it will internally vibrate and then lock the player out of the game.  The game master plays music, fast or slow, from a base station that the controller is linked to, and the faster the music is the less sensitive the hand controller is, and the slower the music is the more sensitive the hand controller is.  As the music plays, each player tries to move around, not disturbing the motion-sensitive hand controller in one of their hands, while at the same time trying to use their other hand to knock the arm of the other players to trigger their motion sensitive hand controller.  Much hilarity ensued!
Lastly, I played in a card game called "Gloom", run by Emeril Getscher.   In the game you play a dismal and eccentric Victorian family, and each player attempts to be the first to kill off their family in the most depressing ways.  The game was fun and had some interesting tactics to work through.
I had a great time at the HAR-CON as did the rest of the HAWKs.  It is a great little one-day  gaming event, and we look forward to returning next year.

Posted by Chris Palmer at 11:16 AM No comments: