I've slowly been putting together the pieces to run a game based very loosely on J. R. R. Tolkien's, "The Father Christmas Letters." This book is a compilation of letters Tolkien wrote to his children at Christmastime from 1920 to 1939. Several of these letters describe the problems Father Christmas, his friend Polar Bear, and the Elven workers had in dealing with raiding Goblins. The Goblins would try to steal the toys from the North Pole. In my version Father Christmas will get help from some 1960's TV Christmas Special characters also!
I'm using 28mm figures and the rules will be G.A.S.L.I.G.H.T. For the Goblins I'm going to use Games Workshop Goblins. For Father Christmas' side I'm using figures from several sources. I'm not finished painting figures yet, but I thought I'd show you what I have so far. I'm going to be running the scenario New Years Eve, so I'm frantically painting the rest. 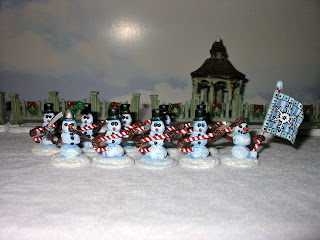 The Snowman Squad. The figures are from Team Frog Studios. 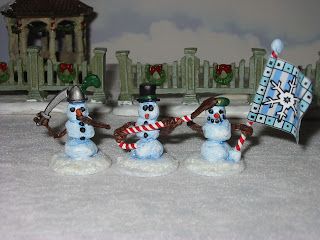 The Snowman Command. The leader figures is converted from a casualty figure with the addition of a sword and a helmet and the hole through his midsection filled with putty 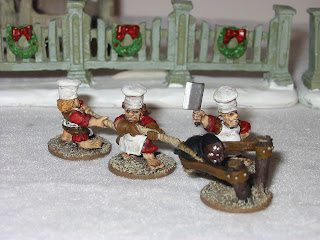 The North Pole Cooks Catapult. Filled with boiling hot chocolate and marshmallows! This will teach those gobos a lesson or two! It started life as an old Games Workshop Halfling catapult 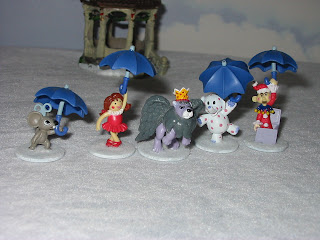 King Moonracers Misfits. An elite paratrooper squad. These are plastic mini-ornaments sold in a set. The eye-ring at the top of the umbrellas for hanging on the tree has been removed.. The Teddy Bear Battalion. The figures are from Eureka Miniatures. 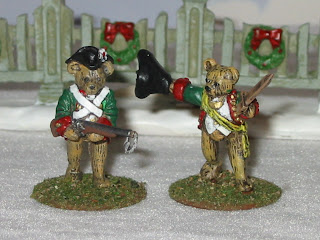 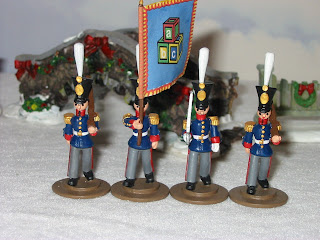 The beginnings of the Toy-Soldier Guard. This will be a unit of 10 figures. These figures are from Eureka
. 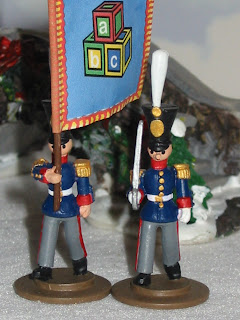 Close-up of the Toy Soldier Command.
Posted by Chris Palmer at 5:41 PM 1 comment: