Last Saturday some of us from the HAWKS went up to Warhorse Farm in PA to help fellow HAWK, Sam Fuson, celebrate a milestone birthday in style; with a day of gaming hosted by his wife, Kathy, and himself.   Fifteen of Sam's friends gathered for the event. In the morning we ran three games, A Mexican-American War game using modified "Muskets and Tomahawks" rules, a Civil War game using "A Union So Tested" rules, and a Victorian Science Fiction ACW game using GASLIGHT rules (Which I ran).

Around midday, when the morning games ended, we took a break to feast on fried chicken coleslaw, and potato salad.  Then we all enjoyed some of Sam's two birthday cakes. :)  With full bellies, we began the afternoon's gaming session.  There were two games, a WWII Eastern Front battle using "Look, Sarge, No Charts:WWII" rules, and a Western Front battle, using "GAMER" rules.

We all had a blast with good friends, good games, and good food.  Popular opinion was that this should become and annual event. :)
Posted by Chris Palmer at 9:42 AM 2 comments:

This week I completed the commander-in-chief figure for my Lizardman Army: The Mage-King of the Lizardmen.  For the base of it I used the Games Workshop Lizardman "Tetto'eko" figure, which I was fortunate enough  to get a good deal on from a friend at last year's Barrage convention Flea Market. 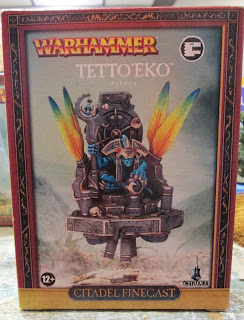 To make the conversion from 28mm to 10mm I did a couple modification.  First, I cut the tall feathers off of each of the side partitions to reduce the overall height appearance. And then I simply didn't add the pair of pillars that are suppose to go on the deck, and the three that are mounted underneath. After I assembled the throne, I test fit different arrangements of Pendraken 10mm Lizardmen until I found a pleasing composition.  It was then just a matter of painting the throne and its occupants. 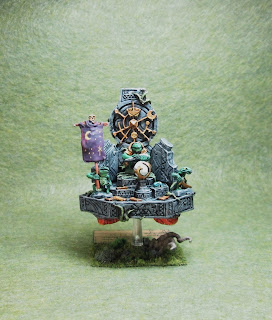 I am pleased with how it came out.  I think the original model is just scale-neutral enough to make a convincing king-sized 10mm throne.
Posted by Chris Palmer at 11:35 AM 6 comments:

I just wanted to let folks know that the Reaper Bones 3 Kickstarter has just over 3 more days to go.  It's a great opportunity to get a lot of minis for a really reasonable price.  The Core Set has well over 100 minis, and there are a lot of great add-on sets as well.   If you haven't done so already check it out: Bones 3 Kickstarter

Posted by Chris Palmer at 8:58 AM No comments:

This past week, I completed a warband of 10mm Mind Eaters.  Recently, I painted up a pair of  Reaper 25mm Mind Eaters and mounted them  on a base for Bear Yourselves Valiantly to represent giant Mind Eaters.  You can see that post here. 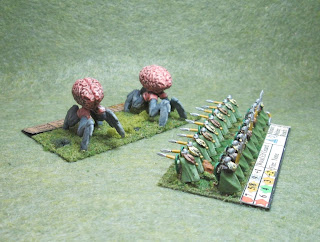 While working on these figures, I was struck by their passing resemblance to the adrenal/toxin sacs that come with various GW Tyranid sets; and I got the idea that some of these bits might make good in-scale 10mm Mind Eaters.  So I ordered a set of them off of Ebay, and painted them up.  I think they turned out pretty good. 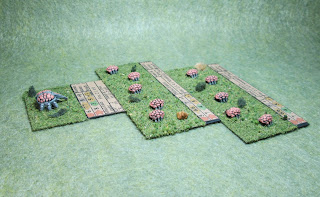 I statted them up so they have ranged attacks that do Morale results only, and gave them a modifier that penalizes any troops trying to close with them or stand against their charges.
Posted by Chris Palmer at 8:19 AM 4 comments: