I'm happy to announce that this blog, "One More Gaming Project," has surpassed 50,000 page hits this week.  Thanks to all of those who have stopped by and given us a look.
Posted by Chris Palmer at 10:44 AM 2 comments:

GASLIGHT at Historicon 2002: Ten Years Ago This Month

I thought with Historicon 2012 behind us now, it might be fun to travel back in time to the early days of GASLIGHT as it was ten years ago at Historicon 2002. The rules had just been published in 2000, and were already starting to generate a small group of fans.

Saturday evening, before my game started in the HAWKs room, I took a moment to walk around the room and photograph some of the games the the other club members were running in the room. I also took some shots during my game.

Posted by Chris Palmer at 5:01 PM No comments:

Friday night, after my game was done, I took a minute to walk around the HAWKs room and take some photos of some of the other HAWKs games that were being run in the room.


Posted by Chris Palmer at 4:21 PM No comments:

Friday afternoon at Historicon Buck Surdu ran our "Armies for Kids" project game.  This game was designed for 4 kids, and each kid who participated were to receive a 15mm French and Prussian Seven Years War army as well as a box of terrain to keep and take home with them.
Even though this was spelled out in the convention program, we only got two kids to come out and take part. Sometimes its just hard to give stuff away I guess. Both kids had a blast playing the scenario, and were thrilled with new their armies and terrain.

For more information on this year's project see:
http://theminiaturespage.com/boards/msg.mv?id=274668

Posted by Chris Palmer at 8:48 PM No comments:

Saturday morning, Buck and I ran our big 21 player Mars by GASLIGHT Extravaganza.   This was a mash-up game of many different Mars backgrounds, and featured Green Martians, Red Martians, Cephalopod Martians, Rockmen of Mars, and even Rooman of Mars, plus a variety of Earthmen forces, including American, Russian, German, British, and Masked Minions of unknown origin.  We had a full compliment of players around our big 20 ft table, which was decked out with an assortment of terrain from both our collections.
Everyone had their own objective. These were such things as retrieving an ancient artifact, rescuing Dejah Thoris, securing a crate of medicine, capture one of each type of Martian, or obtaining Cephalopod tripod technology, for example.

The figures used were an assortment of Bronze Age, Parroom Station, Tin Man, Pulp Figures, Hinterland, Ironclad, and a number of other manufacturers. Many of the vehicles were scratch built.

In the end, several of the players achieved their objectives, and the players all seemed to enjoy the game. We as the GM's had a blast setting it up and running it. And we appreciated those folks who hung around and helped us clean up.

Posted by Chris Palmer at 6:06 PM No comments:

I arrived at Historicon Friday afternoon, and soon after getting there, began setting up my Friday evening GASLIGHT game, "Rescue on Venus".  This was a follow-up scenario to my Cold Wars "Lost Legion of Venus" game and featured an attempt by French Foreign Legion to rescue Victoria Hawkes from the grips of the evil Lizardmen.  Also, present for the first time in this game were my Venusian Amazons. They were trying to free their princess who was also a captive of the Lizardmen.
The game was a lot of fun, but unknown to me the Lizardmen and Venusian players had made a deal for the Venusians to not attack them and in exchange the Lizardmen would free their captive princess.  I did not realize this plan was in action until the game was several turns in, or I would of have allowed it, because it upset the play balance of the scenario, and the game ended with a  Lizardman victory.  In the future, I will have to add the "no alliances" rule to the scenario briefing.  Nonetheless everyone had a great time, and I look forward to running the game again at Cold Wars.

One of the things Buck Surdu and I brought this year was a new vinyl GASLIGHT banner Greg Priebe designed for us.  We're really pleased with how this turned out and look forward to displaying it over our games at future conventions.  We also hope to have a T-shirt and poster version available soon in our Zazzle shop.

HAWKs Complete Preparations for the 2012 Armies for Kids Project 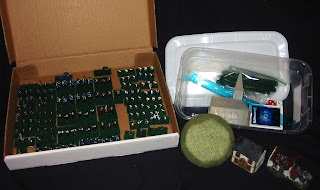 The HAWKs (Harford Area Weekly Kriegspielers), have completed the final assembly of this year's Armies for Kids project. The purpose of the club's annual project is to give away free armies to kids, in an attempt to help grow the hobby. The initial project was launched last year, after the club received a sizable donation of unpainted 25mm American War of Independence figures from the Wally Simon estate, with the simple request that the club see the figures got into the hands of kids. 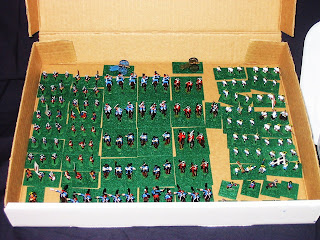 The HAWKs then held several painting bees to paint the hundreds of donated figures. The results of last years project was the presentation of painted opposing armies, as well as a gift bag of terrain and playing aids, to 8 children who participated in specially designated kids games at Historicon '11.
This year, the club worked on a Seven Years War project based on the generous donation of 15mm figures from Robert Piepenbrink, as well as the donations of additional SYW figures from Erik Engling, and Ed Mohrmann. The club has been aided this year by some financial donations from folks who generously gave the club money at last year's Historicon, as well as the painting support of John Spiess, who painted two of the giveaway armies for us this year. The rest of the figures were painted by HAWKs club members in a series of group painting sessions held throughout the year. 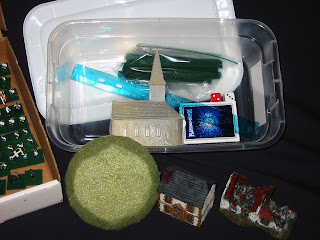 The HAWKs have now completed the painting and basing of all the armies, and assembled the boxes of terrain and playing aids that the kids will receive. Each participant in the event listed below will receive a painted French and a Prussian Army, as well as some cards, dice, a ruler, buildings, a hill some hedges and other terrain pieces.

This is the event which will be held Friday night at the upcoming Historicon convention:

F-545 HAWKS Army Giveaway for Kids
Seven Years War: 6 PM: Length: 2: Hosted by: Buck Surdu: Scale: 15mm:
Rules: Milk and Cookies: No. of Players: 4.
In this second year of a multi-year outreach effort, the HAWKs
are sponsoring a game to interest children in the hobby.
Several gamers have donated figures to the HAWKs with
the understanding that we will get them into the hands of
kids. All four children who participate in this event will get
a small, painted French and Prussian army to take home.

For additional information contact me at CNJPalmer@aol.com
For details on last year's project see: http://bucksurdu.com/blog/?p=541
Posted by Chris Palmer at 4:36 PM No comments: