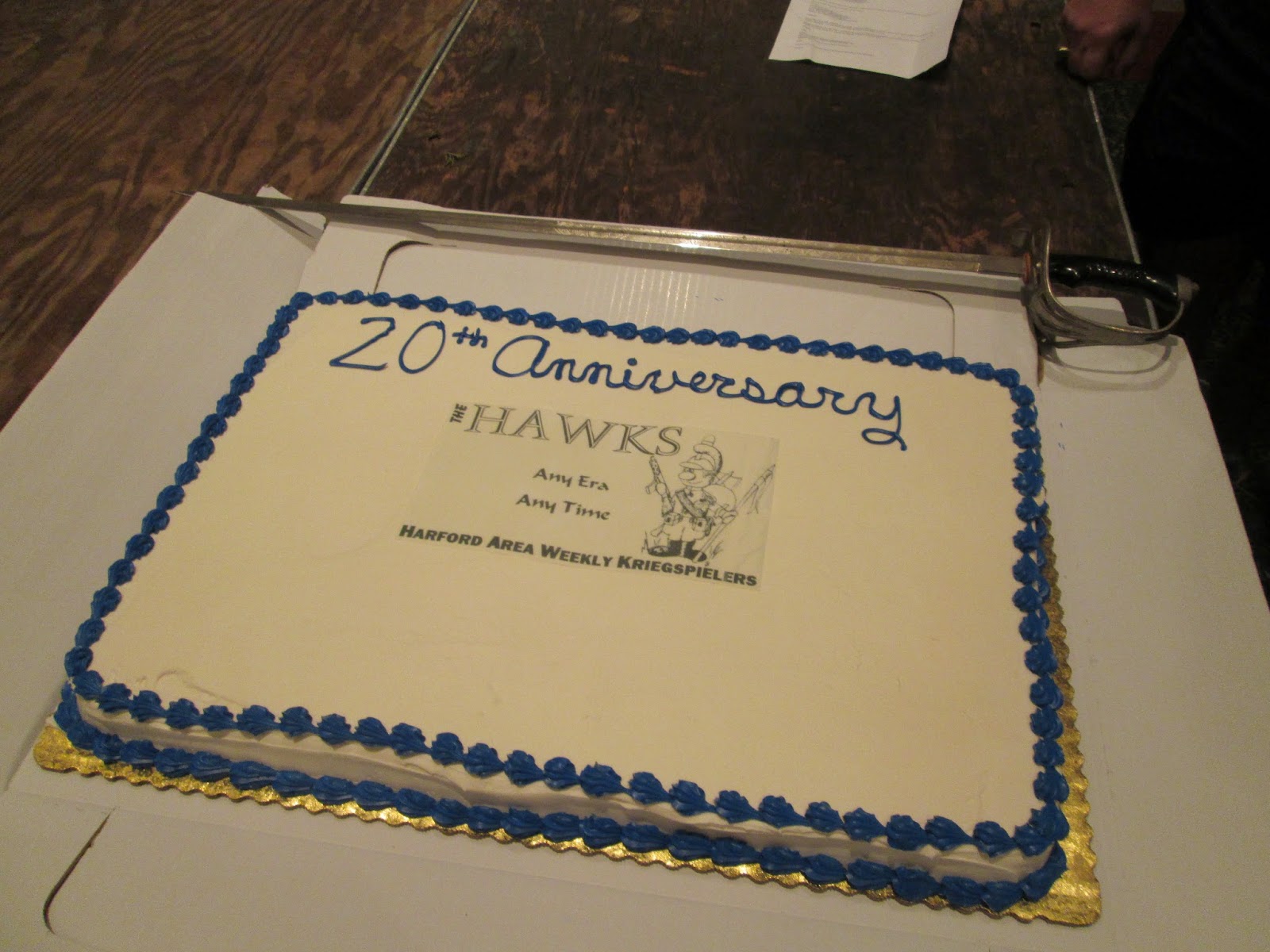 A couple years ago at one of the HMGS cons,  to celebrate the 1000 convention game that the HAWKs had run, we ran a game called "The HAWKs 1000" which was a race game based on the GASLIGHT and Future Race rules sets.  The race had four courses: boats, dog sleds, zeppelins, and cars; and players cycled through each race collecting points. At the end, whoever had the most points was declared the winner.
We decided to bring the game back for this year's Historicon as part of the HAWKs 20th Anniversary celebration.  This years race had only three courses: dog sleds and cars like before, and this year we added Martian hover-skiffs.  I was selected to run the hover-skiff leg of the race, Done Hogge ran the car race, and Buck Surdu ran the dogsled race.
We got twelve players for our game, which we broke down into two teams of 6, and each team cycled through each of the race courses.  Each vehicle usually had 2 occupants, a driver and an assistant (who was usually armed), and players were given a random assortment of "dirty trick" cards that they could play on themselves or other racers. In my race, besides just trying to finish first, there were also a couple side objective that the players could hope to achieve; the first of these was to rescue a  lost explorer who was located in a far corner of the course, and the second was to rescue a Martian princess who was tied to a monolith in another corner of the course.
My Martian hover-skiff race got off to  bang, when on the second turn a participant played a "dirty trick" card on another that involved a pair of rogue Martian snipers with radium rifles popping up on the course and taking potshots at the racer.  One shot went wild (actually hitting another racer!) but the other shot hit the robot driver of the targeted skiff.  The robot needed to make a Save roll, and rolled a 20, which in GASLIGHT, means something BAD happened. So, as GM I ruled that parts of the destroyed robot had fallen into the engine, and the player needed to roll a Save for the vehicle or it would take damage.  He succeeded in rolling a second 20, which on the damage table indicated that the vehicle exploded and fell to the ground.   I let him make a Save for his assistant figure, which he did, and so the assistant set off to finish the race on foot.
The highlight of the second game was when a player had his skiff crash with only the robot driver survive he tired to use the robot to steal the skiff of another player (who had parked it to rescue the lost explorer) and so I made him roll a Save to see if his robot's programming was compatible with the other skiff's.  He rolled a 20 as well, and so I ruled that in it's attempt to diagnose the skiffs programming, defensive software in the skiff had short circuited the robot.
Both runnings of the race were a hoot to GM, and a great group of gamers made for a terrific night. It was a great way for me to wrap up Historicon 2014.

Saturday morning at Historicon I ran my "Warring Roses in the Mist game, which featured the Battle of Barnet fought 14 April 1471, using "Bear Yourselves Valiantly" rules and 10mm figures.  In the battle, King Edward IV arrayed his Yorkist army to fight against he Earl of Warwick and his Lancastrian army on a foggy morning; so foggy in fact that the two armies lined up offset, so both had dangerously threatened flanks.
One of the main features of the battle, other than the visibility limiting mist, was several hedges that cut through between the two armies, hindering their movement.   In the game,  the Lancastirans were able to advance their longbowmen to these hedges providing them some cover as the Yorkist army also moved their archers forward.
The archery duel commenced and after a couple turns the Lancastrian army had received the worst of it, loosing the achery duel in front of all three of their commands (Exeter on the left, Warwick in the center, and Oxford on the right)  As their remaining Lancastrian archers fell back the Yorkist archers poured fire into the Lancastrian foot soldiers as they now tried to move up.
The Duke of Exeter on the Lancastrian left, who was badly outflanked by the Duke of Gloucester across from him, quickly found himself in a bad position and his lines began to get badly decimated.  Exeter was slowly pushed back and Warwick found his troops in the center now threatened.
Meanwhile on the Lancastrian right, the Earl of Oxford, who outflanked his opposite, Lord Hastings, despite having his archers mauled was able to advance across the hedgerow and held his own for a while, but he was unable to maintain any momentum in his attack, and he too found himself slowly pushed back.
Once the writing was on the wall, Warwick conceded, and the game was called as a Yorkist victory.  All the players said they had a great time, and several said they were eagerly looking forward the the rules being published early this Fall.  As a GM I enjoyed running the game for a super group of players.
Posted by Chris Palmer at 4:17 PM 2 comments:

Email ThisBlogThis!Share to TwitterShare to FacebookShare to Pinterest
Labels: BYV, Historicon, War of the Roses

This year's Armies-For-Kids project was successfully concluded at last weekend's Historicon convention with the awarding of pairs of opposing, painted,  28mm Napoleonic Amries, terrain and other gaming aids to 6 lucky kids after completion of a specially designated kids' game on Saturday at the con, GM'd be HAWKs member Eric Schlegel.  We also handed out two complete pairs of 15mm Seven Years War Armies and terrain, left over from our 2012 Armies for Kids effort,  to two lucky kids who took part in another kids' game we ran during the con.
This year's armies were provided through generous donations from Jay Hadley, Ed Mohrmann, and the Nashcon staff.   The terrain we gave the kids was provided, and constructed, by Chris Johnson.
Next year we are planning to be putting together 40mm ACW skirmish forces for our Armies-For-Kids project, based on a generous donation of figures from Maynard Creel.  So, if anyone has any 40mm ACW figures, or suitable terrain they'd like to donate, please contact me at cnjpalmer(at)aol(dot)com.

Posted by Chris Palmer at 10:46 AM No comments:

Jennifer and I arrived at Historicon Friday afternoon, and after checking into our hotel, we headed over to the Expo center to register for the con, visit the HAWKs club room, and unload our gaming stuff.  Luckily, the table for my evening game, the Battle of Five Armies using "Bear Yourselves Valiantly" rules,  was open; so I was able to enjoy a leisurely set up, and then break for dinner in plenty of time to be all ready for the start time at 7:00 PM.
The game got off to a good start, and I was lucky to have a couple of fellows who had played in James 'Tank' Nickle's Rome vs Carthage game on Thursday using the same rules, so they were familiar with the game mechanics and were able to help the other players.
The battle, using 10mm figures, is from the book "The Hobbit", and features armies of Men, Elves and Dwarves, facing off against forces of Goblins and Wargs for control of the Lonely Mountain and the wealth it contains.
Though the allied armies initially found themselves hard pressed, the Goblins found the dice were not their friend and they had trouble successfully making a number of key dice rolls that eventually led to their defeat.  First one, then three of the Goblin forces retreated, and at that point we called it a night.
All the players said they had a great time, though as a GM it's always hard to see one side's luck turn south.
At the same time, Buck Surdu and Dave Wood were running a 10mm Napoleonic battle, the Battle of Mincio River 8 February 1814, using "Fate of Battle" rules.
Also being run Friday night was Geoff Graff's 6mm Russian Front WWII game using "Look, Sarge, No Charts: WWII" rules.
On another table, Bill Acheson was also running a WWII  game, set during D-Day,  featuring much larger 54mm figures.  He was using the under-development "G.A.M.E.R." rules written by Buck Surdu, an featuring an innovative card activation and combat system.
And in the middle of the figure scale, Don Hogge was doing WWII with 25mm figures and "Battleground WWII" rules in his Panzer Lehr Counterattack game.