Last Friday night, we were short a game for our club's meeting, so I volunteered on Thursday to run a scenario using our under-development Fantasy, Ancients & Medieval  mass combat rules, "Bear Yourselves Valiantly".  So, to come up with a quick scenario for the game, I relied on an old idea that we had had success with in the past: using a scenario from one period for a game set in another.  And in this case, using a historic scenario for a fantasy battle.  So I grabbed my copy of Skirmish Campaigns' "Russia '41 - Into the Ukraine", and leafed through it.  I decided on the "Supply Line" scenario, which I had run before in it's intended WWII version, (though at a higher level, where bases equaled platoons) so I knew I had all the necessary terrain.   This scenario features a convoy of German trucks that needs to travel down a road and exit the table while a force of Russians is pressing in to try and destroy them.
So, for my version, I decided I would replace the German convoy of trucks with some Elven treasure wagons and refugees, fleeing some catastrophe that has happened far off table.  They would be defended by Elven forces.  The Goblins would take the place of the Russians, entering on the table and trying to capture the treasure and refugees. Once again, I was going to raise the level of the troops represented from the original Skirmish Campaigns scenario (which was written for individual figures), to one where each base equals several hundred men. (In "Bear Yourselves Valiantly", each base of infantry equals roughly 400-500 men, and each base of cavalry equals 200-250 mounted troops)  In fact I used the OOB from the scenario only as a loose guide, and relied more on what figures I had at hand. The map, victory conditions, and deployment I kept the same.
The forces I selected were organized like this:

The game begins with Elven Force 1 deployed on the table about 24" in on the western half of the table, and Goblin Force 1 set up about 30" in on the western half.  The Elves would get their Force 2 on subsequent turns, entering about a foot in along the northern (long) edge of the table; the Spearmen entering on turn 2, the Cavalry on turn 3, and the Refugees and Wagons would enter on turn 4.  The remainder of the Goblin forces would enter from the western half of the southern (long) table edge on the first turn.
There were a number of main features on the 6'x 7.5' table.  The first is the road which runs straight about a foot from the edge along the northern (long) edge of the table, with a "Y" about half way along.   There is also a large marsh which roughly splits the table along the southern (long) edge; and from this marsh runs a mostly dry stream bed that angles along and exits off  the western (short) table edge, and is treated as heavy rough for movement across it.  South of this dry bed is a hill.  At the "Y" in the road is a small Elven town, and between the two branches of the road are several fields which count as light rough for movement.
To win, the Elves need to exit the wagons and refugees off the eastern end of the straight road. The Goblins need to prevent this.
Due to an unexpected shortage of players at the meeting, I took over command of the Elven Force 1, with Jamie Davis commanding Elven Force 2.  Across the table, Chris Davis took Goblin Force 1, and Eric Schlegel took command of Goblin Force 2.  Both Jamie and Chris were new to the rules.  Eric had played before.
I set up my spearmen in line as close to the center of the length of the road as I could, with my archers stationed behind my spear line on my left and the knights and mounted archers behind and to my right.  The Wargs set up across from me in two columns, and immediately charged forward.

As the dry stream bed slowed the Wargs down, I thought I had time to try and maneuver my archers forward on the left, and my wizard moved up to offer support on the right. My cavalry were slow to activate, so were not at first able to move forward and throw themselves out into a line.
The first column of Wargs bypassed my solid line of spears, and instead headed straight for the weaker archers who where trying to maneuver into a line on my left.  My wizard cast a spell on one of the Warg stands that caused it to immediately take 2 morale checks , with the result being the Wargs ended up going to Pinned condition. The rest of the Wargs got to the archers quickly, and were able to badly maul one unit, before a hail of Elven arrows drove them back, causing morale checks which they subsequently failed, and they routed back to the safety of the stream bed.
Meanwhile, the unit of bats that was flying with the Wargs, made a beeline for my Wizard.  They exchanged melee and eventually my Wizard became bat-chow, but not before doing two hits on the bats (Full stands take 3 hits before being removed, small stands like Leaders, Heroes, and Wizards only take 2).  My mounted archers were subsequently able to eliminate the bats.
While this was going on, the Goblin infantry was slowly slogging across the stream bed, and moving up on the Wargs' right.  On the Elven side, the reinforcements started to reach the battle, with the line of Eleven spears from Jamie's force moving up on my right.  His knights, he send down the road to our left, as the Opportunistic Evil guys were making good headway up to cut the road.
As the second column of Wargs moved up to cross the dry stream bed, they were met with charges from my cavalry, and Jamie's spears, and a viscous melee developed in and around the stream bed.  The elves badly hurt the Wargs, but did not eliminate them.  Our trouble now was we, especially my cavalry, had taken several hits and were badly weakened.  When the Wargs finally routed back to the cover of the hill, both my cavalry stands had two hits on them, so teetered on the edge of being eliminated.
By this time the wagons and refugees had entered the table and were making their way down the road.
Meanwhile on our left flank, the Giants had made it to the road to block it, just as Jamie's knights got there and charged forward.  The Giants rolled a "Fire Twice" on their "To Stand" dice roll, and so were able to launch a hail of boulders at the knights as they closed, doing two hits on them.  The remaining knights, however, joined by their brigade leader, on the Giants' flank, were in turn able to hit the Giants back twice.

The Goblin infantry had now moved up and were trying their best to move around our flank just out of short range bow fire (long range fire only does morale checks, not kills). One clan broke and ran for cover of the creek bed, but the other still pressed on. The Goblin Shaman cast a spell in front of one of the units of Elven archers which caused a magic wall of giant thorn bushes to grow to the sky, effectively blocking the fire from that unit.
About this point in the battle we had to end due to the lateness of the hour.  The Elven wagons and refugees had got about half way across the table.  While the Elves' infantry was still in relatively good shape our cavalry had been badly mauled, and were just a hit or two from disintegrating.  The Wargs however, while they had taken hits and routed, still had enough good stands left that they would surely be able to cause a serious threat to the wagons and refugees when they recovered.  Without our cavalry, the remaining infantry would be too slow to respond to any penetration through our lines or around our flanks by the fast Wargs.  I therefore called the game a Goblin victory.
Both sides had a good time, and there were a number of desperate melees that happened in the game that kept things exciting and the balance of the outcome up in the air until the end.
Posted by Chris Palmer at 4:55 PM No comments:

A 10mm Elf Building Made From a Tropicana Orange Juice Lid

Ok, to begin with, let me say I am not a big orange juice drinker. So, it came as a surprise to me when I was browsing the drink aisle at a convenience store while travelling over the holidays, that Tropicana had these cool arched design lids on their drinks. When I saw it, it immediately said Elvish architecture to me; and was a perfect size to go with my 10mm Fantasy minis.  So, I bought one to bring home and work on, and I finally completed it this past week. 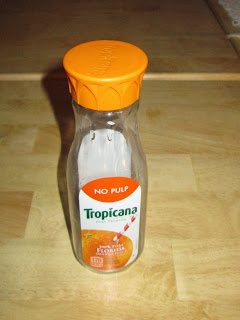 The main problem I saw with the lid was that it has the name "Tropicana" embossed on the top.   So, to hide it, I glued a large 1.5 inch plastic base over it. A 2" one may have been better, as the size I used didn't quite fully cover the embossing, but I didn't have a spare 2" one on hand.  And the 1.5 inch gives a nice stepped look. 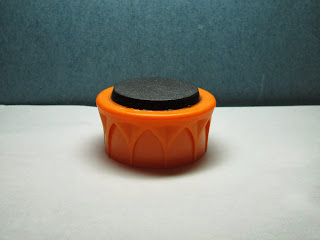 I first sprayed it with Krylon Flat Black with Fusion to act as a primer. 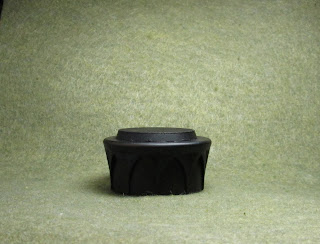 And then I gave it a spray with Krylon Flat White. 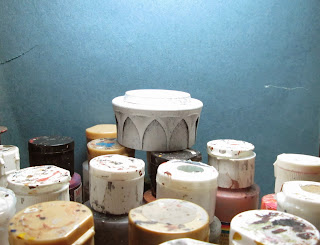 I then painted it white again, with regular bottle acrylic paint, to help hide the black undercoat, and added some blue trim.  Lastly I painted on a door and added some paper windows I printed out with the computer.

The bottle and lid I got were the 12 oz size.  I since noticed in the grocery store that a large lid come on their large juice bottles.  While it is slightly larger in diameter, it is actually about s millimeter shorter in height.  It might make a nice large version of the building, or a neat two story structure. 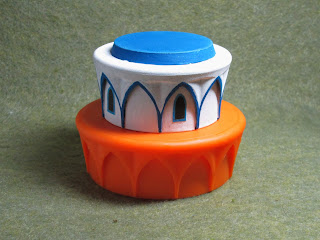 The HAWKs (Harford Area Weekly Kriegspielers)  have launched a new Tumbler site, where folks can go to get a one stop source for all the member's blogs and other club announcements.  The site will feature game reports, painting tutorials, scratchbuilding ideas, convention information, etc.   You can find it at:
http://www.hawks-club.org/ 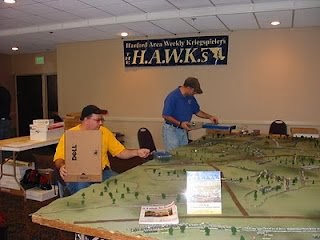