This past Saturday, 8.24.13, Buck Surdu and his daughter Sammy, Dave Wood, and myself made the trip up to our friend Sam Fuson's Warhorse Farm in Gettysburg, PA to run some GASLIGHT and "Look, Sarge, No Charts" games for him and his friends.  We began the day with my "Victoria Hawkes Saves the Queen" GASLIGHT game, and Buck running a "Battle of LaRothier" Napoleonic scenario using Fate of Battle rules.
This is the sixth time I've run my V.H. Saves the Queen scenario, and the players as usual had a great time.  The game pits an allied force of U.S. Marines, British Guards, and Cowboys, against a group of Prussians and their mercenary gunslingers. The Prussians have kidnapped the Queen of England while she was on a goodwill trip to the U.S., and have whisked Her Majesty away to a deserted Texas town where they await a zeppelin flying in from Mexico to transport the Queen out of the country.  The 'Good Guys' have 12 turns to rescue the Queen before the zeppelin arrives.

The game got off to a good start with both sides trading shots, but unfortunately, the Prussian side lost most of their Main Characters early in the game to failed Save rolls, leaving the 'Good Guy' Heroes, particularly Jasper Flint, the U.S. Marshal  to seriously damage the Prussian forces.  It took the whole game for the Allies to find the Queen, but in the end the Prussians just didn't have enough to stop them from taking her back.  This tied up the score for this scenario with 3 Prussian wins, and 3 Allied wins overall.
While I was running this, Buck and Dave were running their Battle of LaRothier in the next room.  This is a winter battle from the 1814 campaign.  The game turned out to be a close fought afair.
After a late lunch of pizza we set up and began our afternoon games.  I ran a "Look, Sarge, No Charts:WWII" game which was a Battle of Njimegan scenario.  The battle started off with the Germans in control of the town and it looked like the Allies would have their work cut out for them trying to dislodge the defenders.
I was called to command the Germans on the right, as we were short a player, and I ended up facing the brunt of the allied armor.  A lucky activation sequence, where the tanks got to activate twice with no reply from me, allowed them to create and exploit a breakthrough before I could suitably react.  This sealed our fate, and as the hour was getting late, we decided to call it a day.
While I was running Njimegan, Buck was doing a GASLIGHT undersea game, with  a lot of his cool underwater figures.  It was a multi-sided affair, with several different opposing groups trying to recover valuables from the downed Nautilus submarine, while Captain Nemo attempted to foil them.
All in all it was a really fun day, and we are already looking forward to Warhorse-Con IV.
Posted by Chris Palmer at 9:29 AM No comments:

Last Saturday, the "Bear Yourselves Valiantly"(Look, Sarge, No Charts: Fantasy, Ancients, and Medieval)  author team, Buck Surdu, Dave Wood, James, Nickle, and myself, along with Duncan Adams from the HAWKs, got together for a day dedicated to ironing out some of the issues that have been occuring with the rules over the past few playtest sessions we've run.  These issues mainly dealt with clarifying allowable movement, participant's roles in melee, and the exact roles of leaders. 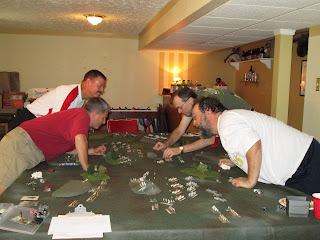 We played two games, first a War of the Roses battle, then a Rome vs Carthage one. Since playing the games to actually determine a winner wasn't the real goal, we were able to go real slow, stopping several times during the games to discuss aspects of the rules, and try different things out. It turned out to be a very productive session, and we believe we have most of the major issues ironed out. 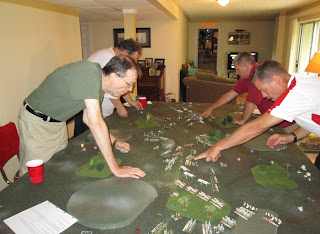 I'm looking forward to now trying out our new modifications in a public playtest coming up at Barrage, the HAWKs one day con in September. 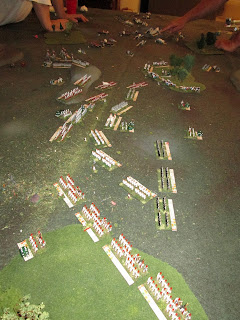 At last Friday's HAWKs meeting, I got to play in Duncan Adam's WWI "Look, Sarge, No Charts" (LSNC) game.  Duncan has been working on modifying LSNC for WWI for a couple years now; combining elements of both the ACW version of the rules, and the WWII one. While he usually used his 25mm figures, mounted for another rules set, for these playtests, he recently took the plunge into 10mm for this period.  This was the first time his new 10mm WWI LSNC armies got to do battle.
The scenario was from the early part of the war.  As the Germans are swinging southwest through Belgium, the French attack northeast into the hinge between these advancing Hun forces, and the other enemy forces on the German's left flank.  So, both sides had orders to attack; the French to seize a small town at the far corner of the table, and the German's to capture the three hills where the French first deploy.
I took the command of the lone French brigade that starts on the table, facing two German brigades. There is another French Brigade that enters after the first turn.
To begin, I boldly attacked on my left hoping to turn back the German right, catching them in a pincer as my friends entered on their other flank.   This attack soon petered out, and I  then found myself threatened on both flanks.  The concentrated German artillery was merciless, smashing any poor French unit who showed their heads in the open.
With the arrival of my compatriots, some of the pressure was pulled away from my right, but all thoughts of attack were gone now, I was just desperately trying to hold the German's away from their objective.  It was up to the other brigade to try and seize our objective.
In the end, we were very close to capturing the town, while the Germans had succeeded in capturing one of the hills, and were a turn away from the second.  All in all it was a close fought thing, and very exciting. I really love what Duncan has done with his modifications.  They really capture the punishing nature of this period of warfare, and you can see why it didn't take long for them all to start digging trenches.  And, his new armies were really beautifully painted, and a lot of fun to play with.
Posted by Chris Palmer at 4:44 PM No comments: