Bugs engages in a little miniatures gaming with Napoleon, and exclaims, "Hey Nappy, this has got Scrabble beat a mile! You oughta patent it!"

From this thread on BoardGameGeek:
http://boardgamegeek.com/thread/819245/bugs-bunny-is-a-wargamer
Posted by Chris Palmer at 5:28 PM 1 comment: 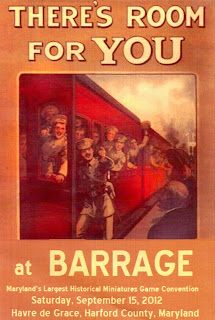 Barrage XVI  is now actively seeking gamemasters, vendors and gamers. Mark your calenders now for September 15, 2012.  Barrage is a one-day mini-convention run by the Harford Area Weekly Kriegspielers (HAWKs). It will be held at the Havre de Grace community hall, in northern Harford County, convenient from I-95.  In the past we've had a half dozen dealers, as many as 200 attendees, and thirty or more games. We hope to greatly increase these numbers this year, as we have moved Barrage to an even bigger and better location than before.  Bring your friends! Run a game!


The overall convention organizer is Geoff Graff (ggraff7@verizon.net, 410-557-2456). Please contact him for more information about the convention. Also contact him if you are interested in renting dealer or flea market space. 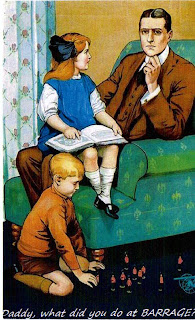 The Barrage website is now up and running, so check there to see more information and to see the PEL once we start getting game submissions:
http://www.bucksurdu.com/Buck_Surdu/Barrage.html
Posted by Chris Palmer at 5:31 AM No comments:

As Historicon quickly approaches, I am rapidly trying to complete all the Martian units I'm contributing for the big 20 player Mars Extravaganza GASLIGHT game Buck Surdu and I are running there. This week, I finally finished up my unit of 10 Tharks (six-armed green Martians). These figures are from Bronze Age Mniatures, and I really like their large size and dynamic sculpts.
There's also a lot of detail on the figures so, they were an ease to paint. 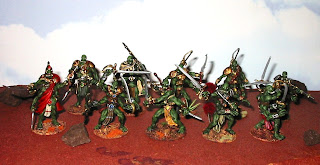 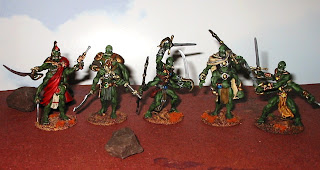 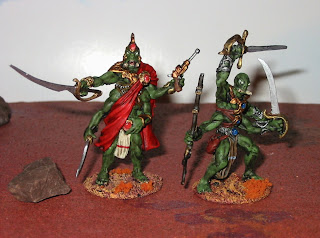 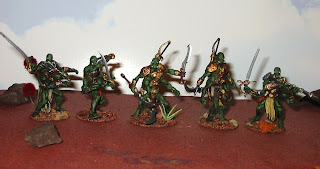 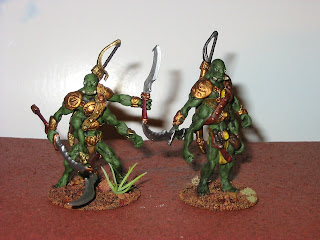 Posted by Chris Palmer at 5:14 PM No comments:

While at Origins a few weeks ago, I was at the Iron Wind Metals Booth where they had several boxes of assorted figures that they were selling by the ounce.  I was looking through the boxes, when I spotted a couple of these Giant figures. I really liked how they were bent over and looking down as if hitting something very small, and I immediately thought how great they would look with my current 10mm fantasy armies project.  I'm building 10mm fantasy armies for use in playtesting our upcoming "Look, Sarge, No Charts: Fantasy, Ancients, and Medieval" rules.  So, I purchased two of the Giants and finally got to paint them last week.

I'm really pleased with how they turned out, and next to the 10mm figures you really get a sense of them being 'giant'.  The Giant figures are available on the Iron Wind Metals website, sold under the name "Giant with Mace".

Posted by Chris Palmer at 5:05 PM No comments:

Fun Time at Fuson-Con I

Last Saturday a couple of us drove up to Sam Fuson's Warhorse Farm, near Gettysburg, PA, to take part in a game day we christened, "Fuson-Con".  Sam invited some of the folks from where he works, and some friends, all of whom had little to no experience with miniature wargames, and Buck Surdu and I provided the games.
We started the day with a "Look, Sarge, No Charts: WWII" game that I ran as a playtest for Historicon. The scenario was set in Russia 1941, during Barbarossa, and featured a German force consisting of two infantry battalions, an armored battalion, and a recon battalion, attacking a small Russian town located across a river.  The German infantry has to use rafts to cross the river, as the armor is using the only bridge to cross, and the recon is using the only ford.  Meanwhile, the Russians start with only one infantry battalion on the table, with armor and infantry reinforcements trickling in each turn.
The game was closely fought throughout, and we had to call it due to time constraints just as the Germans were attacking the outskirts of the town.  It was deemed a narrow Russian victory, though with another half hour of play, it could have gone either way.

After the WWII game, Buck set up a "To Be Continued...by GASLIGHT" game.  This scenario was episode 4 in a continuing story arc Buck is doing featuring the pulp hero, Duke Morrison.  In the last 'episode' the evil Venusians and their hired human thugs,  kidnapped a scientist's daughter and stolen the machinery from his lab, and in this 'episode' they have taken the girl and scientific equipment to the middle east, where Duke Morrison and his fiends have tracked them down and are now trying to rescue the girl and get the scientific equipment back or destroy it.

In the end, Crash Corrigan and his rocket men were able to destroy the scientific equipment, but the scientist's daughter remained hidden.  And worst of all, our hero, Duke Morrison, had fallen captive to the Venusians.  Who knows what evil plans they have in store for him!  To be continued....:-)
After the Pulp GASLIGHT game, Buck set up his pirate tavern as a finale for the day, using his "Blood & Swash" rules.  Mayhem ensued as opposing bands of pirates fought to capture and remove the tavern's treasure chest, and the tavern keeper's daughter.  In the end, Greg was able to get the treasure chest out of the tavern, but in an unfortunate mishap, Sam accidentally shot the tavern keeper's daughter as I was trying to carry her from the tavern.  Every one had a good time with this free-for-all game.


The event was a huge success, and everyone said they were looking forward to when we could get together and do it again.  May thanks to Sam for hosting this fun day.
Posted by Chris Palmer at 11:40 AM No comments:

This past weekend, Buck Surdu, Dave Wood, Greg Priebe, and I, traveled out to Columbus, Ohio for the Origins convention. Out goal was to showcase our "G.A.S.L.I.G.H.T." and "Look,Sarge, No Charts" rules systems to a different set of gamers other than the regular folks we see at the local HMGS East conventions.
Buck and I each ran two LSNC games and two GASLIGHT games, and Dave Wood ran three additional LSNC games. The two LSNC games I ran were a WWII 1941 Russian Front Scenario, and a ACW First Day of Gettysburg Scenario.
My WWII scenario I ran on Saturday morning.  It featured a German attack on a small Russian village near a river,  with the infantry using rafts to cross the river, while the panzers crossed the same river over a single small bridge.  The Russians are under strength to begin the game, but receive reinforcements as the game progresses.  The figures used were 10mm.

The game ended in a Russian victory, as an unfortunate series of activation sequences kept the Germans from quickly getting the bulk of their forces over the river.  The players picked up the rules quick;y and seemed to have a good time.
Saturday night I ran my First Day of Gettysburg scenario.  This game begins with the battle as it was around 2:00 PM on the fist day.  The figures used were 10mm


In he end, we ran out of time before a clear victory was established. I was very pleased with the look and feel of this scenario.
Posted by Chris Palmer at 4:32 PM No comments:

This past weekend, Buck Surdu, Dave Wood, Greg Priebe, and I, traveled out to Columbus, Ohio for the Origins convention.  Out goal was to showcase our "G.A.S.L.I.G.H.T." and "Look,Sarge, No Charts" rules systems to a different set of gamers other than the regular folks we see at the local HMGS East conventions.
Buck and I each ran two GASLIGHT games and two LSNC games, and Dave Wood ran three additional LSNC games.  The two GASLIGHT games I ran were a Fleet Battles by GASLIGHT scenario and a regular Basic GASLIGHT scenario.
We arrived Thursday evening, and Friday morning I set up my first game which was my Fleet Battles by GASLIGHT scenario called "Hunt for the Valkyrie on Mars."  The back story for this scenario was that a large German aircraft carrier on Mars had been caught in a Martian storm and blown off course and badly damaged.  It was now lost in the middle of nowhere and crippled.  The German and British fleets were searching for her, the Brits wanting to destroy her, and the Germans wanting to save her.


In the end, the Valkyrie's engines failed her as she suffered a series of failed Sustain rolls, leaving her susceptible to torpedo attacks from the British.  She eventually took a critical hit, and broke apart and fell to the Martian surface.  All the players seemed to have  good time, and i really enjoyed GM-ing the game.

That evening I ran my "Lost Legion of Venus" GASLIGHT game.  This game has a French force consisting of Foreign Legion and regulars which is lost somewhere on Venus and has become surrounded by hordes of local Parrotmen and Lizardmen.  The French must survive the battle and beat off the attackers to win.


The game was declared a marginal Venusian victory at the end.  The French forces were shattered, and their walkers destroyed or disabled. Though surprisingly, Victoria Hawkes, usually a bullet magnet, survived!
All the players seemed to have a good time, and really got into the spirit of the game.  For me, the great players and the way the battle unfolded, made it one of the best runnings of a GASLIGHT game I have had the pleasure to run.
Posted by Chris Palmer at 12:04 PM 1 comment: