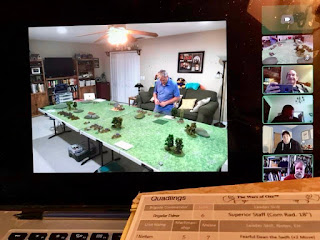 
We managed to complete the game in 4 hours, which was pretty good considering we were all working long distance with just Buck to move all the troops.  Victory was based on stands eliminated, and in the end the Winkie-Gillikens had eliminated 27 of ours, to our side having eliminated 23 of theirs; a pretty close fight.
Posted by Chris Palmer at 11:50 AM 2 comments: