Inspired by photos I've seem on the web of "steampunk" style weapons others have made, that were converted from Nerf guns, I set about to make one of my own.
I chose a Busy Bee Toys' Ultimate Snipe Blast as the basic gun I would start with. This is a Nerf style gun, but much cheaper, not having the Nerf brand name. 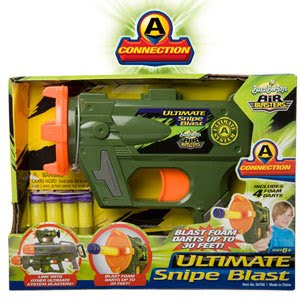 I began by removing all the screws and soaking the gun's parts in water and dishwasher soap to help remove the mold release on the gun's surface. I left it to soak over night then dried it and reassembled it without the firing parts inside. I also removed the handle in the back used for cocking the weapon. 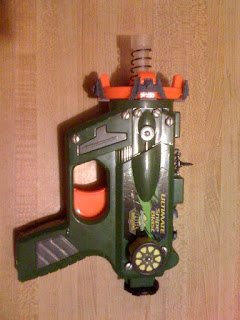 Then began the fun part of gluing on the bits and bobs to transform it into a VSF looking weapon. I used an assortment of scrapbooking craft gears and screwhead brads, and plastic model bits, a clix base and some other bits. 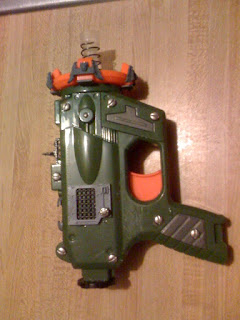 I then sprayed the whole thing with Krylon Fusion Camo Flat Black. When this had dried, I drybrushed it with a gun metal craft acrylic, and then picked out detail with copper and brass colors. 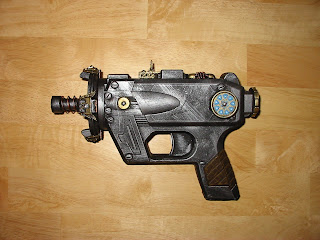 I'm very pleased with the results, and I must say that the whole process was a lot of fun. I think I am going to make some more of this kind of weapon, and see what I can do with other styles of Nerf type guns. 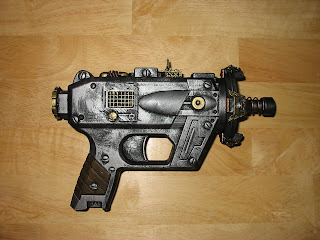 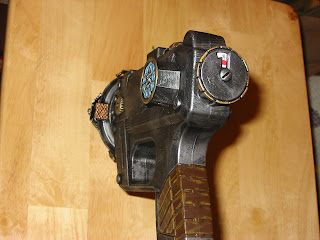 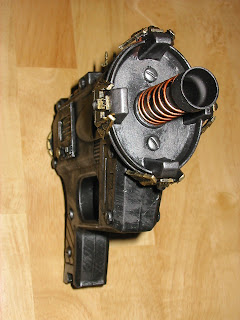 A Few Figures For Cold Wars

I'm busy getting everything ready for Cold Wars, which is fast approaching. I thought I'd take a moment and post some photos of a trio of figures that I have recently completed for my "Victoria Hawkes and the Lost Roman Colony" Cold Wars game. 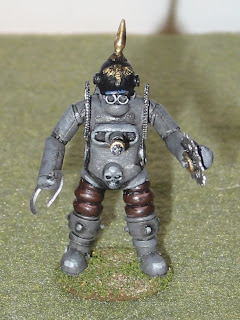 German clockwork armored suit made by Eureka Miniatures. Called "Krieghosen" on their website. 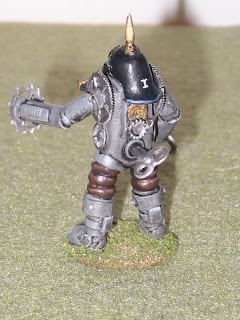 Rear view of the Kireghosen. I love the gears and key details. 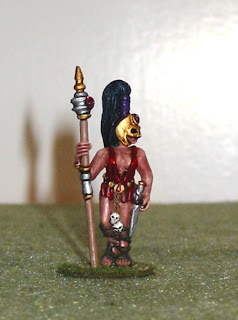 The evil Roman priestess. This figure is a Shadowforge Dark Temple Acolyte. 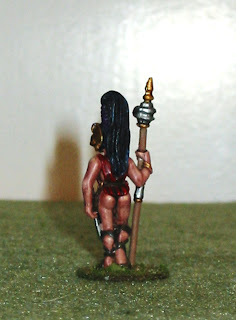 Back view of the priestess. Probably a little more of a 'back view' than is proper. But then if you're an 'evil priestess' you can get away with it. 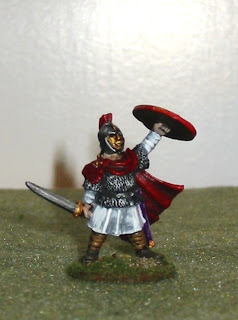 The heroic Roman General. I believe this might be a Foundry figure, but I got it in a lot of assorted figures, so I may be mistaken. 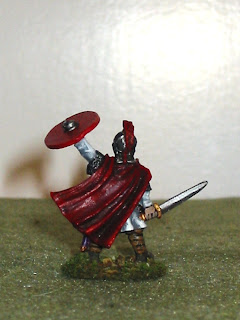 Back view of the Roman General.

As I explained in my entry from three weeks ago, our club is embarking on a zombie project. Everyone is responsible for painting 20 zombies since non of us wanted to paint hundreds on our own. I showed the first ten zombie figures I had finished in the entry three weeks ago, and today I am showing the second ten. We are using the Wargames Factory plastic zombies and I really love their multi-pose options and conversion potential.
I also completed a female zombie hunter that I converted from a Horrorclix figure. 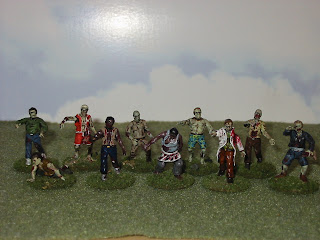 Here's a shot of all ten zombies in my second batch. 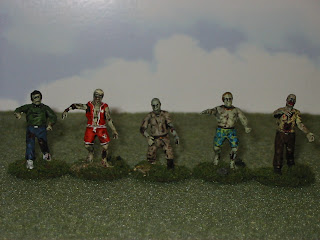 This is a closer look at half the group. I'm really pleased how these turned out. 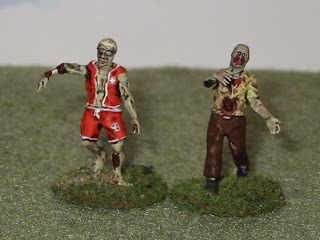 These are two of my favorites; the Life Guard and one that's taken a close range shotgun blast to the chest. 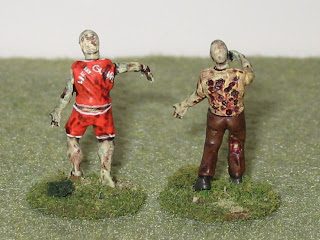 Here's a view of their backs. I love the irony of a zombie being a "life guard", and James 'Tank' Nickle gave me the idea for the shotgun zombie with the big hole in front and all the smaller exit wounds on the back. 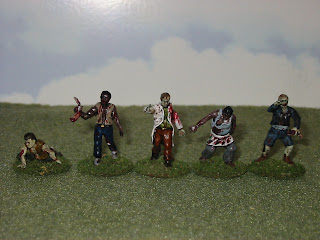 This is a closer look at the other half of the second batch. 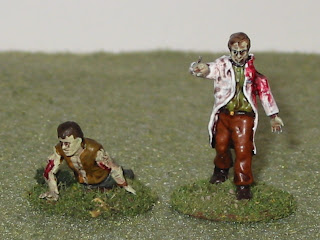 This is two of my favorite conversions; the crawling zombie who's lost his lower legs, and the doctor zombie that has large shoulder damage from being a zombie's lunch. 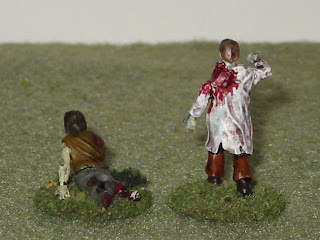 Here's a view from the back of these two. 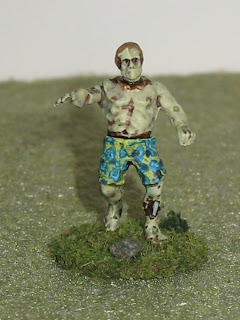 This is another favorite; the swimmer zombie. I'm really pleased with how the floral pattern on his swim trunks turned out. 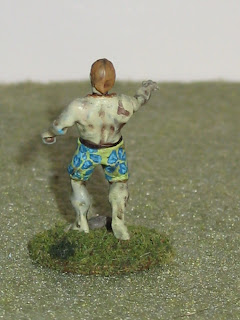 Here's a back view of the swimmer zombie. 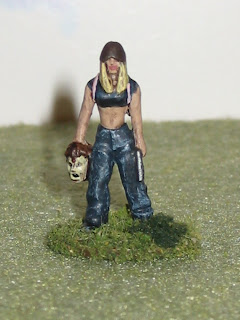 This is a zombie hunter converted from the Horrorclix "Runaway" figure 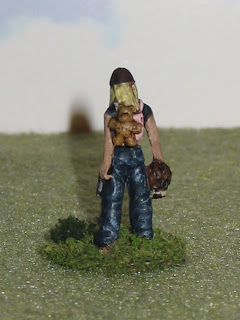 Here's a back view. I love the teddy bear on the back pack. 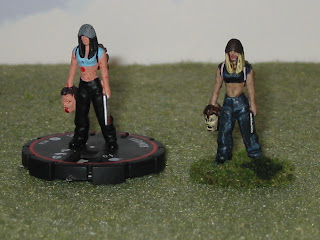 Here's a look at the original Horrorclix figure and the conversion side by side. The original figure is holding a hacksaw in her left hand which I cut down to to look like a pistol.