I just wanted to let folks know about a neat Kickstarter that I just backed: Tablescapes Dungeons Mines brought to you by Secret Weapon and Reaper.  What I like about this Kickstarter is the nifty mine track and cart Add-On.  Also, it is all compatible with my Dwarven Forge stuff.
Currently the Core Sets gets you 76 components for $75. 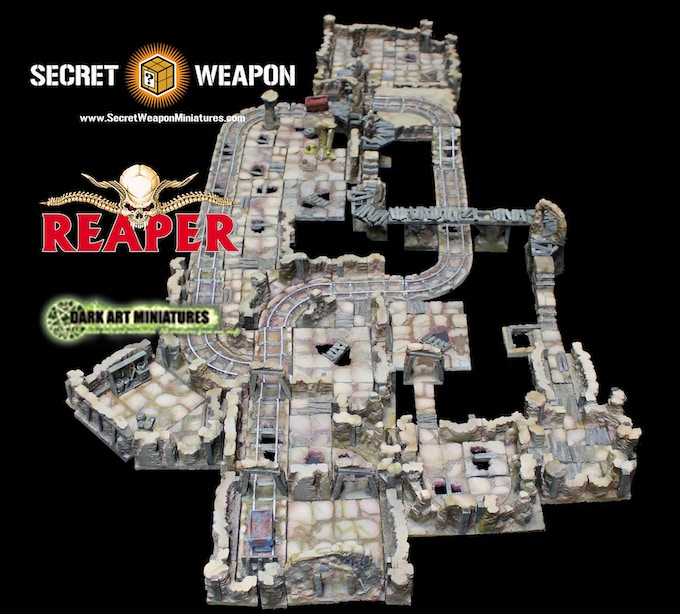 They are also offering a number of sets of Bones Minis for those who missed out on any of the Reaper Bones Kickstarters, as well as a selection of sets of Reaper paint!

You can find more info here: Tablescapes Dungeons Mines.  Please check it out, and if possible, pledge! :)

Posted by Chris Palmer at 9:13 AM No comments: 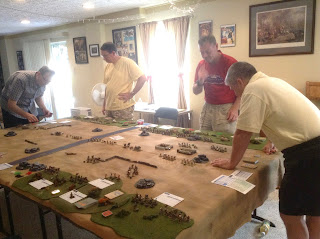 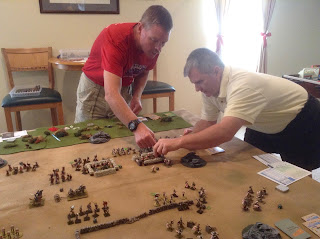 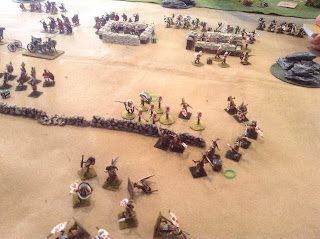 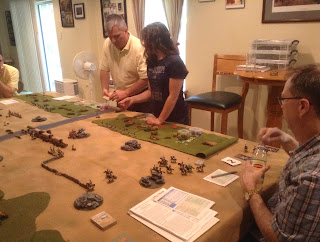 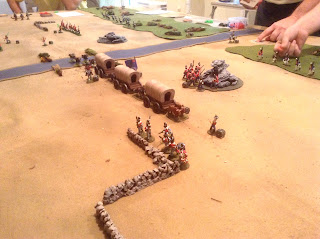 Posted by Chris Palmer at 8:29 PM No comments:

Knabe the Druid's report can be found here:  The Killing Dart
Posted by Chris Palmer at 9:59 AM No comments:

I just wanted to let everyone know that the website for the HAWKs gaming convention, BARRAGE, just went live this week at: https://www.hawks-barrage.org
The event will be 2 days this year, 9/30-10/1, and you can now register to attend or run a game directly on the website. 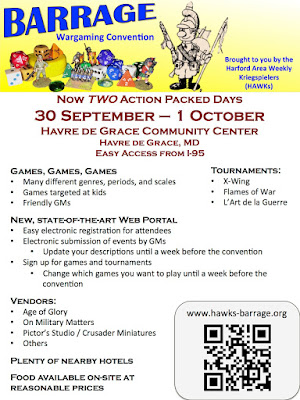 Posted by Chris Palmer at 8:06 AM No comments:

This past Saturday a group of the HAWKs and I went up to Sam Fuson's War-Horse farm in PA for another fun day of games and good food. A couple times a year, Sam and his wife Kathy invite a bunch of their friends over and the HAWks come up to put on several games as well as play, and these events have come to be known as War-Horse-Cons.
Since Sam and Kathy were expecting a larger than usual crowd, I volunteered to be the on-call GM, and brought along my Frostgrave stuff to set up and run if there should be an overflow from the two regularly scheduled games.  Luckily I did, as I got to host a family that had come along with their husband/dad who was interested in playing in Ed Duffy's Modern era game.  I think they had very little, if any, experience with miniatures gaming; but they jumped right in and had a great time with the Frostgrave rules.  While the three teenagers did great, I felt sorry for the Mom, who could not roll any high numbers to save herself!  There are bunch of us in the HAWKs who could relate to her predicament! :) 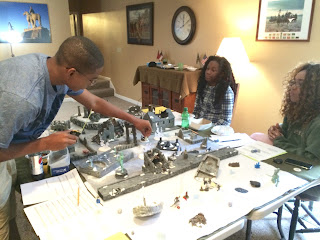 They all had fun, and got into the spirit of the game; and I had a great time running it.  Who knows, we may have some new converts to the hobby! 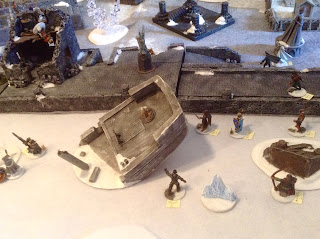 While I was running my game, Eric Schlegel was running his Napoleonic "Battle of Battin", Russians vs Turks game, using modified Regimental Fire & Fury rules. 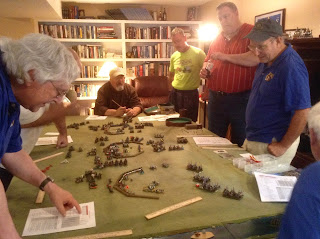 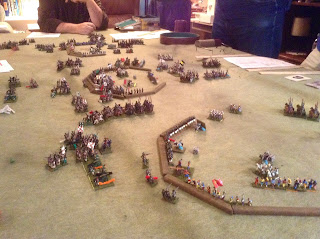 And in the other half of the basement, Ed Duffy was running his Modern game using home-brewed rules. 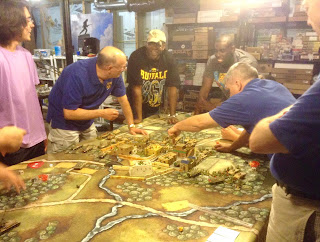 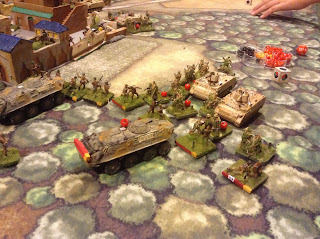 After a great fired chicken lunch, we reconvened for the afternoon games.  Some folks left, so I wasn't needed to run my game.  This allowed me to jump into Buck Surdu's fun Pacific Theater WWII game using his new Combat Patrol rules. 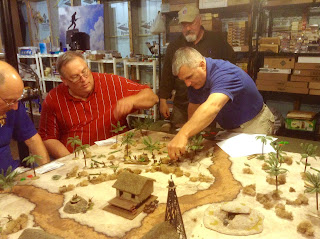 I ended up commanding two bazooka teams and an army platoon leader.  We were tasked with blowing up a Japanese radio tower on an unnamed island somewhere in the Pacific.  Unfortunately, I had no luck whatsoever, and soon both my bazooka teams were out of action, having barely even scratched the paint on the one Japanese tank guarding the base.  However, it looked like our side was doing really well until in rapid succession the tank got a direct hit on one of our squads, followed by a pair of mortar rounds hitting another squad who had just broke cover and entered the compound.  With our forces badly mauled, and the bazookas out of action, we decided to call it a day. 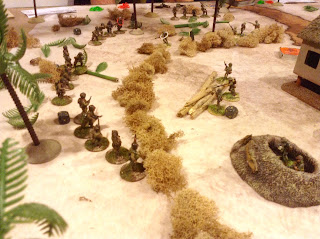 While we were battling in the Pacific, Duncan Adams was running his WWI game in the other side of the basement, using modified Look, Sarge. No Charts rules.  This was an early war scenario with both the French and Germans stumbling into each other's advances. 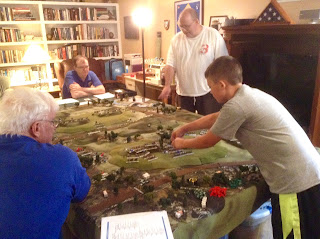 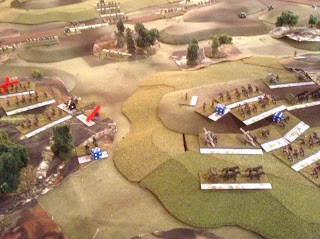 All-in-all it was a great day of gaming with a great group of people.   I look forward to the next time we can get together and do it again!
Posted by Chris Palmer at 3:41 PM No comments:

This weekend I finished up my Chronomancer warband for Frostgrave.  I've been working on this off and on since last October, and finally finished painting the last figure on Friday.   I wanted to assemble a band that looked like they had been brought together from throughout time; or had been to different time periods, and brought back souvenirs.  I did some customization to a few of the figures to get that Frostgrave-meets-other-time periods look I wanted.

First up is the Chronomancer and Apprentice.  These are both modified Reaper Bones figures. 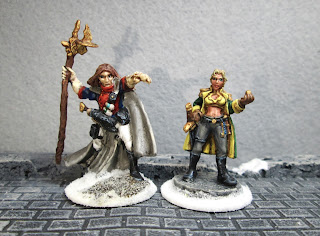 Next is the party's Templar, "Crossbowman", and Man-at-Arms.  The Templar is made up mainly of GW Space Marine parts, the "Crossbowman" is a plastic French soldier (unsure of manufacturer), and the Roman is from Foundry.  Note, that the Foundry figure was so short compared to the other figures in the warband, I had to base him up on a sheet of cork to make the size difference less noticeable. 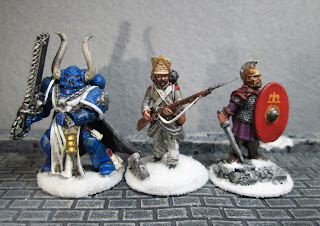 We then have a Thief, and two Thugs.  The Thief is a Reaper metal Ninja figure, and the two Thugs are from the North Star plastic Frostgrave soldier set with the additions of different heads. 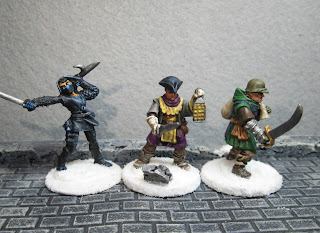 Lastly, we have the group's War-Hound.  This figure is from Eureka, and is just filling in as a proxy (probably) until I get the guard dog figure from the Reaper Bones III Kickstarter this Fall. 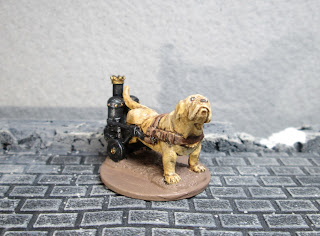 And here's a look at the gang all together: 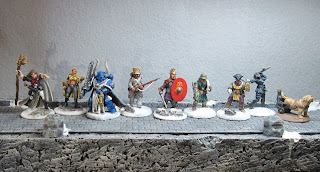 I'm very happy with how this group turned out, and I'm looking forward to get a chance to use them in a game!
Posted by Chris Palmer at 11:51 AM 2 comments: