Fall-In Playtest Game: Doctor Who and the Pirates of the Cyberiad Main

A few of us got together yesterday to playtest a couple of our games for the upcoming Fall-In convention in Lancaster PA.  I ran a Doctor Who scenario called "Doctor Who and the Pirates of the Cyberiad Main", using GASLIGHT rules.  The set up was that the Doctor was enjoying a trip to a quiet 18th century Caribbean island when it was unexpectedly invaded by pirates who had rescued some Cybermen from their spaceship which had crashed somewhere in the ocean.   The Cybermen had made a deal with the pirates, and the prates had agreed to secure victims captives for the Cyberman.  So the goal of the Cybermen/Pirate players was to capture 6 Townsfolk and/or Garrison troops, and carry them back to their landing boats.  Meanwhile the Doctor had to  travel to three different buildings in the village to collect the equipment he would need to make special ammunition that would penetrate the Cybermen's armor (otherwise they were very hard to disable.)
It was a fun and exciting game that went right down to the wire, with the Cyberman/Pirate alliance coming out on top with 6 captives in the end.

The most exciting part of the game was when the Doctor and his companions (Amy, the Governor of the island, and the Governor's Daughter) attempted to get the last item the Doctor needed.  It was in a warehouse that was overrun with pirates, so the only way the Doctor could get in safely was by an upper story window. So, they ended up hovering in the TARDIS outside the window as the Doctor leapt trough the window into a room full of Pirates.  Amy tried to follow, but fell and was knocked unconscious when she hit the ground.  After the Doctor fought the pirates ineffectually for a couple turns, the Governor decided to jump across too, and a fun multi-turn swashbuckling duel occurred.  Eventually they cleared the upper floor, and the Doctor was able to secure the last item he needed, but it was a little late in the game, and the Cybermen/Pirate team were already near their victory goal.
I'm really looking forward to running this again at the convention in November!

This past Saturday we got together to play the 9th game of our 2017 Frostgrave Campaign.  We moved on to the next scenario in the Thaw of the Lich Lord supplement: "The Dark Cauldron".    The Dark Cauldron involves a group of the Lich Lord's Death Cultists mixing up a big batch of Zombie soup in a large Cauldron.   Each turn a Zombie crawls out of the Cauldron and shambles off to attack whoever is closest.  Players can opt to tip over the Cauldron, and then drag it away for later use or destruction.  Of course, because we had 6 of our regulars playing, our scenario became: "The Dark Cauldrons"; and we put 3 of the zombie spewing cauldrons evenly spaced down the center of the table, each with their required Death Cultist crew.  The Lich Lord was obviously trying to swarm the whole city with his Zombie minions.
To read the report from last month's game, click here: The Lair of the Ghoul King & Queen
We had learned from last month's running of the Lair of Ghoul King & Queen that we needed to set up the table a little more carefully; and we endeavored to place buildings and terrain so no player could enter and form a firing line with which to decimate the Death Cultists on turn one.   I did well on the set-up location chip draw, getting second choice; so I picked a corner by a large black tower, with a covered set up area behind an old warehouse.  Bemis, the other Sigilist, ended up across from me,  Missy, the Necromancer, was to my left, and the the Summoner, Challara, was diagonally across from me.


Earlier that morning, Quail and Bailey had stood up on the their tower's parapet looking out over the distant ruins of Felstad, which were currently covered in a foul scarlet-toned mist and fog.  It stank of evil, and had been a distant source of gloom and depression for the last three days now.  What was worse, was they had been hearing more and more tales of people who had disappeared in the night from the local taverns and villages; more so than was usual this close to the magical ruins.  Other, lesser wizards, had already left the city.   Quail fidgeted with the magical crystal seeing glass, the one they used to interpret their Magical Atlas of Felstad; turning it over and over again absentmindedly in her hand.  Any attempt to decipher the maps had become all but useless with the permeating mist...the vapor definitely had magical qualities she thought to herself.  The gloom they all felt was not natural. (Both Quail and Bailey failed their pregame Reveal Secret rolls)
It was a little heartbreaking too, as the Sigilist had recently begun to truly see the old Bailey back with them again after all the emotional turmoil the young woman had gone through.   News that the Sigilist Bemis' Apprentice, Agarn, was all right, and had survived unscathed from the Grenade Attack Bailey had thrown in a fit of rage, had buoyed Bailey's spirits even further.    Then the mist had set in and everyone had become depressed and sullen.  Quail found herself thinking more and more of her University.  She missed her dear Library and it's books.  The Maga Librarian's allotted time away from the University would be coming to an end soon; and as much as the Sigilist had wanted to get away a year ago, she now found herself looking forward to returning.  It all seemed so hopeless here.
"Maybe we should head back to the University sooner."  Quail said aloud to no one in particular.      "Ma'am?" Bailey turned, snapped out of her own gloomy thoughts.
And as soon as she had said it, the Sigilist realized it was the mist putting these thoughts in her head.  She shook her head to clear it.  There was still some evil at work here, and she wanted to get to the bottom of it.   "Nothing, Bailey.  Just a little homesick.  That's all." and she forced a smile onto her face.  "Let us go prepare some potions.   I think some activity, like a foray into the ruins, will help everyone shake this malaise."  And, she thought to herself, "Will give us a chance to see what is causing this unnatural fog."
A short while later, Quail found herself further brought down when her attempt to brew some helpful potion before the trip failed miserably.  Luckily, Bailey had better success, and cooked up a nice Invisibility brew, raising the young Apprentice out of her doldrums a little.  (Quail fails to cast Brew Potion, Bailey successfully cast it.)

To read Bemis' report from the game see: The Cauldrons
Posted by Chris Palmer at 10:35 AM No comments:

This past week I assembled a prototype Bone Wheel terrain piece for the "The Bone Wheel" scenario in the Frostgrave supplement book, Thaw of the Lich Lord.    Since we usually have 6-8 players in our Frostgrave Campaign games, I intend to make three more of these now that I have finished the prototype.
The scenario describes the Bone Wheel as, "A gigantic wheel, sitting some eight feet off the ground on a central axle...the wheel is constructed of human bones, bound together with old leather straps..."   I knew there was no way I was going to make a big wheel out of 28mm bones, as it would take hundreds, so I headed to the local Dollar Tree store in hopes of finding something that would be bigger than 28mm but not so large that it wouldn't look too out of place with 28mm scenery and figures.
Happily, I found a skeleton Halloween garland that looked like it would suit the purpose perfectly. 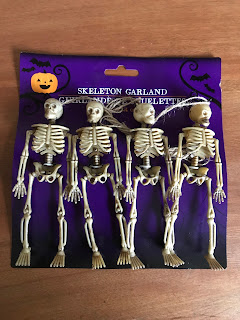 But, before I built the wheel, I wanted to make the central axle.  So I dug through my wood bits box, and found some pieces I thought would work; a disc, a couple small spools, and a small soda bottle shape.  I glued those in a stack on a 2" fender washer. 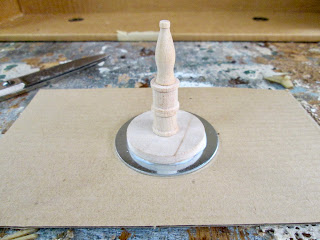 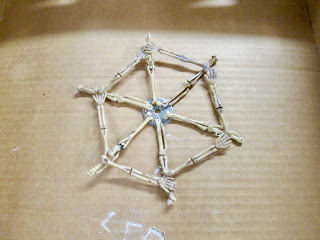 I decided the center needed some sort of cover piece,  so I cut one of the ribcages in half, and glued that to the center.  I then did a test fit of the two parts. 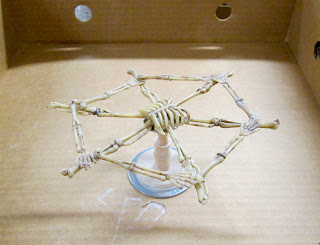 Happy with the fit, I used some of the string that came with the garland to make some lashings around the bone junctures, where the central spokes met the outer rim bones. I then sprayed the parts with flat black primer.  And, as seen in the photo below, I began drybryushing the central axle with some aged wood colors. 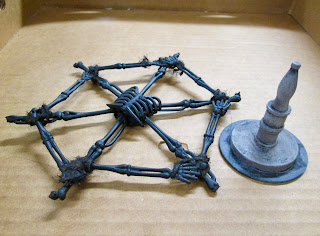 It was just a matter of finishing painting everything, and then fitting the two pieces together.

I'm happy with how the project turned out.  Since this is a scenery piece that will probably only ever be used for this scenario, I didn't put a lot of effort into it.   Still, for a quick job, I think it looks pretty good.
Posted by Chris Palmer at 4:35 PM 8 comments: