For a long time I've been looking for a suitable ship for my Teddy Bear Pirates from Eureka. I always had in my mind it should be some sort of rubber duck looking vessel, but I never found a rubber duck I liked. One large enough to be a ship big enough to carry more than a couple teddy bears.
Well, that all changed today during a trip to Target.  In their "cheap crap" department at the front of the store, they had these great plastic rubber duck watering cans.  Shown in the photos below with a Eureka Teddy Bear Pirate for scale. 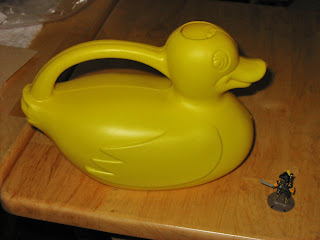 I wanted to get this posted now, before I had a chance to do any work on the duck, because I figured these were seasonal items for Easter and/or Spring, so might not be around in Target for much longer. And, I wanted anyone who was interested in getting one, to have a chance to before they were gone. 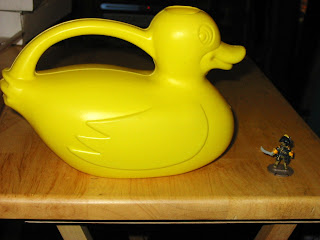 My plan at this point is to cut off the handle and a section of the back to make an open deck. I think the hole in the duck's head will become a crows nest, and the pour-hole in its bill will become a gun port. 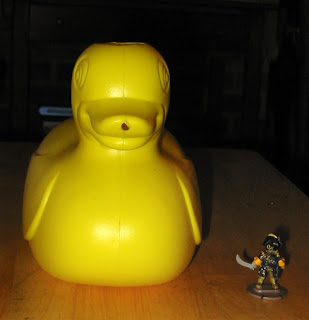 Last Saturday night, at Cold Wars '13, I ran my "Santa Claus vs The Nazis" game using G.A.S.L.I.G.H.T. rules, and 28mm figures.  The game description, as it appeared in the program, was:


Bent on obtaining fabled and occult objects from across the globe,
Hitler sets his sights on the magical factories of Santa's North Pole
workshops. If these factories could be turned to munitions
production for the Third Reich, nothing would be able stop the
Nazi war machine. The Fuhrer dispatches a team of commandos to
capture Santa's workshops. Can Santa, his elves, and toys stop the
invaders, or will evil prevail?

I had a nice turnout of kids, teens, and adults, and every one of the 8 gamer slots was filled. The game begins with each of the three German players selecting one of the woods patches surrounding the North Pole workshops for their initial deployment. One player's forces per woods.  The North Pole Defenders start at random locations around the compound.  The objective was for the Germans to capture four of the six main buildings in the compound.

You can click on any photo to see it larger.
The Germans began by attempting to soften up their targets with long range fire.  In the end this may have been a mistake, as their superiority in firepower was reduced at long range, and they lost precious time that they could have used later in the game to achieve their goal.
The North Pole defenders, began by concentrating on the German's MkIV tank, knowing taking this out was a major key to their success.  Luckily, fate was with them, and the tank's engine conked out in the bitter cold (The player failed the vehicle's Sustain roll with a roll of 20) and the tank was left immobile on the edge of it's initial deployment woods for most of the game.
The Tank was only supported by one German squad with a machine gun,  and the Nazi's overall commander "Panzerkopf". A fierce battle developed on that side of the compound as Santa himself, and his pet, Polar Bear, charged into combat. Santa heading straight for Panzerkopf, and Polar bear for the MG team.
After a melee that lasted several turns, Santa finally defeated Panzerkopf, and Polar Bear was making bear kibble out of the machine gun squad. Eventually though, Major Shaub, the German's second in command, was able to get the drop on Santa, and eliminated him, while survivors of the MG squad were able to deal with Polar Bear.  Ultimately a charge from the North Pole Elf Militia  finished off the Germans in this area, leaving only the tank.  A pair of  Mechanical Santas with their hammer-arms, moved up to hopefully finish off or permanently disable the tank.
Meanwhile, on the north side of the compound the Toy Soldier squads were taking their toll on the attackers, and were able to eliminate one German squad entirely.
It was on the North Pole Compound's east side, that the defenders were their weakest, and the Germans had their most success.  A squad of She Wolves, and one of regular troopers were able to cut their way through two units of Snowmen (Aim for the magic hats!) and the Germans were eventually able to occupy two of the buildings on that side.
That however was as far as they got, and with their numbers severely reduced, and the North Pole defenders having several units still unscathed, the game was determined to be a victory for the North Pole team.
A great time was had by all!
Posted by Chris Palmer at 10:45 AM 1 comment:

Co-authors Buck Surdu and Dave Wood put on a combined four "Fate of Battle" (aka- "Look, Sarge, No Charts: Napoleonics") Napoleonic games at Cold Wars this past weekend. All were well attended, and most all the players seemed to have a good time, and picked up the rules quickly.

Dave Wood's game was The Battle of Laon, 1814. Dave re-purposed his old 25mm Minifigs by putting them on magnetic “sabot” bases and adding labels. You can see the game looked great and was a nice way to play the game without the effort of permanently rebasing his figures.


Buck ran three "Fate of Battle" games, using his collection of 10mm Old Glory figures. He writes of his games:


"I ran three games at Cold Wars 2013 with 10mm Old Glory figures. All three were 1814 scenarios from a scenario book we are writing: Vouchamps, Montereau, and Craonne. The games went very well. Each of the battles was very tight until the end. At Vouchamps, the French captured two of the three roads along the Prussian line of retreat. At Montereau, the French only penetrated one of the three phase lines needed to achieve victory, so the Austrians eeked out a victory. At Craonne the French had initially achieved all their victory conditions; however, when their cavalry routed and a Russian brigade pushed through a gap in the French line, the Russians emerged victorious. The players quickly caught on to the rules and were running the game by themselves after a couple of turns. I saw a bunch of folks walking around the convention with copies of Fate of Battle under their arms."

Posted by Chris Palmer at 8:40 AM No comments:

"Bear Yourselves Valiantly" at Cold Wars '13

Cold Wars was this past weekend and we ran the first public playtests of our upcoming "Bear Yourselves Valiantly" rules (aka Look, Sarge, No Charts: Fantasy, Ancients, & Medievals).  I ran a fantasy game on Friday night, and James 'Tank' Nickle ran a Punic War game on Saturday afternoon.
I had a full compliment of players for my Friday fantasy game, entitled "The Desperate Defense of the Elvish Kingdom".  The figures were 10mm, and the  scenario featured two forces of High Elves supported by a force of Wood Elves, guarding two bridges from an attacking army of two Skeleton forces, and one Goblin force.
(Click on any photo to see it bigger.) 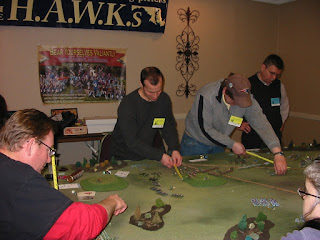 The players seemed to pick up the rules quickly and had a good time too.  The game was a close fought thing, with the Elves narrowly able to squeeze out a victory and maintain control of both bridges by game's end, despite hard attacks from the enemy. 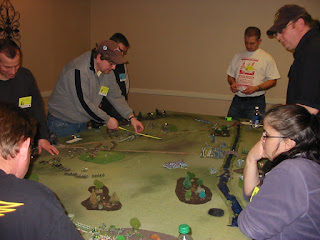 On the Elven right, repeated Skeleton attacks had them forced back and badly battered, but they never broke. Likewise in the center, where the Goblins hurled themselves at the Elves' line again and again doing heavy damage, but in the end the Goblin force was shattered by the rank of Elven archers supporting the infantry and the Elven infantry held. Things might have turned out differently as a Skeleton force in the center was going to finish what the Goblins started, but the unlucky player failed his morale roll for his skeletons (The skeletons can only fail morale by rolling a 1 on a d10), and the force retreated before it could land the killing blow 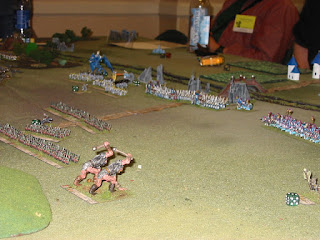 And on the Elves' left, where a column of Wood Elves was marching to assist their brethren, the Goblins committed their Wargs, Giant Spider, and Bats, all of which were virtually destroyed or routed, though the Goblin forces did hold the Wood Elves back and kept them from reaching the main Elven lines. 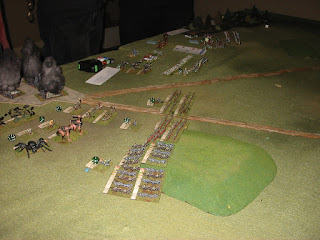 In the end, with the attackers spent, and the Elves still holding on by their fingernails, we ended the game and declared it a Elven victory. 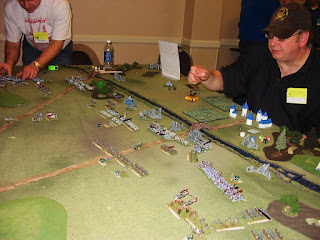 The rules worked very well, and we were pleased with how the game went, and the players' ability to pick them up.  We got a few suggestions for improvements, which we are already working on incorporating. 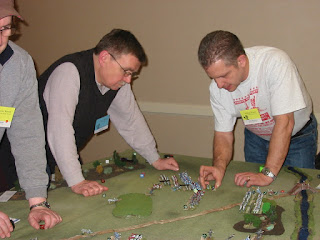 Saturday afternoon was Tank's Punic Wars game called, "Look, Sarge, the Punic Curse". It featured three Roman legions attacking Hannibal with a mixed force of Carthaginians, Spanish, and Celts. The Roman's goal was to capture the Carthaginian camp, located at the rear edge of the Carthaginian deployment area.  The figures were 10mm. 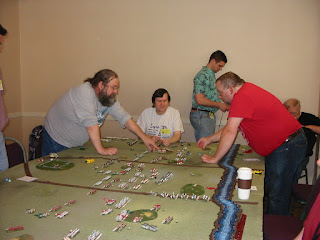 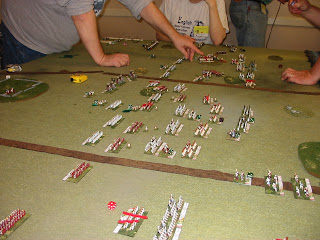 In the end the Carthaginians eked out a narrow victory with the Roman center being shattered, and the camp still in Carthaginian hands. 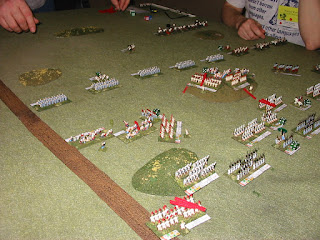 Just as with the Fantasy game, the players seemed to pick up the rules quickly and had a great time. 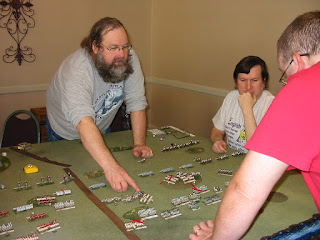 I'm already looking forward to Nashcon in May now, where I will get a chance to run the rules again for a new group of players.
Posted by Chris Palmer at 6:03 PM No comments: