On a recent trip to the Dollar Tree Store I came across these packs of plastic icicle ornaments, and were struck by their asymmetric, uneven shape. I bought a few packs to experiment making terrain for my Christmas Wars games. 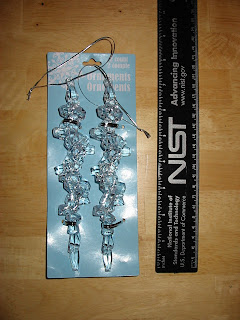 I first clipped the hanging ring off of the top end. Then I cut the icicles in half into uneven lengths using a hack saw. I cut them at an angle so they would lean out in random directions when based. I then glued the cut halves onto rough circles I had cut from foamcore. Finally I textured the bases with Woodland Scenics snow. 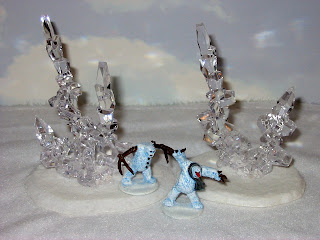 I'm very pleased how they came out, and I think I will also try making a few and spray painting them and then painting them up like rocky spires for more conventional Sci-Fi and Fantasy games. 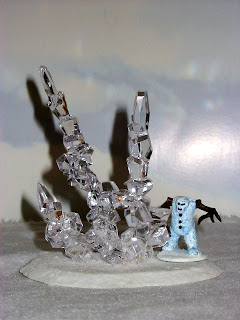 I began work on a Dystopian Wars project last month by painting my first fleet. I picked the Federate States of America fleet as I liked the look of it the best. The boxed starter fleet comes with a battleship, 3 cruisers, 9 frigates, 2 bombers, and 10 tiny resin aeroplane counters. I also purchased the aircraft carrier separately
The models are mostly cast in resin, with the turrets being cast in metal. There was a bit of flash, especially on the frigates which needed to be cut away.
I began by spraying everything with a flat black primer and then drybrushing with GW Chainmail to bring out the details in the metal work. The details sculpted into these models are amazing, and really lend themselves to drybrushing. The decking was done with Americana Khaki Tan with a GW Devlan Mud Wash.
I am currently painting the Kingdom of Britannia Fleet, and will post pictures of it when I am done. 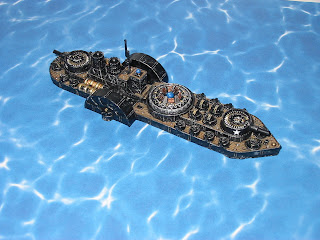 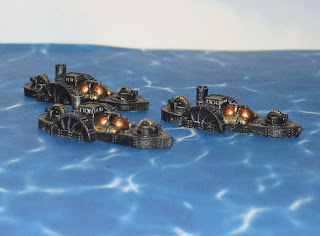 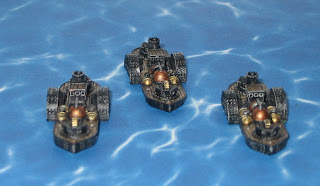 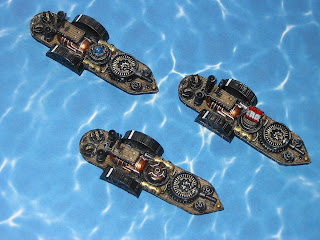 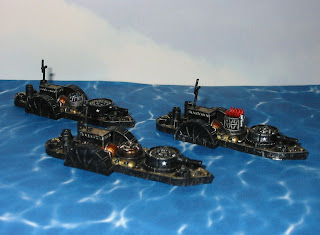 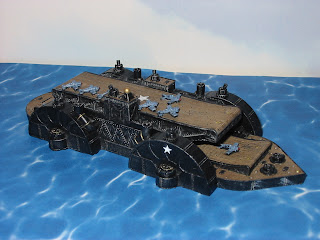 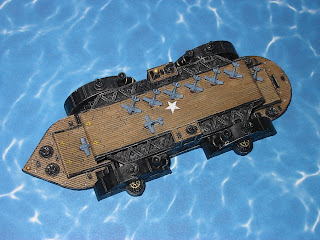 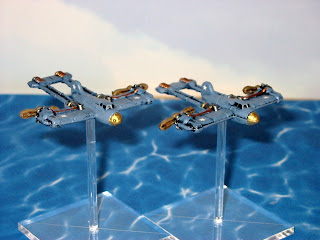 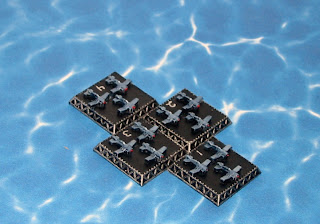 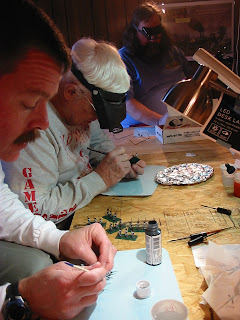 Last Saturday, November 12th, the HAWKs (Harford Area Weekly Kriegspielers)began work on their 2nd Annual Armies-For-Kids project. The purpose of the club's annual project is to give away free armies to kids, in an attempt to help grow the hobby. The initial project was launched last year, after the club received a sizable donation of unpainted 25mm American War of Independence figures from the Wally Simon estate, with the simple request that the club see the figures got into the hands of kids. The HAWKs then held several painting bees to paint the hundreds of donated figures. The results of last years project was the presentation of painted opposing armies, as well as a gift bag of terrain and playing aids, to 8 children who participated in specially designated kids games at Historicon '11. 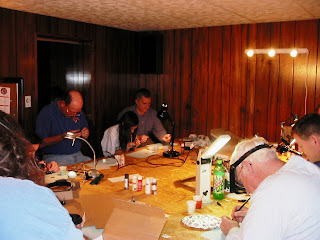 This year, the club is working on a Seven Years War project based on the generous donation of 15mm figures from Robert Piepenbrink, as well as the donations of additional SYW figures from Erik Engling, and Ed Mohrmann. The club has been aided this year by some financial donations from folks who generously gave the club money at Historicon, and the painting support of John Spiess, who offered to paint two of the giveaway armies for us.
Last Saturday, eleven members of the HAWKs got together to begin work on painting the armies for this year's giveaway. These armies will be presented to kids at Historicon 2012. 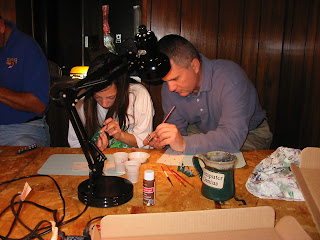 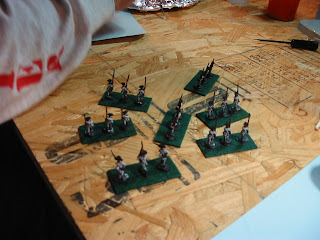 Posted by Chris Palmer at 9:19 AM No comments: