In the flea market at Barrage (our club's one-day gaming convention) a couple weeks ago, I found a pair of old Mage Knight figures called "Half-Troll Gorger".  The figure is of a large troll-ish creature taking a bite from a piece of meat it holds clenched in one of it's hands.  I noticed the piece of meat was shaped vaguely like a little person, with a head and an arm.  The spark immediately went off in my brain; that it would be a quick and easy conversion to cut off that piece of meat, and actually replace it with  10mm figure to make a cool new unit for my 10mm "Bear Yourselves Valiantly" armies.   For you 15mm gamers, I think a 15mm figure would do the trick nicely too.
So I took the pair of figures home, and began the process. I popped the figures from their clicky bases with an hobby knife, and then easily sliced the meat from their hands.  I then rummaged in my box of spare figures from my 10mm War of the Roses project, and found a couple suitable figures to chop up.  One was an archer, and the other a charging figure with wide spread legs. After cutting them down, I made sure they fitted nicely on top of the trolls' hands so the arm of one, and the leg of the other, lined up with the trolls' mouths. I then glued them in place with some super glue.
When the glue holding the half-figures had dried, I sprayed the trolls flat black, glued them to a BYV sized base, and repainted them.
I'm really pleased with how these turned out. I think they make a nice characterful stand of monsters for use with any evil army.

Reaper BONES CAV Kickstarter Enter Final Day and a Half

Just a heads that the Reaper CAV (10mm Big Stompy Mechs) Kickstarter is in it's last day and a half, and will end tomorrow.  Now's the time to jump in and take part, as the core set has grown to a very nice deal.  Or, if you're like me and the big mechs are't you thing, get in to the Kickstarter just for the great deal on the 10mm tanks and other vehicles.

You can check it out here
Posted by Chris Palmer at 8:39 AM No comments:

This past Saturday some of the HAWKs were invited up to run a couple games at Sam Fuson's Warhorse Farm in Gettysburg, PA as part of a farewell party for one of the fellows in Sam's unit who was moving on to another assignment.
We began the day with a large semi-historical WWII battle from the Polish campaign in September of 1939, run by Buck Surdu using "Look, Sarge, No Charts: WWII" rules.  In the battle Russian and German forces are converging on the Polish held town of Zboiska, while the Poles are tasked with clearing some German heavy artillery off a nearby ridge that is shelling the city of Lvov.  Historically, the Germans left the town for the Russians to take, and moved off to other objectives.  In our game, we pitted the Russians and Germans in a race to see who could capture the town first.

In the end, the Poles were able to gain the ridge and had captured some of the guns. The Germans and Russians had both been able to eventually punch through the Polish defenses with their armor and the tanks were nearing their objective, but most of their infantry had been beat up in the fight so the chances of either side taking the Polish-held town were slim.  The game was declared a Polish victory.

After a late lunch , Duncan Adams set up a WWI battle using a combo of modifed LSNC: WWII & ACW rules.  The battle was from the opening maneuvers of the Battle of the Marne.  The Germans were tasked with pushing counterattacking French forces back from a ridgeline that the Germans occupied.


In the end the French were able to push a small force onto the German held ridge on the French left, even though the French right had been badly mauled and was collapsing under repeated German attacks.  The game was called a marginal French victory.
Everyone had a great time, and it was a nice send-off for a friend.
Posted by Chris Palmer at 11:11 AM No comments:

The Reaper CAV Bones Kickstarter has only got a little over a week to go, so now is the time for anyone interested in Big Stompy Robots, or Sci-Fi gaming in general, to get in and be a part of it.

While not in it for the Mechs, I have gone in to this Kickstarter big time, to buy tanks and other vehicles in anticipation of working on the next installment of our "Look, Sarge, No Charts" series of rules, which will be for Sci-Fi mass combat. So, like me, even if you're not into the CAV rules, there are a lot of other uses for these cheap Mechs and vehicles.

Posted by Chris Palmer at 11:07 AM No comments:

"Bear Yourselves Valiantly" Battle of Barnet at Barrage XVIII

At last Saturday's BARRAGE XVIII, the HAWKs' one-day gaming con held in Havre De Grace, Maryland, I ran my War of the Roses, Battle of Barnet, game using our soon to be published "Bear Yourselves Valiantly" rules for Fantasy, Ancients and Medieval mass combat. (For more about the con see my previous post.)
The battle took place on April 14th, 1471.  The Yorkist King Edward tried to eliminate the threat posed to his throne by the Earl of Warwick and his allies.  The engagemnt to place on a very foggy morning, causing both side to form up for battle misaligned; both with a dangerously threatened flank.   For the game I had a full slate of 6 players, most of whom were new to the rules.  The armies were 10mm Pendraken figures.
The game proved to be a closely fought affair with neither side ever able to profit much from their overlapping flank advantage.
In the end though, the king and his Yorkist forces were able to manage a marginal victory over his Lancastrian opponents.
All the players said they enjoyed the game immensely.  And, they were able to virtually run the game themselves, with very little help from me, after a few turns of play.
The rules will be available from On Military Matters to coincide with the upcoming Fall-In gaming convention.

Posted by Chris Palmer at 10:03 AM No comments:

This past Saturday the HAWKs (Harford Area Weekly Kriegspielers) hosted their one-day gaming convention, BARRAGE XVIII.  The event, held at the Community Center in Havre De Grace, Maryland, was a huge success with record attendance and a full slate of beautiful games to choose from.
Here's some photos of the action.

For more pictures of the con see the HAWKs Blog.

After the con was over, the club celebrated by holding their first ever live-action wargame using the "Blood & Swash" Pirate skirmish rules.  A "tavern" was set up in the hall using the game tables, with drink coozies for beer mugs, and paper plates for dishes.  Armed with foam swords and Nerf guns, the Pirates tried to be the first to carry a treasure chest out of the tavern. The more dressed up in costume you were the better ranked your character got to be. Much hilarity ensued and all had a great time.  It was the perfect way to end the day.

Posted by Chris Palmer at 9:25 AM No comments:

"Bear Yourselves Valiantly" Rules Sent to the Publisher!

I just wanted to give everyone the latest update on our rules for Fantasy, Ancients and Medieval  mass combat, "Bear Yourselves Valiantly".  The rules were sent out to our publisher, On Military Matters, today and we are on track for our planned release of the rules to coincide with Fall-In; where we will be running several demo games!
Here is a sneak peek at the final cover: 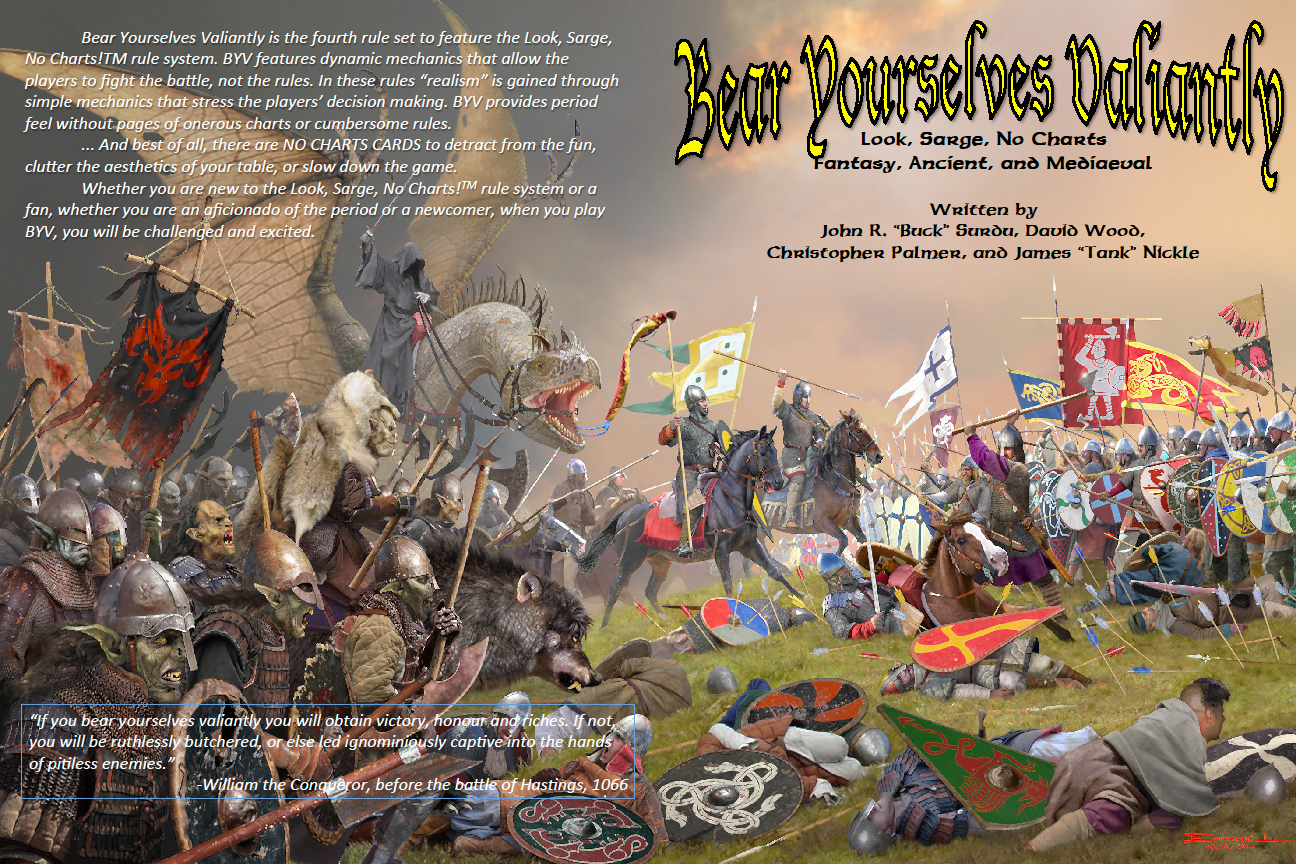 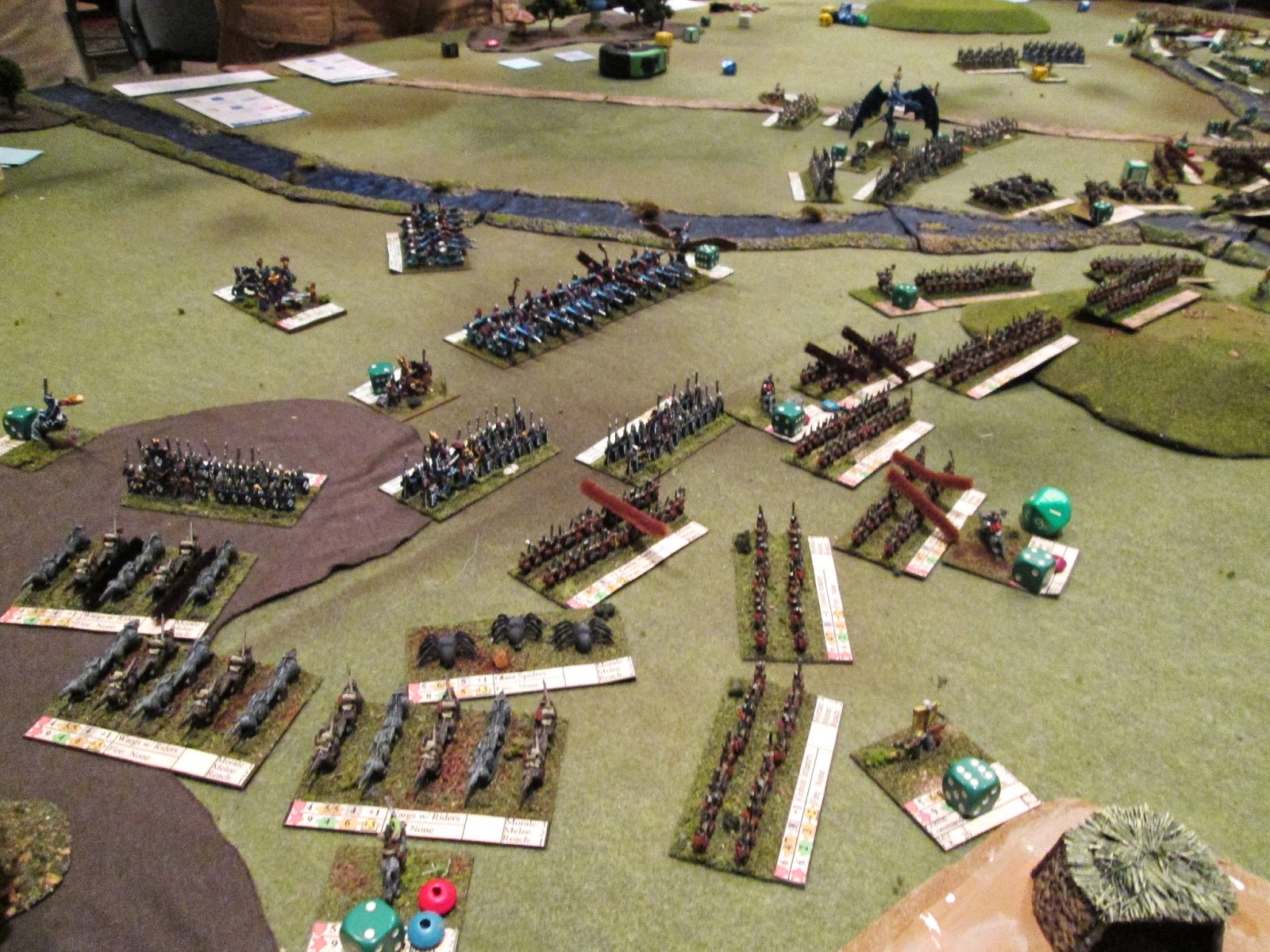 Posted by Chris Palmer at 10:10 AM No comments:

Those of you who read my blog will remember that a couple weeks ago I posted an article (Click Here)  about some nifty microphone shaped bubble-wands I found in the toy aisle while on a trip to the local Dollar Tree store.  I thought the tops had good possibility to be converted into some sort of sci-fi building for my upcoming 10mm sci-fi project.  Perhaps storage tanks, or a communications center of some kind 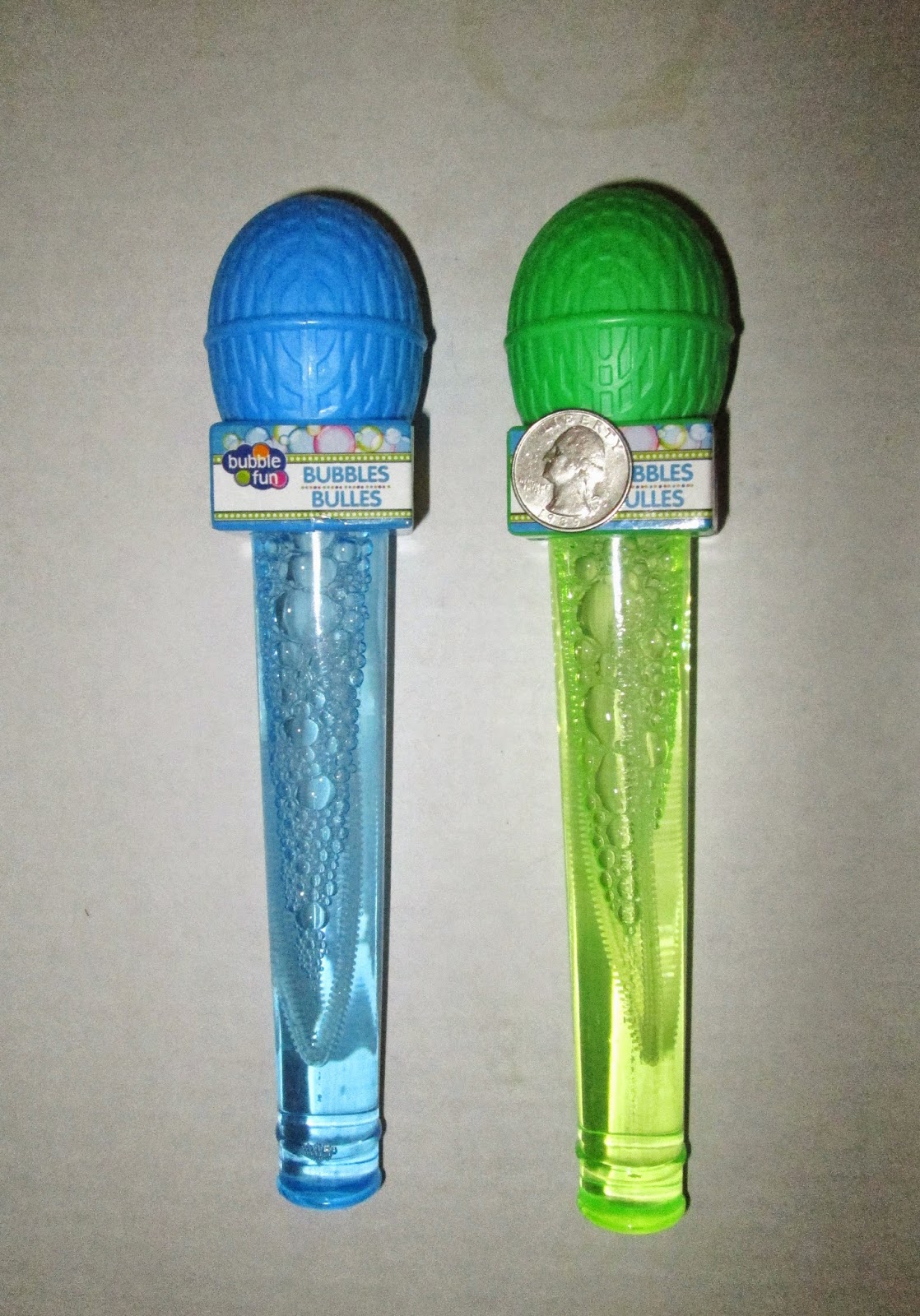 And, so I came up with these, seen in the photo below, which were the subject of the article I linked to above. When I shared these constructions on The Minaitures Page  someone asked if I had done anything with the handle parts.  I hadn't, and in fact had tossed them into the recycle bin, seeing only the tops as being useful. 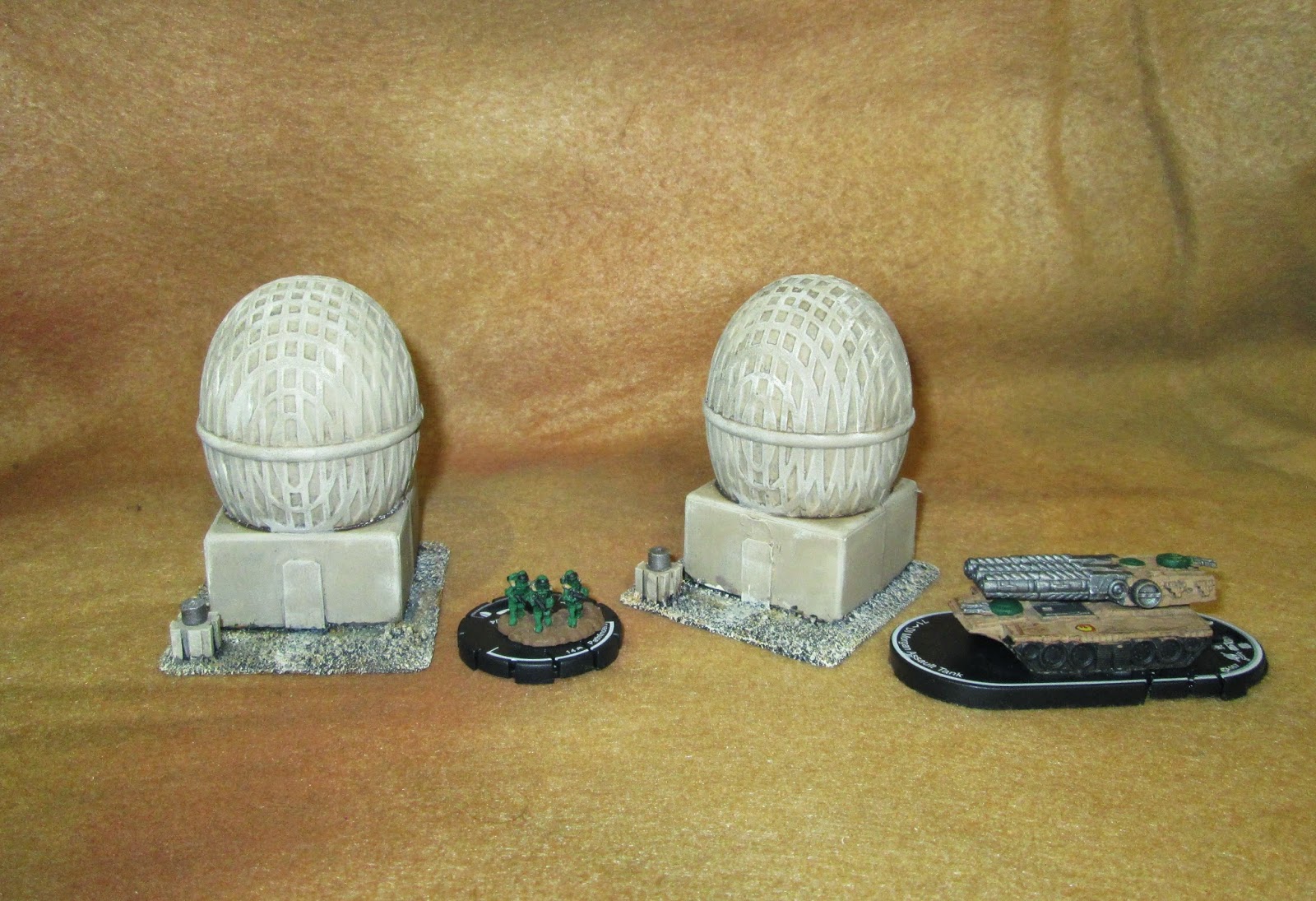 The question, though, became something of a challenge to me and was a bee in my bonnet. So, it wasn't long before I rescued the handles from the bin and pondered their usefulness. I immediately got the idea of some sort of towers.  So I sat down at my work table, and after a little cutting and gluing, came up with this: 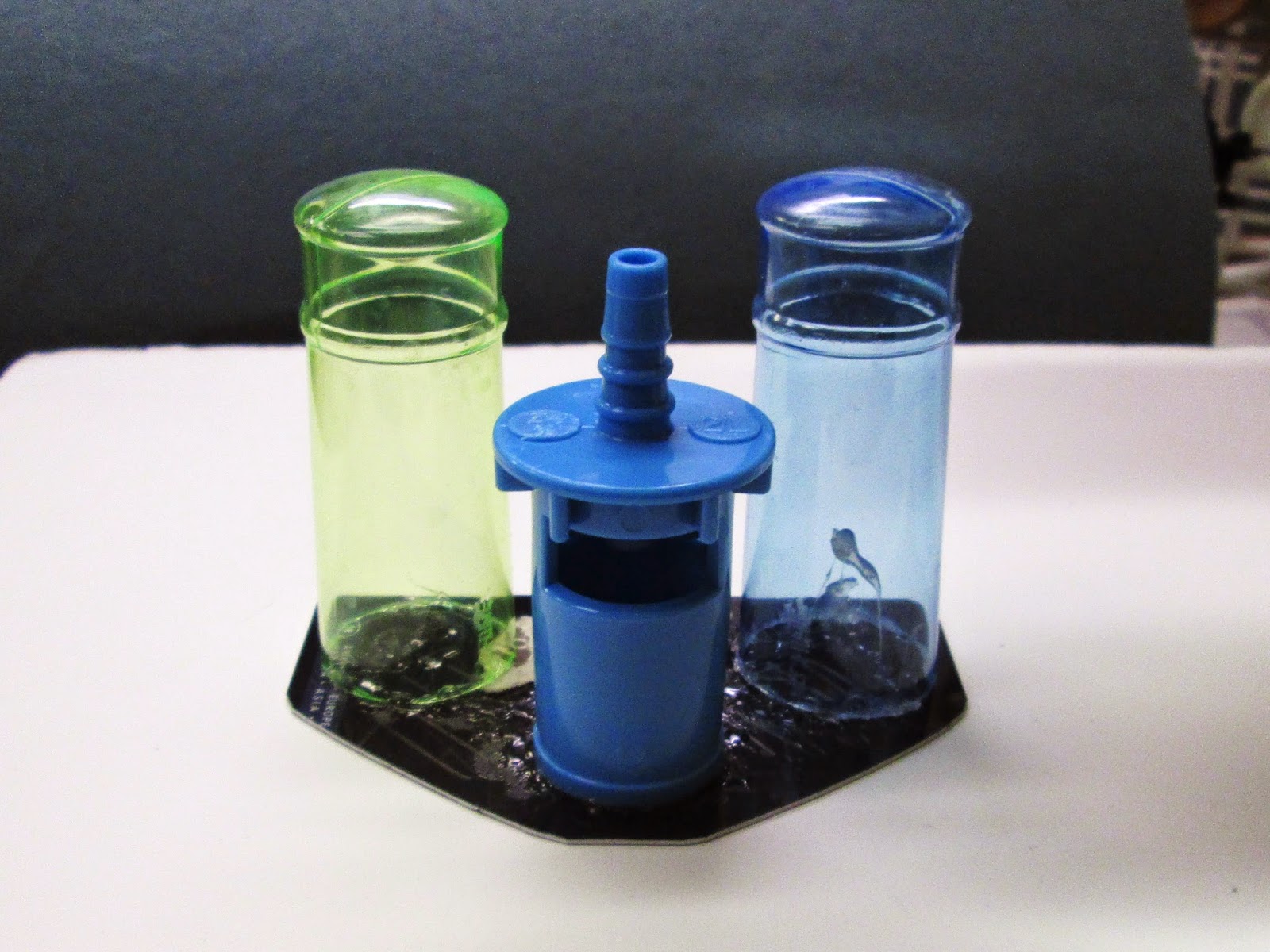 The central piece is a left over part from the oxygen apparatus when my Dad was in the hospital a few years ago, and it had been tossed into my parts bin.   I thought it would make a nice central unit for my two towers. 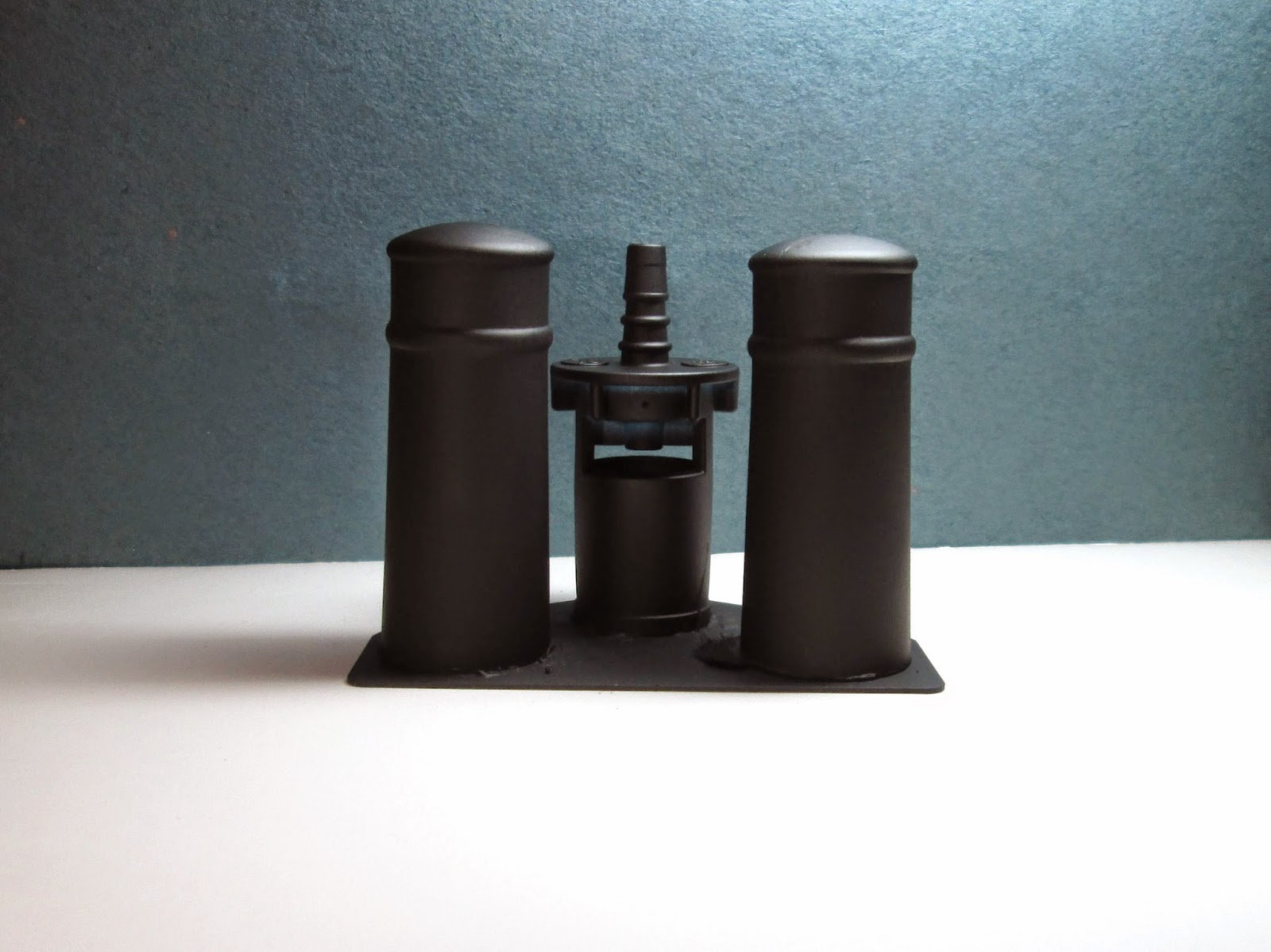 I think it turned out really nice, and am pleased with the addition to my 10mm Sci-Fi scenery. 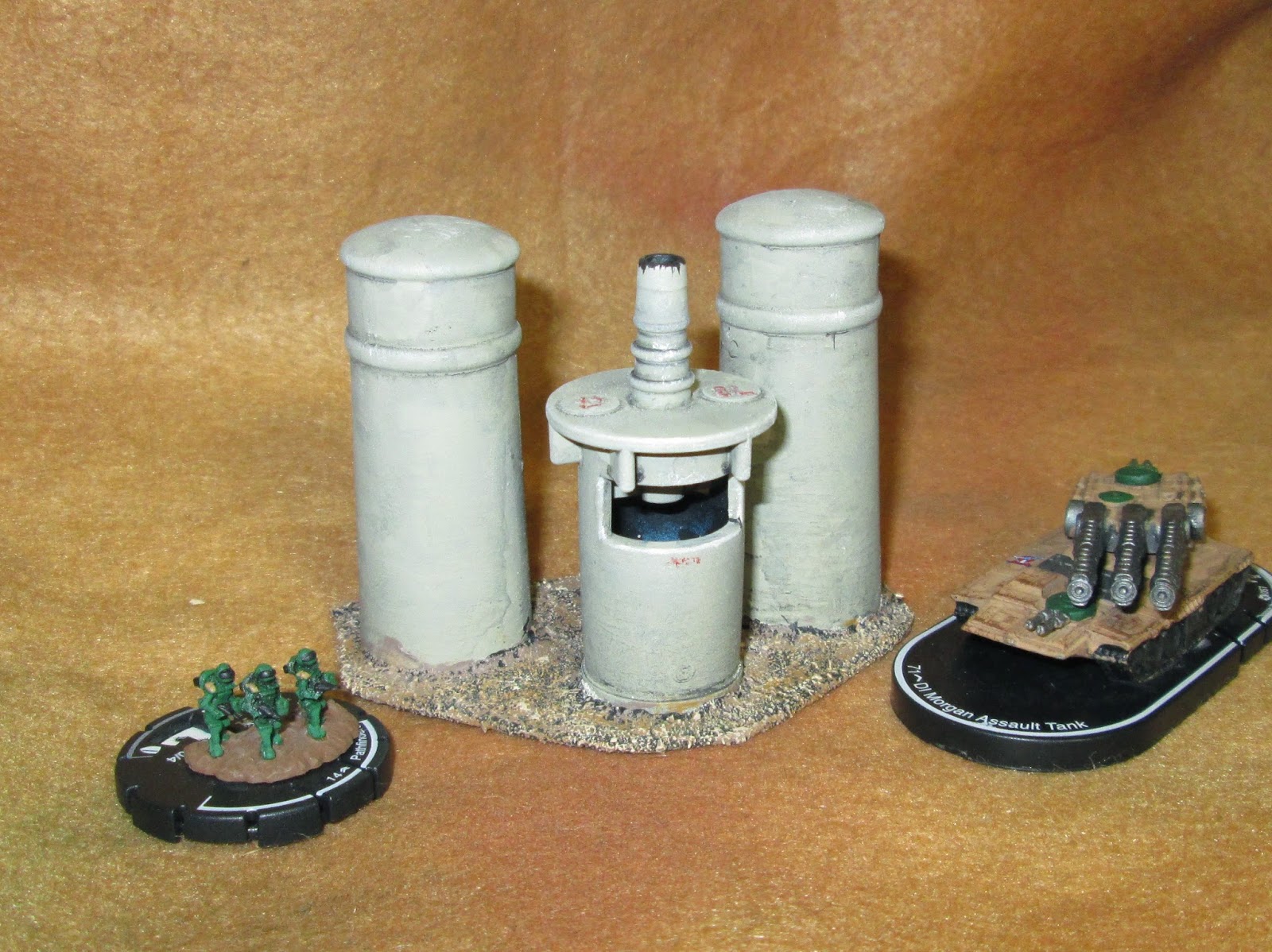 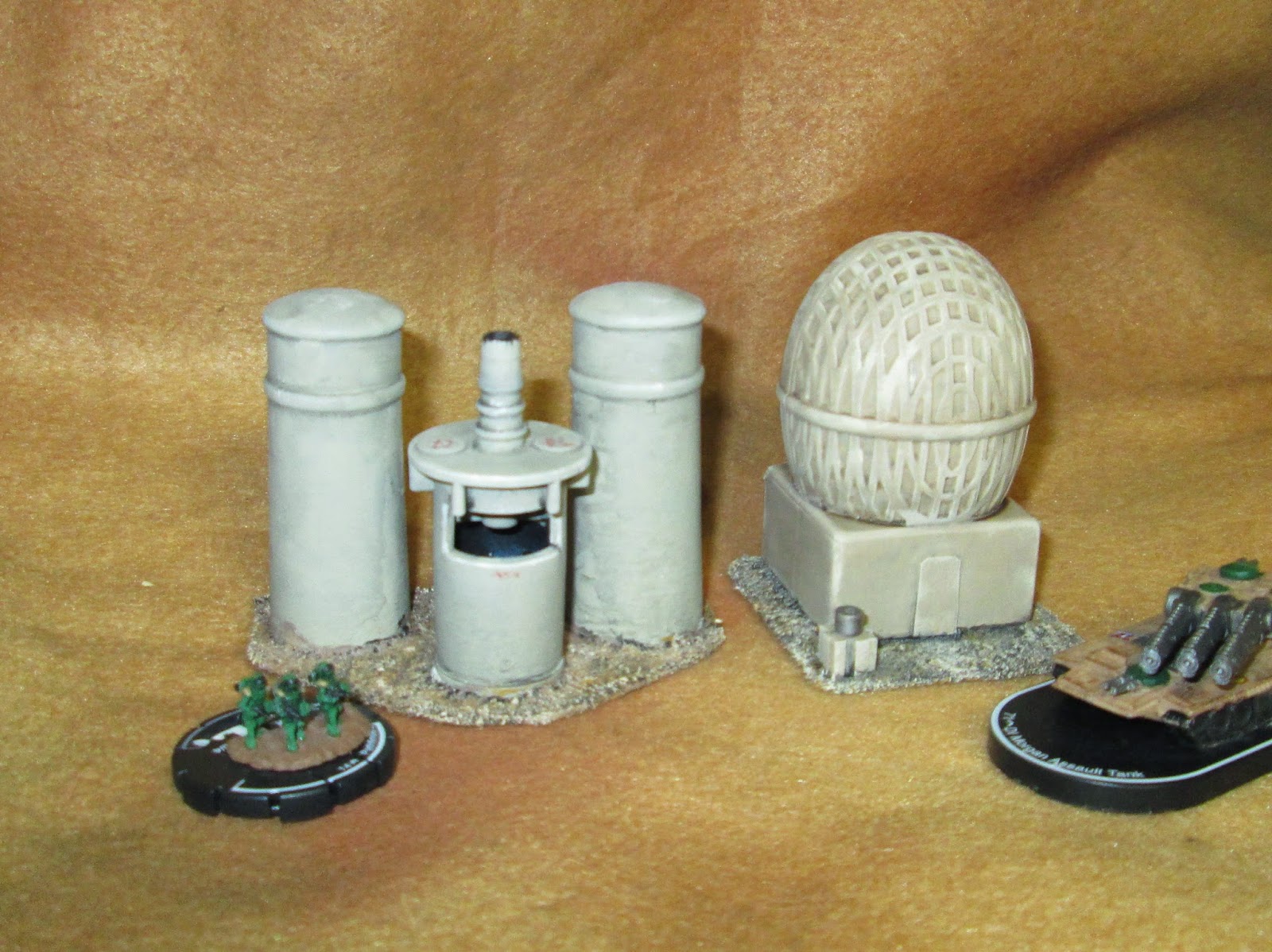 Posted by Chris Palmer at 9:10 AM No comments:

Readers of my blog may remember that last year I started a project to recreate in 10mm the 40mm Imagi-Nation forces of my North Polenburg country. See here for more on that.  The goal had been to create armies suitable for using with the "Look, Sarge, No Charts" family of rules.  I had hoped that more of my club-mates might join in and and do their Imagi-Nations in 10mm as well, but so far interest has been small, with only Buck Surdu participating in the project.  So, I realized I would need to build more forces on my own in order to have enough to play games with.
I therefore decided that I would start mirroring my North Polenburg armies with the creation of her counterpart, South Polenburg's, forces.  The logic being that South Polenburg could act as both an ally to her northern sister, or as a break-away enemy, depending on the needs of the game. 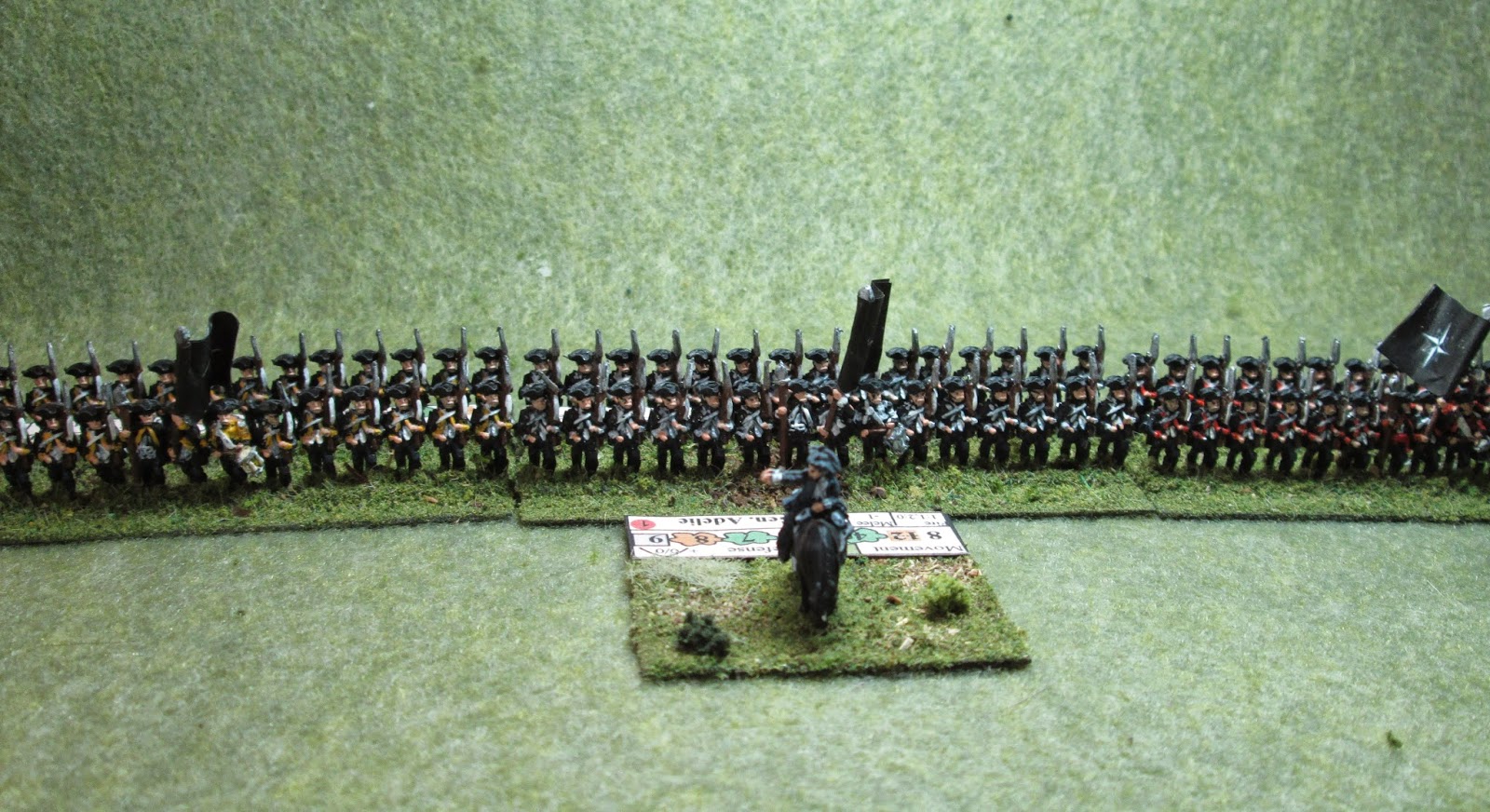 This week I completed the South Polenburg 1st Brigade.  When considering the theme I was going to use for this army, the obvious idea that hit me was to go with a South Pole motif; so the Infantry uniforms are penguin based, as are the unit and officer names. The artillery uniform resembles the color of sea elephants or walruses.  For the South Polenburg flags, I decided to use the negative image of the North Polenburg flag's star motif.
My plan is now to complete a second brigade so I ill have a full division, and paint a cavalry brigade as well.

Posted by Chris Palmer at 11:39 AM No comments: