The HAWKs(Harford Area Weekly Kriegspielers)held their annual one day regional convention "Barrage XV" last Saturday January 22, 2011. The convention was held in the cafeteria of Archbishop Curly High School in Baltimore. There was a near record turn out of gamemasters, vendors, and players and everyone had a great time. 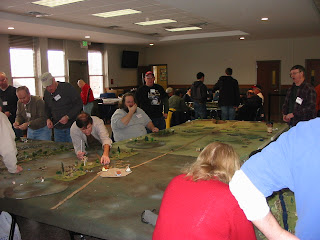 The large Look, Sarge, No Charts: WWII game Buck and I ran. The scenario depicts a hypothetical attempt by German and Russian forces to capture a town on the outskirts of Lvov in Poland '39 as the Poles try to destroy a German battery which is shelling Lvov.. 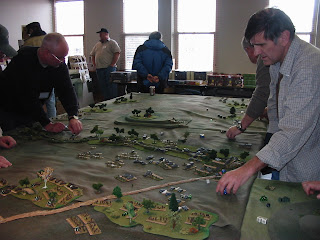 Another shot of our big Look, Sarge, No Charts game as German forces threaten the Poles' last line of defense. 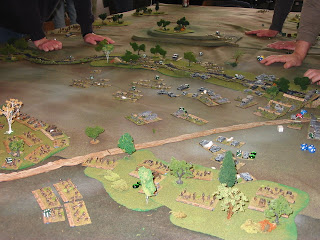 A closer shot of the Poles' position 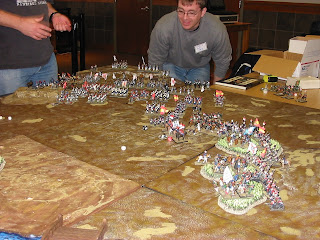 Scott Perry's Carlist War game. It was a great sight to see all these beautiful and rarely seem armies arrayed on the table 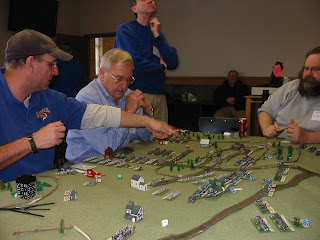 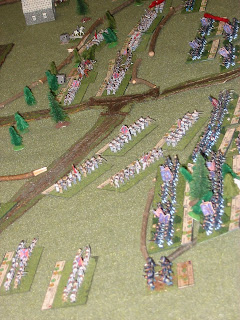 A closer shot of the Union and Confederate lines. 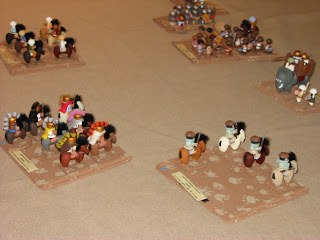 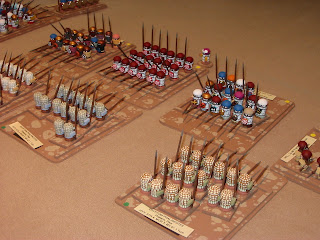 Another shot of Matt's beautiful home made ancients

Here's a video of some of the days events.

And here is a link to the Barrage website where you can see more photos from this year's convention: http://www.bucksurdu.com/Buck_Surdu/Barrage.html

My friend Buck and I were talking over the Christmas holiday and, both being fans of the book World War Z, we were discussing how it would be cool to do a zombie project, but neither of us felt we wanted to dive into such a project if it meant painting a couple hundred zombies. So we struck upon the idea of making it a club project where each member only had to paint 20 zombies and a small group of survivors. When we brought the idea to the club members we were met with an enthusiastic response. It seems we weren't the only ones interested in doing a zombie project but not in painting hundreds of zombies. We agreed to use the 28mm Wargames Factory zombies since they were reasonable priced and offered a lot of flexibility for variety of poses. We will probably adapt our GASLIGHT rules for the games.
I purchased a pack at the local brick and mortar game store and have begun to put them together and paint them. I'm finding it to be a lot of fun to find creative poses and as I build more I'm getting inspired to do more involved conversions. I had a couple sprues of the freebie Wargames Factory ancients that had been given out at some of the HMGS cons, and I Incorporated some of the parts from these into some of the zombies I made. I also found the zombies to be a pleasure to paint.
Here are some photos of my first attempts. These are the first ten that I have assembled and painted. I will post the next ten when they are finished. I've been enjoying them so much I may do anther twenty. Who knew making and painting zombies could be so infectious. :-) 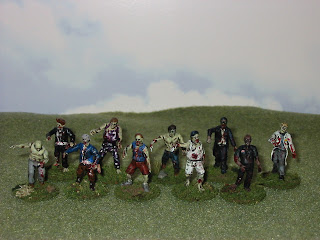 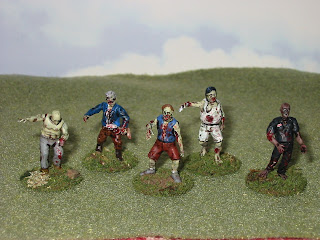 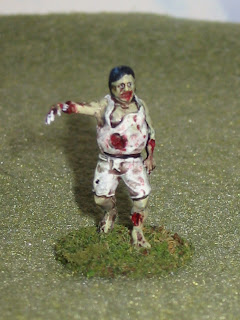 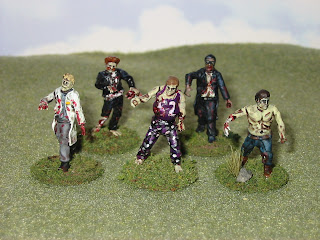 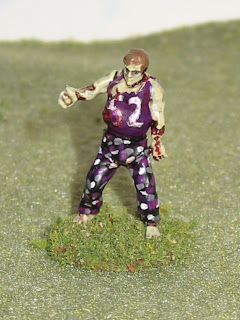 It has now become something of a tradition for the HAWKs, that Buck Surdu and his wife host a New Year's eve party and gaming day for the club on December 31st. This year we had two miniatures games and two card games while waiting for the ball to drop in Times Square. I volunteered to run one of the games, and brought the Father Christmas Letters battle that I had been working on (see previous blog entry). I ran the battle using our GASLIGHT rules. Buck ran a 1920's gangster game as the other miniatures game using our Blood & Swash rules. We finished out the night playing Munchkin and then Kung Fu. 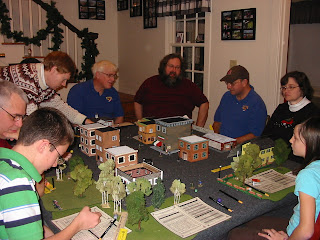 The small town of Granville, IL was the scene for this gangster battle pitting two rival mobs and the police against each other in a three way contest over stolen money, and a kidnapped Senator's daughter 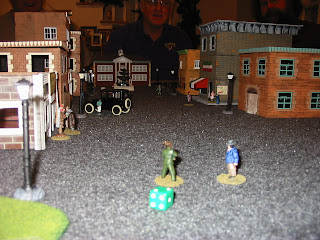 All seems quiet as my gang enters town. 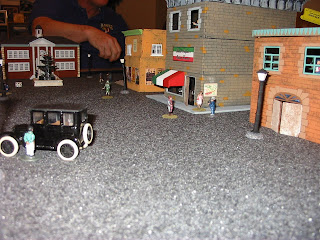 Another street scene, as innocent civilians stroll about, unaware of what is brewing in the back alleys. For more detail on this game see Buck Surdu's blog:
http://www.bucksurdu.com/blog/ 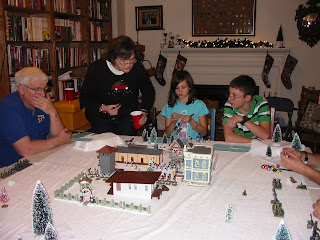 A view of the North Pole and Santa's compound as the battle begins. 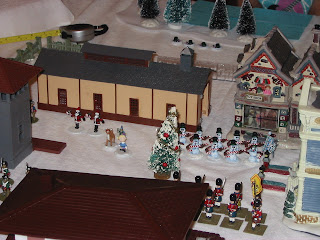 Some of the forces of good arrayed for battle. 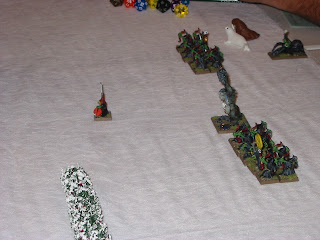 Some of the Goblin army bent on stealing Santa's presents and spoiling Christmas. 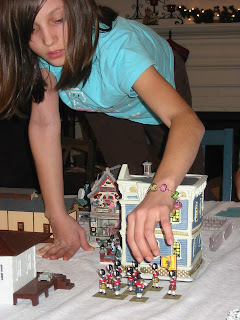 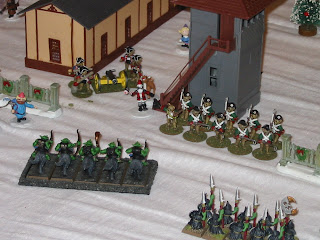 On the other side of the compound, the teddy bear battalion and cannon brace to receive a charge from Goblin cavalry and infantry. A clockwork Santa bomb wobbles up to explode on contact with the cavalry, as Yukon Cornelius and the Bumble move up in support on the left. 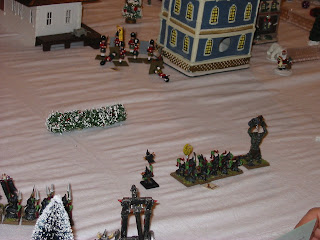 Goblin archers and their catapult and troll take their toll on the toy soldiers. In the upper right Santa and his friend Polar Bear move up to offer support. 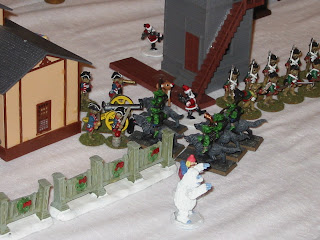 The teddy bear and cavalry battle continues and Rudolph joins in 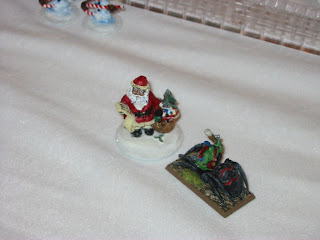 Santa battles a Goblin Hero on his spider mount and is killed by a freak Save roll of 20. In future games we may rule that whoever kills Santa has to put on his outfit and become the new Santa. 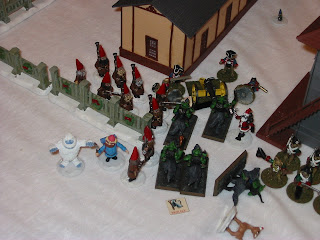 The North Pole Elf Militia (NPEM) moves up to support the teddy bears. Meanwhile, Rudolph has fallen to a goblin cavalryman's attack. 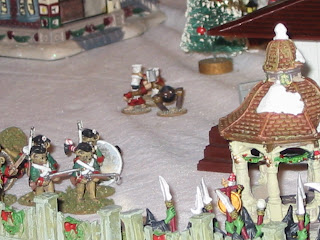 The elf cook's hot chocolate catapult moves up to support the beleaguered bears. 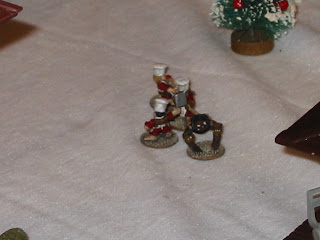 Close up of the Elf Cook's Hot Chocolate Catapult 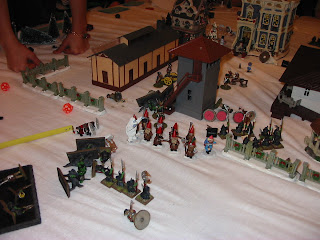 The carnage continues as the goblin cavalry is eliminated as is the bear cannon, and most of the bears. 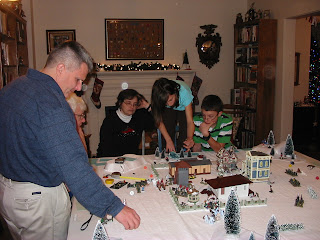 A view of the thick of the battle. 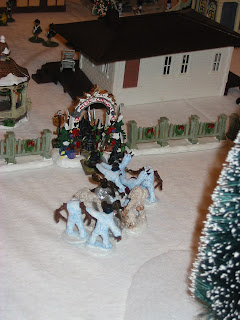 The end is near as goblin infantry and evil snowman poor though the undefended main entrance. In the end it was an overwhelming goblin victory. In retrospect it was decided I had set up the goblins too close to the compound so the North Pole Defenders had not had sufficient time to move into defensive positions before getting hit. We also felt that I had under rated the stats for the North Pole Characters.

Posted by Chris Palmer at 4:42 PM No comments: