This past Saturday I hosted the fifth game of our monthly Frostgrave Campaign.  We had all of our 7 players in attendance.   Since we had the whole gang, I set up the table in a 12' x3' configuration.  I put a river in the middle this time, and regular ruined city on each side.
To read an account of the previous game, please see Frostgrave Game 4.
For an account of how Kodak came to hire his new Apprentice see: The Tale of Leighlyndana
For the account of the following game, see: Game 6

We planned to incorporate two scenarios into the game; the first being a version of the treasure system from Cigar Box Battles' "The Diabolist's Scheme", where each player would put out a corpse marker instead of one of their treasures,  and when the corpse marker is touched the player rolls a d20 with the results being: 1-5 nothing, it's just a dead body; 6-10 it's a zombie that attacks the figure; and 11-20 it's a treasure.
We also did a dragon attack scenario of our own devising where picking up treasures has a chance to activate a dragon which will fly in over the city, with random entrance and exit points determined using a d30.  The dragon will fly in a straight path along this line and attack the first figure it reaches that falls within 3" of it's flight path.  While originally planning for just 2 dragons, it ended up that five of us brought dragons, so we decided right before the game started to use all five.  We used the stats for the Giant Worms from the rule book, and the associated experience reward for killing one of the dragons.   Each dragon would stay on the table until it ate somebody and satisfied it's hunger, and then it would fly off at the end of the next creature phase; or it was itself killed.  The system we used for determining when a dragon entered was a bit too generous (it was based on making a roll after each treasure was picked up) so that all five dragons ended up entering on turn two!  It did make for an exciting game.

After the game, we discussed how we wanted to eventually end the campaign and we decided we would play the current campaign until as a group we reach 150 levels. At that point whoever is the highest level will be declared the winner, and we will begin a new campaign with new warbands. Currently our combined level total is just over 70.


To read the Necromancer, Lingzhu's, account of the day, see: Dragon Strike!

To read the Druid, Knabe's, account of the action, see: Wargaming Notes
Posted by Chris Palmer at 6:53 AM No comments:

For those who regularly read my blog, you will know that recently in game 4 of our Frostgrave Campaign, my Apprentice Cherowyn was hit by a Bone Dart, and left for dead in the Frozen City.
I recently converted a figure to serve as the new apprentice, and painted it up this week.

Since the last outing into Frostgrave, Kodak had been searching for a replacement Apprentice.  Despite a number of tedious interviews with candidates who proved to not satisfy the old Elven wizard's requirements; as luck would have it, Kodak found his new student by chance.
On a routine trip to the nearest small town for supplies, Kodak stopped for a few moments to watch a young street wizard perform some tricks for a few passersby who had stopped to watch her perform.  There was something about the statuesque young woman with the flaming red hair and strange highland garb that caused the Illusionist to stand and watch a little longer than perhaps he would normally.  Despite her size, Kodak took note of her fair skin, long delicate fingers, and the hint of a pointed ear beneath her hair; "half-elf", he surmised to himself.  "That must be a story to hear", he though with a bemused smile. 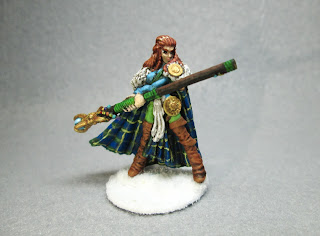 The crowd "Ooow'ed", and "Aaahhh'ed", as the highland half-elf made some living-flame dance in the air forming first a dragon, then  a mighty knight on his charger.  "She's got a bit of talent", Kodak thought to himself. Then, just as he was turning to go, he caught sight of a pair of shadowy figures lurking in the crowd behind the woman.  He stood a moment more to watch, as he saw one of the roguish pair eye the small brass dish that the performer had placed on the street for the spectators to toss coins in to.  She must have been really entertaining to this crowd, as he noticed a few Silvers in amongst the Copper.
Just then the thieves made their move, and as one pushed the magic-user from behind, throwing her off her balance, the other dashed forward and grabbed the brass dish; and with one swift movement stuffed it and its contents into an old stained sack.  Both then took off in opposite directions.  The first, who had pushed the girl down, didn't get far, as the half-elf quickly rolled and popped back to her  feet with the agility of a cat.  With a mighty thrust she hurled her magic staff at the back of the thief's head, where it made contact with a resounding thunk. The poor fellow went sprawling in the street. 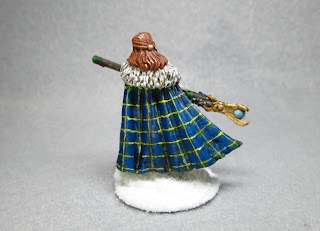 Meanwhile, the other thief had the misfortune to run right in the direction that Kodak was standing.   In a wink the old Illusionist disappeared and stuck out his now-invisible leg into the path of the racing criminal.  In a second he made contact with the wizard's foot and went airborne in a spectacular spiral, tumbling into the side of a rain bucket and getting soaked.
Kodak, visible again, walked up and grabbed the sack of coins from where it had landed.  He turned and walked back towards the red-headed girl. She had the other thief in an iron grip and was marching him towards the approaching guard captain; who was just coming up to see what all the ruckus had been.  Once free of her captive she turned, as Kodak caught up with her.
"Here, I think this is yours", he said as he held out the sack.
"Thank you" she said guardedly. "I was worried that one had got away."
" No, luckily I was standing right there where he ran." he said tilting his head back towards his shoulder in the direction of the soaking wet thief who was being rounded up by the town guard.   He added, "I'm Kodak the Illusionist, by the way",  and he extended his hand.
She took it hesitantly, and said, "I'm Leighlyndana"
Kodak said, "I was impressed with your show... and with how you handled your staff back there." He eyed the girl with an appraising look."  If it's not too forward, would you be interested in discussing a matter of business with me.  I have need for someone with talents like yours." 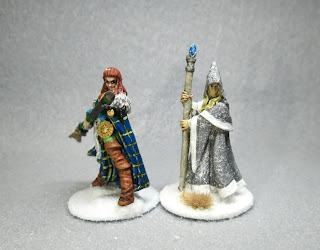 Leighlyndana stared at the old Elf wizard for a moment.  She was not use to a kindly tone from an older member of the magical community.  She had had some bad experiences with elder Elf wizards in her past, so she was almost ready to walk away. But there was something about the old Illusionist that seemed warm-hearted and trusting, so she nodded. Kodak pointed to a nearby pub, and the two headed there, Kodak leading the way, as the crowd on the street slowly dispersed and returned to their normal lives.

Over the past few months I have been slowly working on assembling a Santa-themed warband for Frostgrave that is headed by an Enchanter and his apprentice.  This week I finally finished the last figure for it, and while I have shown a few figures individually in the past, I thought I would present the whole complete group here today.
First up is the Enchanter wizard himself and his Apprentice, in the form of Santa and Mrs Claus: 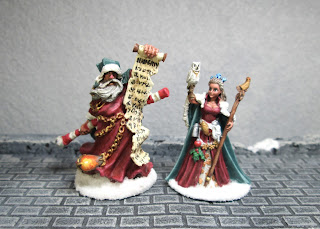 Next, up is the Treasure Hunter, and Marksman.  These rolls are filled by Yukon Cornelius (From the 60's Rudolph the Red Nosed Reindeer TV special), and Black-Powder Peter (from the Dutch Christmas folklore). 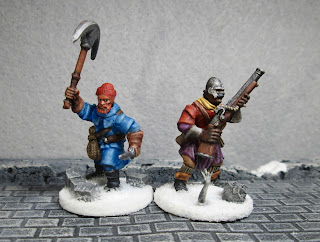 Following up is four Thieves, in the form of four of Santa's Elves from the North Pole's Gift Repossession Department. 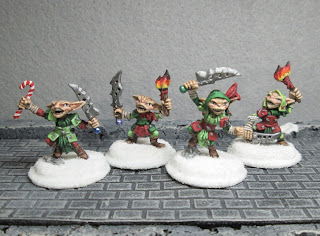 Lastly, we have a pair of Thugs named Blitzen and Donner.  Santa's reindeer need something to occupy themselves with when not flying the sled around. :) 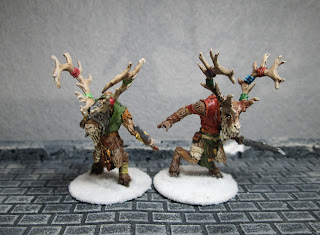 And here's the whole gang in one picture.  I'm really pleased with how this band came together, and look forward to getting a chance to try them out on the table. 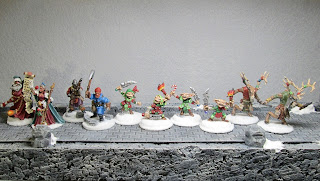