This past week my local Dollar Tree started putting their Halloween decorations on the shelves, and I grabbed one of their plastic skulls to make a skull-shaped rock terrain piece for Ghost Archipelago. 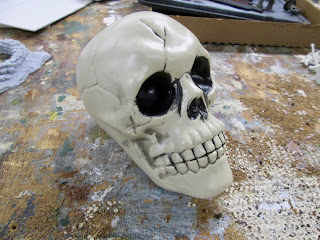 I began by slicing off part of the lower jaw at an angle, so the skull would sit more upright and less leaned back. 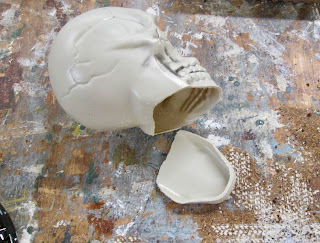 I then hot-glued it to a CD. 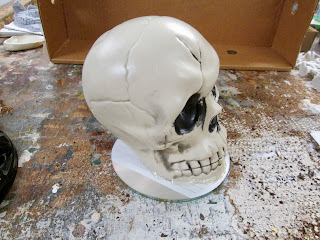 I also hot glued a bit of pink foam scrap under the back overhang so it wouldn't look quite so unbalanced. 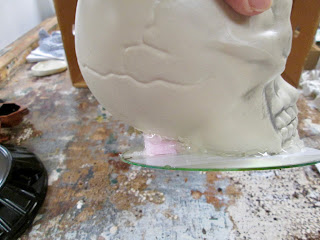 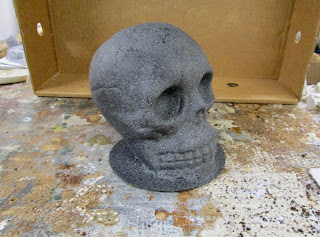 When the stone texture coat was dry,  I drybrushed the skull with various light grays.   When the drybrushing was dry, I used a little green stuff, some small twigs, and some spanish moss to make a little bird nest to sit in one of the eye sockets. 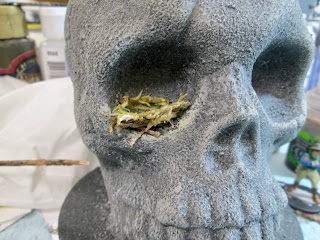 I then hot glued various plastic aquarium plants onto the base. 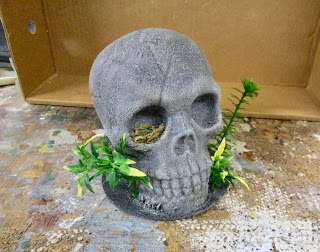 After that,  I flocked the base and added some more clump foliage and some grass tufts.    Finally, I sprayed it with some Testor's Dullcote matte spray paint. 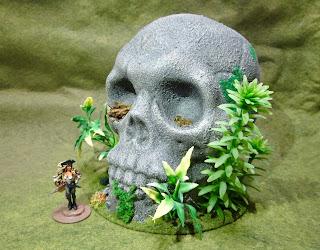 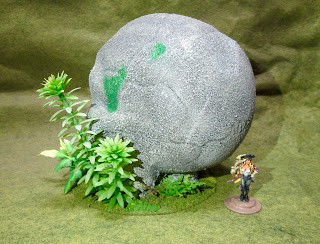 I'm very pleased with how this turned out!   I'm thinking I may like to make some smaller ones as well.
Posted by Chris Palmer at 2:58 PM 2 comments:

Only 5 Days Left For the Reaper "Bones 4" Kickstarter!

I just wanted to send my readers a reminder that there is only 5 days left to get your pledge in for the Reaper Bones 4 Kickstarter!  A great opportunity to get lots of great Fantasy and Sci-Fi minis at a really great price.
Check out all you get for $100.  Plus, there are a lot more add-on figure sets you can get.
Just click here to get all the details:  Reaper Bones 4 Kickstarter

Posted by Chris Palmer at 12:49 PM No comments:

My mom used to collect these old dime-store souvenir figurines of the the classic three wise monkeys from the Japanese fable. (See-No-Evil, Speak-No-Evil, and Hear-No Evil) .  She had them in metal, china, stone, wood; and in every size.  When she passed several years ago, I kept this one carved wood one because in the back of mind I always thought it would make a great primitive statue terrain piece.  Now, recently, with the impending release of the Ghost Archipelago rules; I finally had the impetus to set about making that idea happen.
The first thing I did was find a suitable large plastic base for the terrain piece.  The base had sharp right-angle edges, so I took a hobby knife and roughly cut the angle down so they were more sloped in appearance.  I then hot glued the statue to the plastic base. 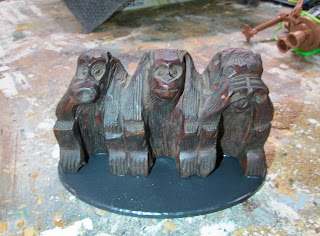 Next, I glued some small gravel and coarse sand around the base of the figurine.   Then, when that was dry, I sprayed the whole thing with flat black primer.  After that, it was just a mater of drybrushing everything with some grey tones.  I also decided I wanted a little dirt showing, so I glued some more coarse sand to the base, painted it dark brown, and then drybrushed that a series of lighter browns.
Lastly,  I glued on a whole bunch of various types of vegetation to make it look all jungle-y! 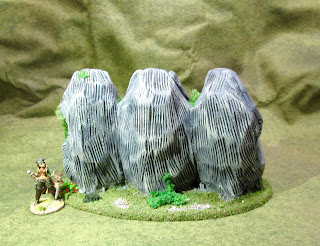 I'm pleased with how it turned out.  And what's best is that I now have a piece of terrain that will make me think of my mom when ever I use it. :)
Posted by Chris Palmer at 10:23 AM No comments:

Frostgrave Campaign '17, Game 8: The Lair of the Ghoul King & Queen

For Bemis' report on the game, see: Who Closed the Door?


To continue reading the Campaign reports with the next game, see:  The Dark Cauldrons
Posted by Chris Palmer at 10:47 AM No comments:

Reaper's Bones 4 Kickstarter launched yesterday, and a lot of Stretch Goals have already been smashed!  Be sure to check it out and pledge early and pledge often!
Direct link: https://www.kickstarter.com/projects/1513061270/reaper-miniatures-bones-4-mr-bones-epic-adventure

Posted by Chris Palmer at 8:24 AM No comments: