Last week the "Look,Sarge, No Charts" author team of Buck Surdu, Dave Wood, and myself got together, along with Buck's son Tom, to begin work on "Look,Sarge, No Charts: Fantasy, Ancients & Medievals", or as we call it, LSNC: FAN.   Buck is in the final stages of writing LSNC: Napoleonics, so we thought it was time to start some conversation and lead-pushing for our next LSNC volume.

We have been slowly gathering 10 mm Fantasy armies over the past couple years, and it was great to finally have a chance to put them out on the table.  Some of the new facets of these rules that we wanted to look at in a playtest environment were flying units, and magic.   Also new is a point system that Buck is developing that will allow players to purchase troops to build armies of similar values. This will be useful for scenario design,  friendly pick-up games, and more competitive style play.


In this session each of the four of us commanded a force of about 1000 pts.  Each base represents roughly 500 human-sized infantry, or 250 cavalry, or 2 -5 monsters or artillery pieces.   We also had bases representing magic users and their acolytes, as well as Hero bases, and leaders.


The game was a lot of fun,and visually looked great.  We uncovered some issues that we will need to work on, and we are looking forward to future playtests to move these rules along.  We will probably be in a position to start public playtests at Cold Wars '13.


Posted by Chris Palmer at 4:00 PM No comments:

For those who haven't heard yet, Reaper is offering a great deal on KickStarter in which you can get over 200 of their Bones miniatures for a pledge of only $100.  That is less than .50 cents per figure. 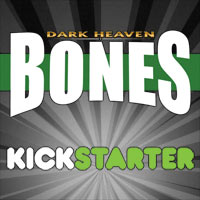 Plus, they have all kinds of cool extras you can add in for a small extra charge.  When I last checked the project had surpassed 9000 backers , and the total pledge amount was nearing $1,800,000.
Here is a look at what your $100 dollars currently gets you (click on the picture to see it larger):

They are adding more to this grouping as further Stretch Goals are made. Don't miss out on this once in a lifetime chance to get all these great minis for such a small price.  I pledged in at the $100 level and am looking forward to getting my package full of minis!

Here's the link:
http://www.kickstarter.com/projects/1513061270/reaper-miniatures-bones-an-evolution-of-gaming-min
Posted by Chris Palmer at 12:08 PM No comments:

I saw this group mentioned on The Miniatures Page, and I thought I would share their videos here as well.  A group of history teachers has got together and put history lessons to pop music creating some very clever and educational videos.  Be sure to check some of these out.
Here are two of my favorites-
The French Revolution:


The Battle of Agincourt:

Here is a link to their whole list of videos:
http://www.youtube.com/user/historyteachers/videos?sort=dd&view=0&page=1
Posted by Chris Palmer at 8:15 PM No comments:

Make sure 15 September is reserved on your calendar for Barrage XVI!!!

Barrage is a tremendous gaming day, sponsored by the Harford Area Weekly Kriegspielers (HAWKs). You know the HAWKS from our reputation for running many, quality games at various HMGS conventions. 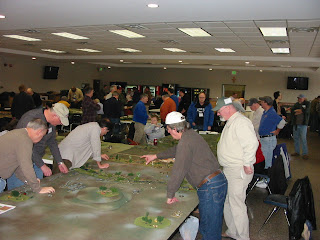 We've just added several new events to the Barrage event listing. We've also updates the list of vendors who are coming, including On Military Matters and Age of Glory.
Take a look at our website  for the most up-to-date event listing:
http://www.bucksurdu.com/Buck_Surdu/Barrage.html
Also note that we have a table dedicated to kids' games all day! 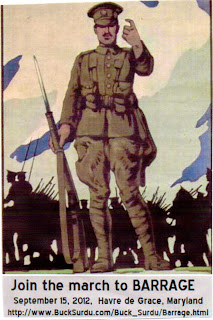 Come and spend a day of gaming. Bring a friend or several friends. Check out our new, roomier venue. We now have room to grow in future years. Pre-register and save some money (that you can spend with one of our fine dealers). After all, money saved on registration is more lead you can take home!
We have a wide variety of games in various scales and periods. There is something on the schedule for everyone.
We hope to see you there!
Posted by Chris Palmer at 6:10 PM No comments:

This past Saturday several members of our club got together at my game room to play a couple games. The first game we played was an Imagi-nation game, or as we call it in the club,  Not Quite the Seven Years War, or NQSYW. Rob Dean (who GM-ed the game) and I started this project over a decade ago, creating 18th century armies using 40 mm semi-round figures we made from home-cast Prince August molds. Though my participation waned over the years, Rob has been constantly keeping the project alive. He has been running games at many of the HMGS East cons using the armies he, I, and some other of the club members built.

My armies are from the Imagi-nation of North Polenburg, and Rob's are from Schoeffen-Buschhagen, two small countries who share an oft-contested border. The other club members who have participated have built units from their own individual nations.
In the battle we fought this day, my armies, consisting of two infantry regiments, a cavalry regiment, and two batteries of artillery, were brigaded with an allied regiment from Hesse-Hattenstadt, into a "Northern Coalition" brigade. We faced off against an assortment of units formed into the "Pragmatic Alliance"; the largest contingent of which was from the nation of Wachovia. It was the first time I had got to command my armies in person in what must be a decade, and so I got my RennFest pirate hat out of the closet and wore it as my North Poleburg general's hat in honor of the event. The game was a great deal of fun, and this was helped by my troops winning a decisive victory over the enemy, with the help of the brothers, Generals Schlegel and General Schlegel, as well as General Nickel.
We used the vintage rule set "Charge!" which really has the perfect feel for this type of game using large toy soldier type figures. The scenario involved a contested bridge, with whoever controlled the bridge at the end of the game being determined the victor


After the NQSYW game, we set up an Uncharted Seas battle that was part of the club's ongoing U.S. campaign.  In this game the Elves where trying to drive off some Human invaders.  The battle consisted of two Elven fleets and two Human fleets.  Each side rolled a d6 for islands and we ended up with 12! The players then took turns deploying the islands anywhere on the table.  This game was fun as both sides jockeyed for position around the islands.  In the end the Elves were deemed the victors, but the battle was bloody for both sides.

Posted by Chris Palmer at 12:48 PM No comments: