This week I completed my first base of Lizardman cavalry, and a Lizardman Cavalry Leader,  for my 10mm Lizardman Armies for "Bear Yourselves Valiantly" mass combat fantasy rules.  The figures are from Pendraken. 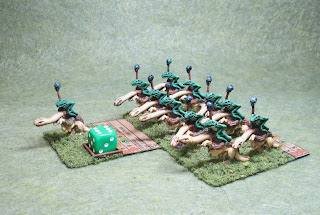 This was also the first chance I had had to try using one of the new Minibits dice frames, some of us had recently ordered, on the command stand.  I think I like the look of it, and they will really help players keep their command dice with the proper stands, as often they are left behind on the table when players move their units.

Posted by Chris Palmer at 12:21 PM No comments:

This past weekend a group of the HAWKs headed up to South Portland, Maine to attend the HUZZAH! gaming convention.   For the past few years the HAWKs Expeditionary Force has tried to attend a regional con, within a day's drive of our base in central Maryland, to expose our games and rules to folks who don't often get to play in our games at the HMGS-East conventions we usually attend.  In the past we have all headed to the con in one vehicle; but this year, due to a number of folks combining the trip north with personal vacations or other business, we ended up for the most part travelling separately.   As the only two members who were just heading up for  the three days of the con, Eric Schlegel and I shared a ride up.  It took us 9 hours to make the trip from Maryland to Maine, and we rolled in to the hotel around 4:00 PM Thursday afternoon.

This past weekend, the HAWKs once again got together to work on painting figures for this year's 40mm ACW Armies-For-Kids project.   We are closing in on having all the figures necessary finished up.  And just in time, with Historicon only a couple months away. 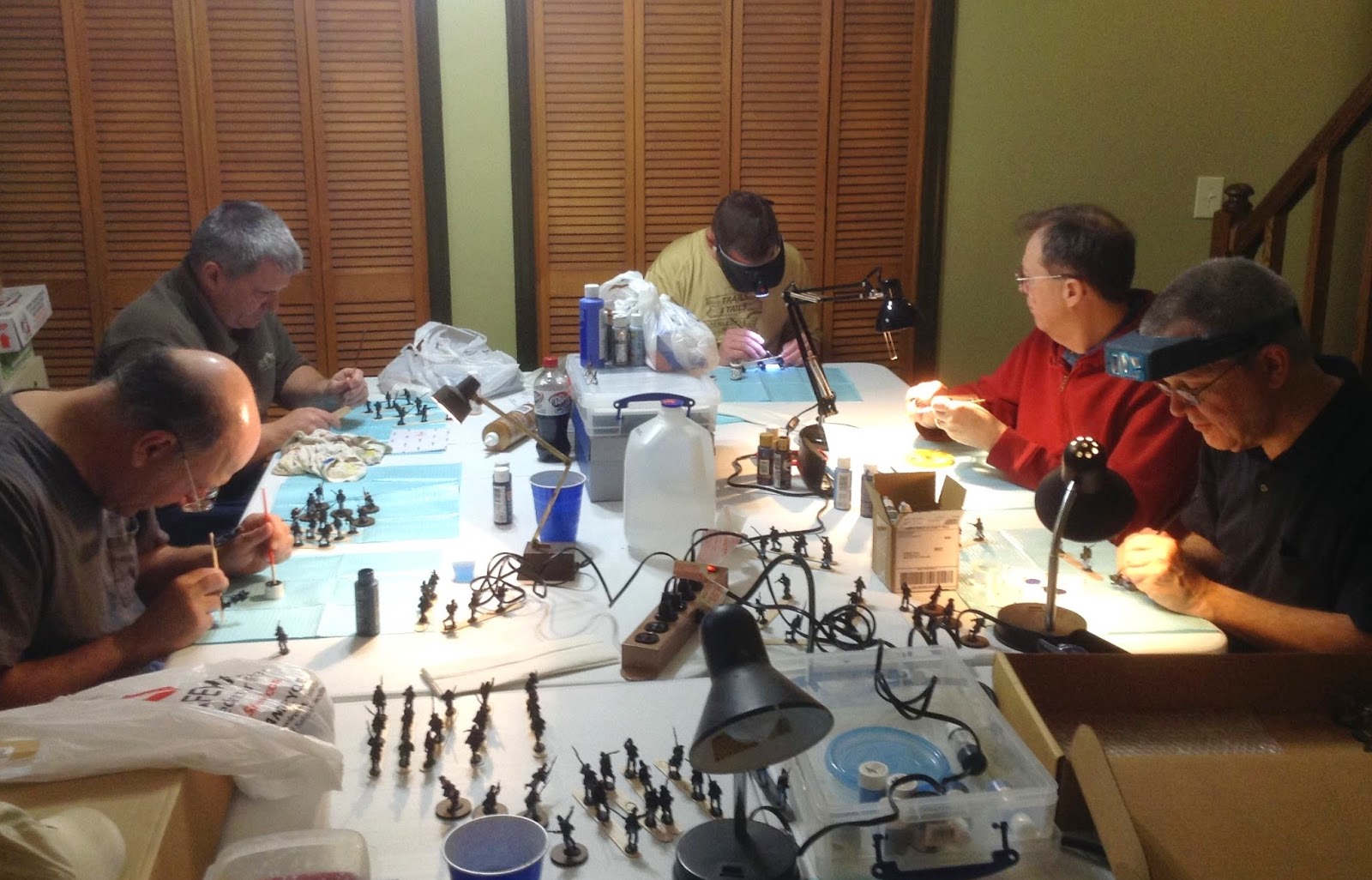 This year the figures were donated by Maynard Creel,  Ed Mohrman, Keven Pinder, and Phil Kearnan.  Phil, also painted a large number of the ones donated by Ed Mohrmann. 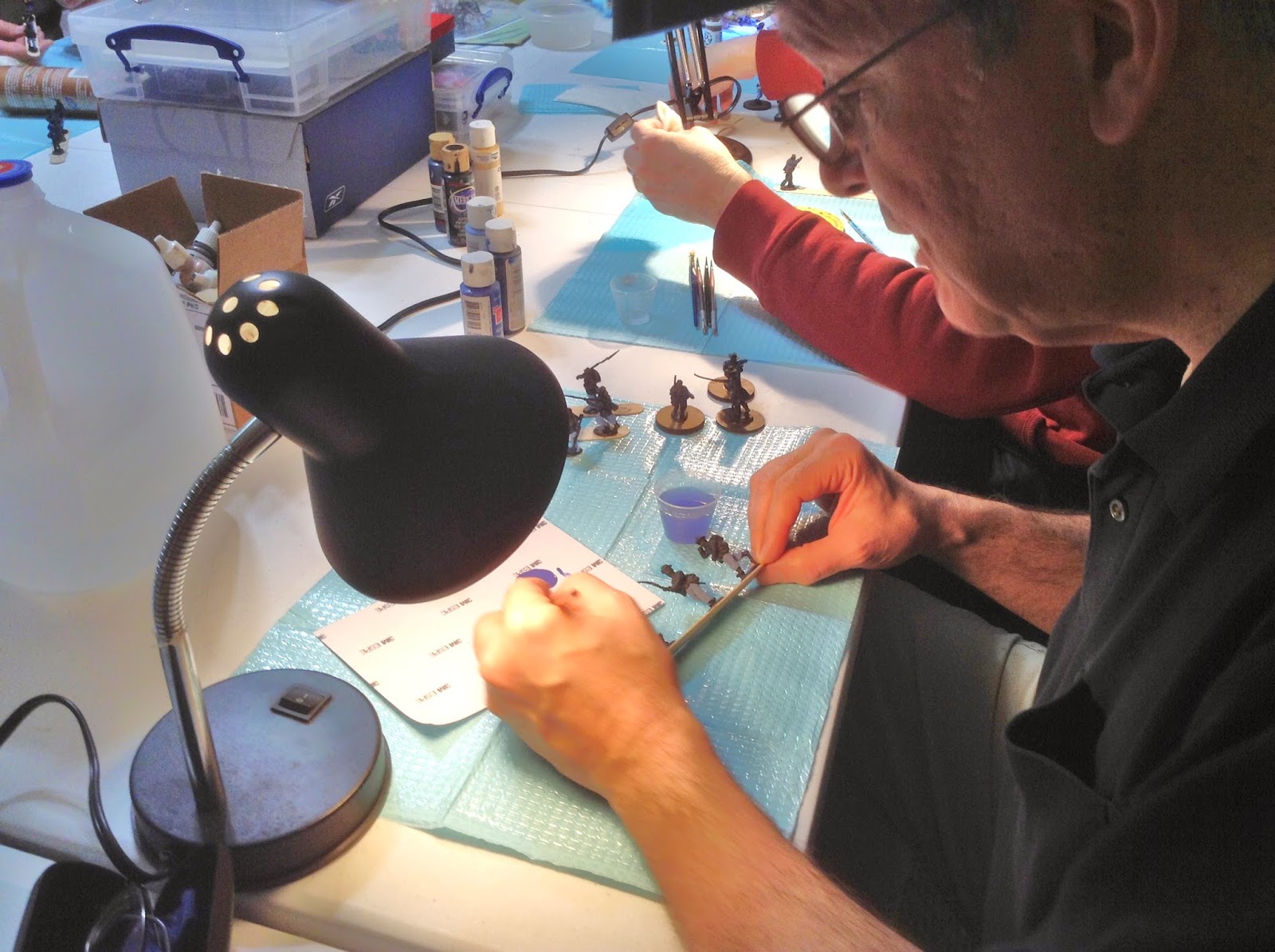 After we had spent the morning painting, we set up a game for the afternoon.  We decided to try using Buck Surdu's under-development G.A.M.E.R. skirmish rules with Buck's and my Sci-Fi figure collections; including ones from the Reaper Bones I Kickstarter, that we had both recently painted.
It was a real mish-mash of figures with our Reaper Bones (NOVA Corp and IMEF Force0, Buck's Colonial Marines, and my Void 1.1 stuff.   I was teamed up with Eric, and Buck was teamed with Dave.  While we had a tank for support, Dave and Buck's side had some anti-tank weapons.  We threw some terrain on the table, creating a sort of small industrial compound for us to fight over, and got to it.
At first our tank dominated the battlefield doing serious damage to Buck's forces, but he was eventually able to manuver his anti-tank soldier into a position where she could get a bead on Eric's vehicle.  After a couple misses, she finally scored a hit and destroyed the vehicle.
With the tank gone, Eric and I began to take heavy fire, and our squads were becoming badly worn down.  Fierce fighting broke out in the compound.  It looked bad for us, just as Duncan arrived with a reinforcing unit, and I was able to maneuver a small group onto Dave's flank. These two factors turned the tide back in our favor.
In the end, Eric, Duncan, and I held the compound, and Dave and Buck did not have the remaining strength to dislodge us.  It was a fun little battle, with some fiercely tense firefights.

Posted by Chris Palmer at 3:33 PM No comments: