Eureka "Corpse & Musket" Bridge For Use on Venus

At Historicon this past Summer I bought one of the sets from Eureka Miniatures' new Corpse & Musket Range that contained "Napoleon Blownaparte" and several zombified Revolutionary French soldiers, as well as a zombified Arcola bridge. (You can see this set in this TMP news item, http://theminiaturespage.com/news/504825/ I couldn't find it on the Eureka site.)
The bridge, which is all draped with vines, and growth, and slime, struck me as having potential to be (beyond a gateway for the dead) a nifty jungle terrain piece. I immediately saw potential use for it in both my Venusian project, and Buck's and my Frog Wars project.
The bridge comes in three pieces: a resin deck, and two metal rails. I encountered only a couple problems in assembly. First, some of the holes for the railings' pegs needed to be drilled out on the deck; and secondly, the bridge when assembled sits almost flush with the table top. This wouldn't work for me as I planned to use it with my Miniature World Maker latex rivers, which sit at least a quarter inch high on the table. To solve this problem I cut a pair of riverbank risers out of foamcore to glue to each end of the bridge allowing it to pass nicely over the river.
Once assembled, I sprayed the bridge with black primer. I then dry brushed the bridge decking and rails a mottled assortment of greys, tans, and grey-greens. Then I painted some of the larger vines with dark green. My next step was to pick out an assortment of green shades and working from darkest to lightest, I dryburshed them here and there where ever vegetation was sculpted into the bridge. Finally i picked out some details in the vegetation sculpting with reds and oranges to give some color interest. After that I glued the bridge to the two foamcore risers, and spackled the foamcore, sprinkling some sand on the wet spackle, to give it some texture and help blend it into the bridge. I painted the risers brown and then drybrushed a dirt path on them. Lastly I flocked the foamcore and glued on an assortment of plastic foliage.
The end result is shown below from four different angles. I have posed two Kroot/parrotmen on the bridge to give a sense of scale. 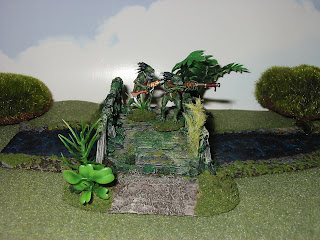 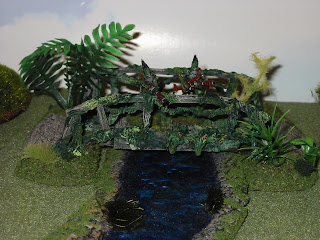 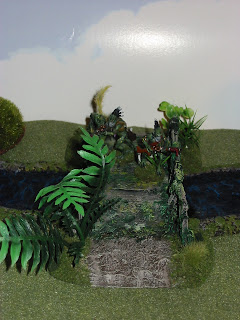 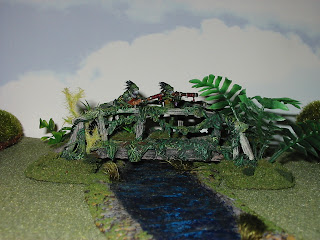