The Surdu's hosted their annual HAWKs New Year's Eve party and gaming night last night. Besides the great food and the great company, the highlights of the evening were a Christmas War game that I ran and a Pulp era game Buck ran, both using GASLIGHT rules.
My Christmas War game was a follow up scenario to last year's game (See my 2011 January blog entry for more details)which was loosely based on Tolkien's "The Father Christmas Letters" book. That scenario pitted nasty goblins trying to steal presents from Santa's compound against the brave defenders at the North Pole. The outcome of that game was a sound victory for the goblins. This year, the goblins were back for more, this time hitting Santa's toy production facilities, and the associated rail line, in the hopes of stealing more presents. 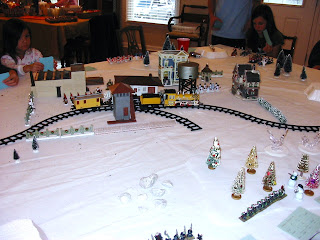 here is an overview of the set-up. The presents were located in the hopper car of the train, on the train station platform, and the loading dock of the toy factory. 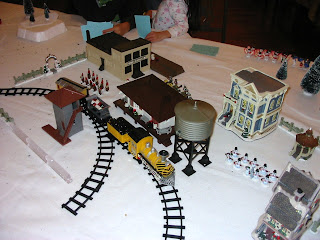 At the start of the battle the North Pole defenders had only a unit of Elf Militia, Teddy Bears and their cannon, and a unit of Snowmen along with Santa and Polar Bear at the compound. Santa had with him a clockwork "elf-bomb" that when triggered and set on the ground would walk four inches in a straight line each turn until it contacted something and detonated. On call were Moonracer's Marauders (a para-drop unit of misfit toys) and winged snowmen (a unit of drop infantry) Rushing to aid these defenders were more units entering from the far table edge. 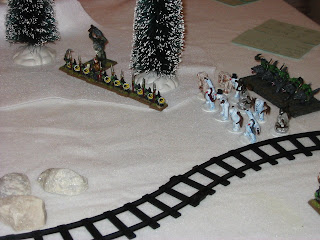 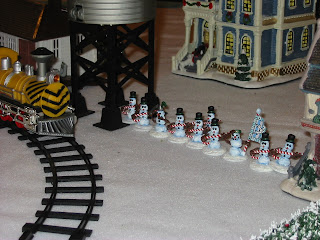 As the game began the North Pole Defenders, including this Snowman unit on the left flank, moved forward to engage the approaching enemy. 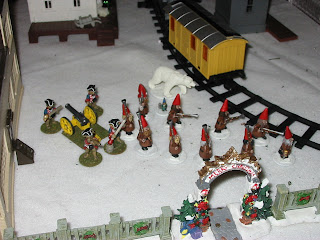 In the center, the Elf Militia, Teddy Bear Cannon, and Polar Bear move into position behind a nearby fence. 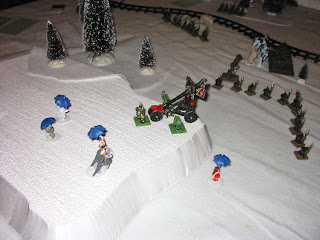 Meanwhile, Moonracer's Marauders drop in behind the goblin catapult, taking the crew by surprise and wiping them out. 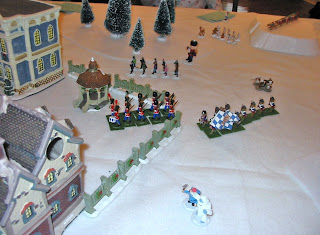 The column of reinforcements, including Toy Soldiers, Snowball-throwing Kids, a unit of Gingerbread-men, more Teddy Bears, a Giant clockwork Nutcracker, two Clockwork Santas and Yukon Cornelius, Hermie, Rudolph and the Bumble reaches the outskirts of the compound 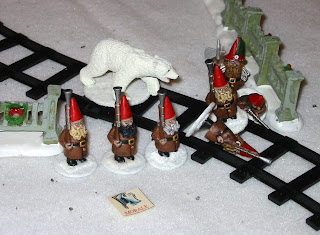 A unit of goblin wolf-rider archers take their toll on the Elf Militia. 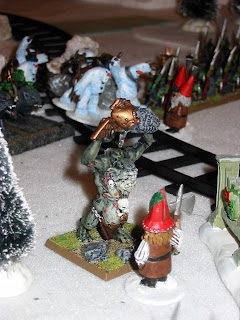 The broken remains of the Elf Militia try to stem the tide as the goblin horde and their evil snowmen allies come crashing into the compound. 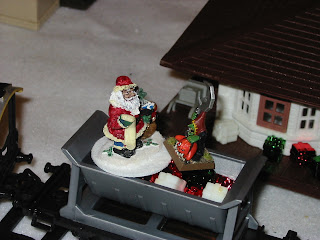 The goblins had formulated a plan in which their chief was going to unhitch the part of the train containing the present car from the engine and use the troll to pull it away down the tracks. The goblin chief climbed up on the car to do this but was met by Santa coming up from the other side. Several rounds of close combat followed, but Santa eventually fell to the goblin. I gave Santa a chance to trigger the elf-bomb he was carrying in a desperate measure, as he took his last breath, by rolling less than half his Save number. He failed, and the bomb fell harmlessly into the hopper car as Santa's body magically vaporised in a whirl of glitter. The goblin chief turned back to the task of unhitching the car. 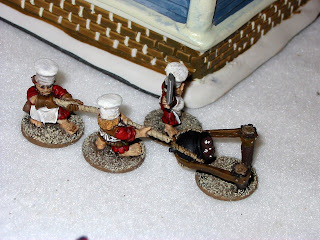 On the right flank of the North Pole Defender's line, the Elf cooks had set up their Hot Chocolate Catapult and with one good shot decimated a unit of goblin wolf-riders. 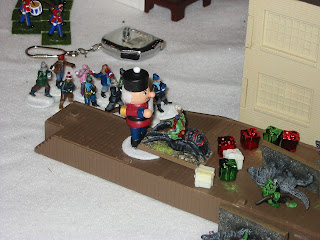 Also on the right flank, around the toy factory, the Giant Clockwork Nutcracker engaged the goblin hero on a giant spider as the kids pelted the remnants of the wolf-riders with icy snowballs. 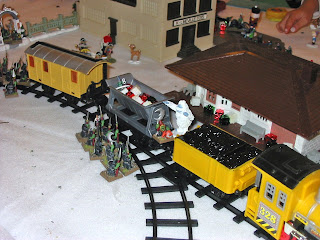 Meanwhile, back at the train, just as the goblin chief went to unhitch the train, the Bumble moved up and engaged him in melee, as a unit of goblin spearmen moved up to support their chief. 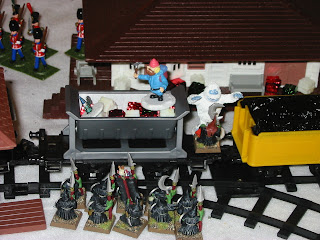 As the Bumble and the goblin chief fought, Yukon Cornelius climbed up into the present car to retrieve the elf-bomb (visible in the photo on the left hand side of the car in the hopper.) He retrieved it, but was hit by a goblin archer. I gave him the same opportunity I had given Santa; that with a half-Save roll he could, with his dying breath, trigger the bomb and drop it over the side of the car into the unit of goblins below. Yukon Cornelius rolled a 20 instead! (Always a bad thing in GASLIGHT) As GM, I ruled that this meant that he had triggered the bomb, but had dropped it back into the car instead of over the side. The bomb went off and blew all the presents in the car sky-high. I took all the presents out of the car, held them two feet above it, and dropped them, scattering them far and wide. The goblin players groaned at this unfortunate occurrence. Subsequently, they had more disappointment as the Bumble killed their chief. The battle hung in the balance, as the goblin forces now focused their efforts on eliminating all the defenders to achieve their goal. 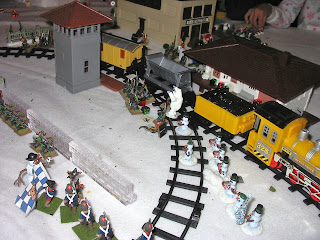 The battle on the goblins' right flank, as they are hard pressed by a unit of reinforcing teddy bears, and the Snowman unit and the Bumble. 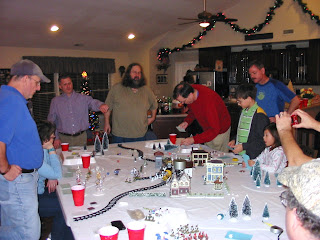 An overview look at the table as the battle nears it's conclusion. 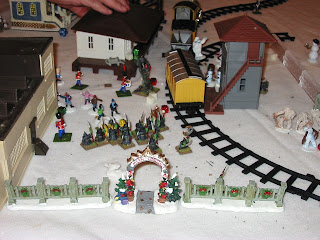 The goblin's had spent themselves on both flanks, and were relying on a fresh unit of spears, and the troll to carry the day in the center. Their hopes were dashed as a hit from the Hot Chocolate Catapult and the remnants of the Snowball-throwing kids shattered the spear unit as the remnants of the Toy Soldier guard held off the troll. The game was called at this point and the defenders were declared the victors as the goblins had nothing left to carry the day. Everyone had a blast and are looking forward to next year's rematch.


The second game of the evening was Buck's Pulp GASLIGHT game. His scenario pitted dastardly Venusians and their gangster allies, against Duke Morrison and the forces of good, which included some soldiers, sailors, the police, and the Deadend Kids. The Venusians and their allies were tasked with locating Dr Nannini's lab and stealing the secret weapon he was constructing. Duke Morrison and his friends were tasked with preventing this. 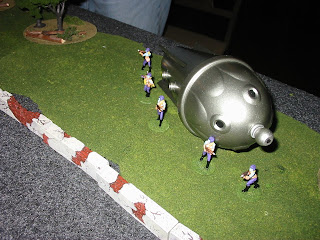 A group of female Venusians land their spacecraft in a woods outside of town. 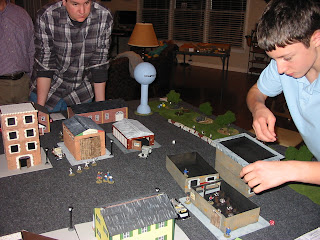 A group of gangsters searches the floors above a pizza parlor looking for the hidden laboratory. 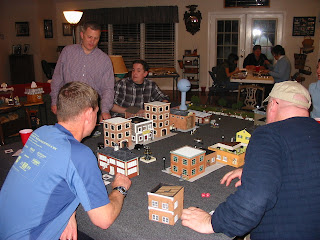 An overview of the table. The gangsters quickly located the lab in the top floor of the pizza parlor building and everyone rushed that way. The forces of good were able to gather their strength their quickly to defend the lab, as the Venusians and Gangsters attacked it piecemeal. 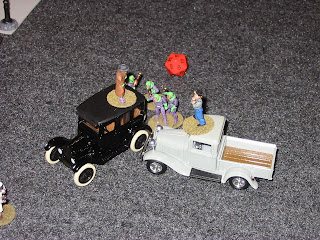 Towards the end of the game a car load of Venusians is rammed by a truck driven by a Deadend Kid who didn't survive the wreck, but managed to take three Venusians with him. Ultimately, the game was a victory for the forces of good.

Afterwards, we broke out the Red Dragon Inn boardgame, and had a great time playing that until about 11:30 at which point we stopped gaming and turned on the TV to watch the New Year ball drop in Times Square.

I hope you all have a great New Year!
Posted by Chris Palmer at 2:57 PM