...And put it inside 10 tons of big stompy armor. Or, at least, that's the thinking behind my latest scratchbuilt project. I was greatly impressed when I recently saw the scratchbuilt Goldfish Mecha Walkers posted on the Irrational Number Line Games website, (See: Here ). These were so imaginative and cool, I knew I wanted to do something similar.  Since I like Pulp and Weird War II gaming, I immediately landed on doing the same thing, but with Hitler's brain.
(Click any photo to see it larger) 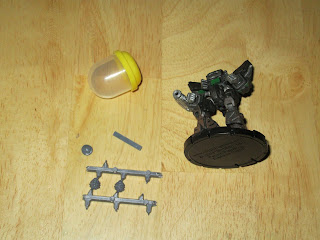 It wasn't hard to find the required parts, taking my guidance from the Goldfish Mecha.  i had a few of the Mech Warrior clicky walkers lying around, and a quick trip to the grocery store got me the bubblegum machine prize capsule.  To make the brain I immediately thought of a Tyranid Adrenal Sac, which i had a sprue of in the bits box.  For the tray for the brain to rest in I used the soft cap from a ECW plastic figure sprue.  The mounting rod, was just a piece of generic plastic sprue. 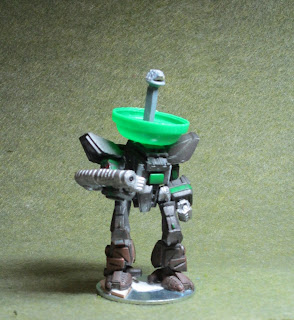 I first removed the Mech from it's clicky base by letting it sit in the freezer overnight, and then popping it of it's base with a hobby knife. I then glued the Mech to a 1.5" fender washer. Next, I had to cut down the head of the Mech model as it was sloped, and I wanted the brain capsule to sit flat. So a few slices with an hobby knife, and the head was nice and level.  I cut a thin crevice down the center of the adrenal sac to make it look more brain-like, and filled in the underside of the sac with some putty to make the brain look more full. Then I assembled the brain, pan, and support rod with plastic glue. To glue the rod to the base of the capsule, and the base of the capsule to he Mech, I used E-6000 all purpose glue. 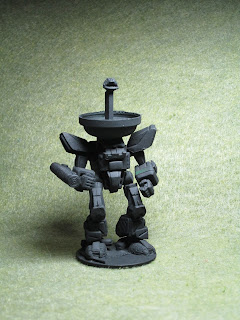 Next I sprayed the whole thing with Krylon Flat Black Camouflage with Fusion Spray Paint.  I then drybrushed it with a Panzer grey shade, and then a lighter shade of grey for highlights. The brain was painted shades of pink, and the tubes leading into it (which are an inherent part of the adrenal sac sculpt) I painted alternating dark blue and copper.  Finally I added some red details and some metallic bits,and then applied some German decals I had. 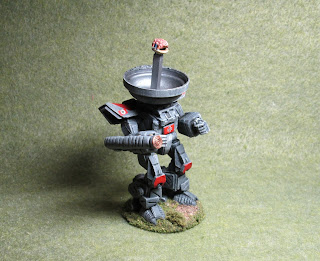 When the painting and decaling were complete and dry, I flocked the base of the model. My final step, when the base had dried, was to spray the model with Testor's Dullcote. Then, and when this was dry, snapping the clear capsule into place. 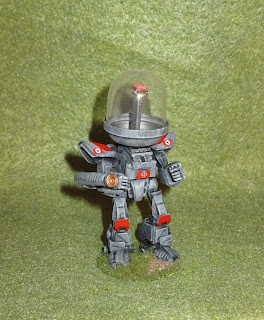 All in all, I'm really pleased with how this turned out, and it really wasn't that complicated to make.  It will be a great addition to my Weird War WWII Collection. 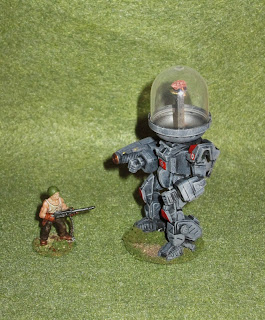 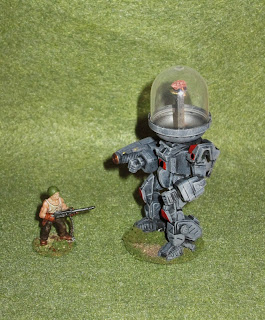