A  couple weeks ago I ran a game using my old GW "Skull Pass" Dwarves.  I had a unit of 6 of the Dwarves with pickaxes on the field, and one of the players remarked that there should be seven of them.  To which another replied that, yes, and they should be led by a certain Disney princess. 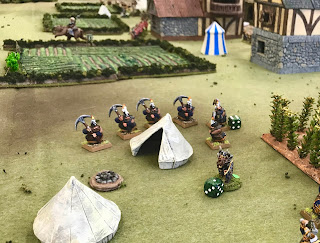 That sparked a memory that my friend, Duncan, had found a baggie of Disney monopoly pieces in a flea market a few years ago, and had given them to me thinking I could us them for one of my games.  I had put them aside not having an immediate use, but I thought that there might be a Snow White figure in among them; and sure enough when I checked the next day, I found just what I wanted.    What's more, her hands were clenched up by her left ear, in a pose that looked just waiting to have a 2-handed sword inserted into them.   Now if only the metal wasn't too hard to drill through. 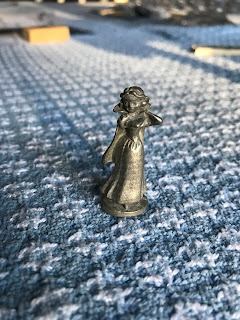 And to my luck, it wasn't!  It was a nice soft metal and I was able to put a hole through her two hands quite easily.  I then looked through the weapon sprues I had received from the Bones 3 Kickstarter and found a suitable sword, and test fitted it. 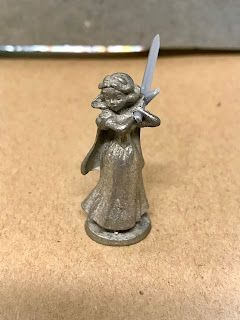 I then glued the figure to a 1" washer, and primed it; and when it was dry, I glued in the sword. 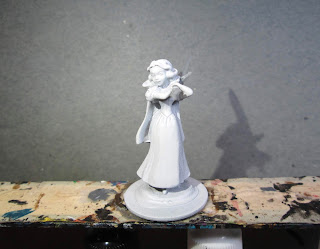 Next, it was an easy task to Google some images Snow White to get the colors right, and with those in hand I painted her up. 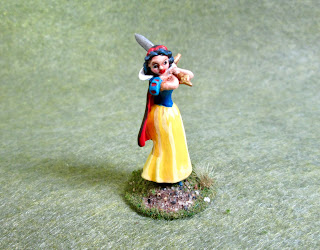 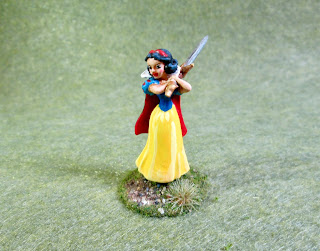 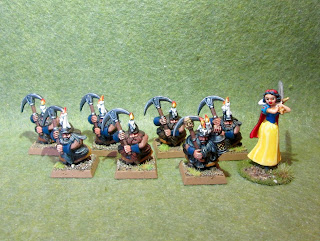 After painting, I flocked her base, and sprayed her with some Testor's Dullcote.    I'm really happy with the way she came out, and I loved doing her primary color outfit; so much so that I'm seriously considering using it on one of my Reaper Bones female fighters now.
Posted by Chris Palmer at 9:34 AM