THE JOURNEY OF VICTORIA HAWKES

A couple years ago I took a creative writing course and did the following for one of the assignments. It is meant to be a prologue to a Victoria Hawkes novel that I hope to finish some day.

The three Confederate airships came in from the south, low over Charleston Harbor. The sky was a dusky blue and details were becoming more visible in the predawn. The sun was going to rise soon. Captain Abernathy, standing on the deck of the second ship, could make out the pinpoint lights and the black mound in the distance that marked the location of the small, federal-held fort in the waters below.
Abernathy was a veteran of the Mexican War in 1848. He had been a crewman on one of the United States’ primitive two-balloon vessels in that war and had subsequently risen to command of his own ship in ‘59. It had been a hard decision for him to resign his commission in the U.S. Aeronautic Corps but first and foremost he was a son of South Carolina; and whatever course the state set, he followed. He had seen war from the vantage point of the skies before and knew its terrible cost. Abernathy regretted knowing he would be seeing it again. He removed his sweat stained captain’s hat and ran a hand through his graying hair and turned to his first mate, William Langley, and said, “Have the squadron form up and prepare for the attack.”
“Yes, sir!” Langley replied. He was young and enthusiastic, his uniform neatly pressed and clean. The son of a Charleston politician, he had received this post through a government favor arranged by his father. He was intelligent and quick to learn though, and had quickly become competent in his job. He turned and relayed the order to the junior officers of the crew. An midshipman hung a series of three colored signal lanterns from the rigging of the ship. In the boiler room, the engineer and his men scrambled to build up the steam pressure. Thick black clouds billowed from the smoke stack on each vessel as the twin propellers in the back began to pick up speed. Slowly the three 40-foot ships, the Columbia, the Charleston, and the Palmetto, maneuvered into attack formation.
The wooden hulls and the rigging groaned and creaked as the movement caused the vessels to swing under the four massive gas bags that hung above each one. The bags, each almost 18 feet in diameter, were arrayed in a line above each ship, running parallel to the length of the hull. Each sphere was filled with Apollium the rare gas discovered in the early 1800s that had three times the lifting power of hydrogen and was not flammable. The airship hulls were covered with one-inch-thick iron plates. At the front of each airship was mounted a 3” Rodman rifled cannon. They featured the new Harrison Recoil Device that allowed the cannon to be fired with little affect to the motion of the ship.
On deck, by the light of oil lamps, the airmen prepared bombs to be dropped over the sides of the ships. Each one was an iron sphere the size of a large pumpkin. Some were solid iron for the purpose of battering the fort from above; others had percussion fuses to detonate and explode on impact, targeting the fort’s defenders with shards of metal and damaging the fortifications with their explosive force. It took three men to lift each one, so the airmen worked in groups as they lined a half-dozen of the weapons along the wall on each side of the deck. One man pulled a hunk of chalk from his pocket and scrawled, “For Abe Lincoln” on the black iron side of the nearest bomb. He and his partners chuckled and went back to their work.
The airships had been part of the Federal airfleet but were commanded and crewed manly by South Carolinians; therefore they remained in the state when it seceded in December 1860. Their mission now was to help eliminate the last Federal affront to their state’s and the Confederacy’s sovereignty: Fort Sumter. 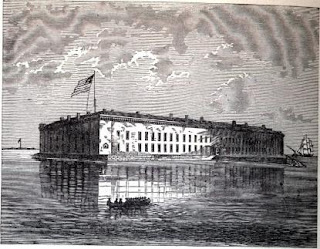 The fort’s defenders were not idle as the Confederate airships approached. The garrison could hear the soft distant thump, thump, thump of the airships’ engines in the fading darkness above. The fort’s commander, Major Robert Anderson, barked orders to his small garrison and prepared to defend the fort as best he could. This was it; the moment he had known would come since he garrisoned the fort five days after South Carolina seceded.
When Anderson arrived he had found the five sided brick structure at the entrance to Charleston’s harbor in bad condition and immediately set to having it repaired. The Major also saw to the installation of a battery of four rifled aerial guns on the top level of the three-tiered fort. These supplemented the few standard heavy cannon which already stood on Sumter’s walls. The aerial guns were 12-pound breechloaders mounted on angled rails on a framework shaped like the letter ”A”. The framework was mounted on a rotating base so the cannon could be quickly turned to fire in any direction.
The fort was manned by two companies of the 1st U.S. Artillery. They numbered only a little over 100 fighting men. There were also the 29 men of Battery B of the 1st U.S. Aerial Artillery. The men busied themselves within the fort getting ready for the approaching assault.
The first shot was fired at 4:30 AM by one of the Confederate land batteries located on James Island at the south end of the harbor. The other Southern batteries, also located at various positions along the harbor’s edge joined in. Fort Sumter’s defenders returned fire upon the attackers, many of the shots falling harmlessly in the water or behind the batteries. Likewise, the attackers’ shots had little effect on the five-foot-thick walls of the fort.
Meanwhile, the three airships lined up for their approach. They were about twenty minutes from passing over the fort. Captain Abernathy, on the Charleston, ordered all lamps doused onboard the ships. The Federal Aerial gunners in the fort below could still make out the dark shapes of the approaching vessels.

The gunners at the bow of the Colombia, the lead ship, prepared their 3-inch Rodman gun. When they reached a thousand yards from fort Sumter, they opened fire with their first shot. The cannon ball landed short in the ocean before the walls of the fort. They adjusted range and fired again. This time the shot landed against the southern wall, doing little damage. The other two ships, the Columbia, ahead and to the right of the Charleston, and the Palmetto on the left behind her - opened up with their guns, too.
The small shells had little effect against the walls of the fort. When the airships reached 500 yards, they started to load fused shot - hollow shells filled with explosive that would be set to detonate over the fort, raining down iron shrapnel on the defenders. 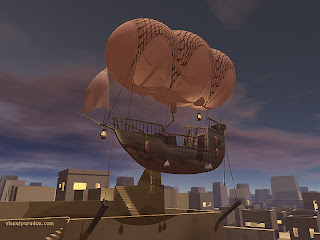 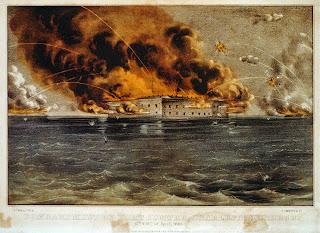 Below them was a massive explosion in the fort as the entire payload of bombs and almost all the crew landed on top of Sumter’s powder magazine. The southeastern wall of the fort blew completely out into the sea. Half the guns in the fort were unseated from their mounts and as many Federal gunners were killed. The surviving aerial gunners on the top level of the fort’s northern wall ran for cover as the flaming wreck of the Columbia descended like a comet down upon it. The airship hit with a massive explosion as the boiler burst, leveling a large section of the fort’s wall and leaving a huge crater on that side of the fort. Captain Abernathy and First Mate Langley perished in the blast.
The crew of the Palmetto, coming up behind the Charleston, looked on in horror as their sister vessel met its fate. To add their barrage to the inferno below seemed pointless. Two-thirds of the fort was smoking ruins and they couldn’t be sure if there were any of the Charleston’s crew still alive in the wreckage. The Palmetto’s captain decided to turn away from the attack and head after the Columbia to see if it could offer assistance to the wounded ship.
On shore, the land battery crews stood in awed silence, their cannons momentarily forgotten.
In Fort Sumter, Major Anderson, the fort’s commander, was nowhere to be found. The survivors assumed he was buried somewhere under the rubble and wreckage. The highest ranking officer who could be located was a lieutenant; Lieutenant Worthy. Despite having a wounded arm, the officer was still able to walk.
The flag pole with the American flag, which had stood in the center of the fort, had been vaporized when the bomb load from the Charleston had landed there. Worthy ordered one of the surviving sergeants from the 1st Artillery to make a white flag from a undershirt which lay on the ground bloody and without an owner. Worthy took the flag from the Sergeant and slowly crawled up the remains of the fort’s wall that faced towards Charleston and waved it solemnly at the Confederates on shore.
The war had begun.
Posted by Chris Palmer at 4:22 PM