Subtitled: Some Things Should Never be Allowed to Thaw...

This past week I completed an unusual terrain project for my Frostgrave games; and a little back story is required first.  Over the summer I took part in a round-robin miniatures-themed exchange box; where a box is sent around and each person takes whatever they want out, and puts in an equivalent amount. I took from the box: a GW Harpy figure, a section of tail from the Reaper Bones undead dragon "Kaladrax" figure, and three hexagon shaped ceramic tiles.  I wasn't sure what I was going to do with these items when I took them, but as I sat at the dining room table looking at them, a crazy idea came to me of how I could combine them.  I gathered some other parts, and started. 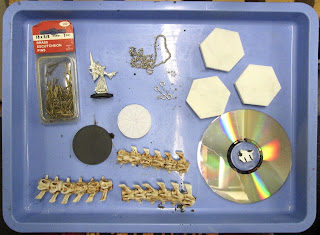 As you can see in the photo above, I also used a CD, some bases, a plaster disc I had, four small eye rings, some small nails, and a length of jewelry chain.  Also note, the Kaladrax tail section has been cut in three equal pieces.  I assembled them as shown below. 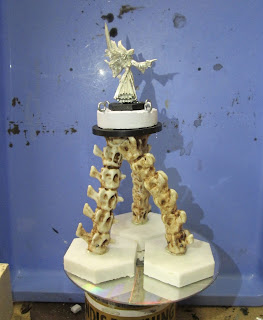 After assembling I realized I hadn't primed anything, so I carefully wrapped the Bones tail sections in paper, and sprayed the whole piece with White Primer.  I then began painting it. 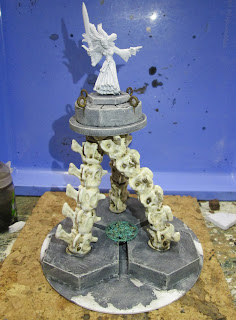 I had originally intended to have the figure on top partially frozen in a hunk of ice; and I planned to use Woodland Scenics "Water Effects" for that.  So I tested this idea on an old GW skeleton figure I had lying around.  In the end, I felt it didn't resemble ice enough, so I scrapped that idea. 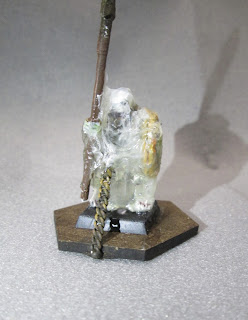 I ended up just winterizing it in a normal fashion with some piles of unmelted snow and a few icicles. 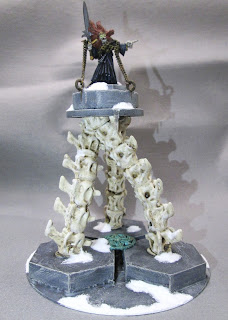 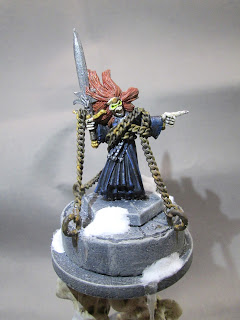 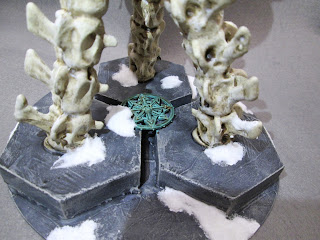 I'm really happy with how this turned out.  It's odd, but I like it!  I look forward to using it in this month's Frostgrave campaign game.
Posted by Chris Palmer at 11:51 AM