I was privileged this past week to take part in the recording of a demonstration video for the just-released Star Wars supplement for Buck Surdu's innovative Combat Patrol: WWII skirmish rules.  I played in a small 2-player game, along with the supplement's author Greg Priebe.  The scenario we used was based on the first episode of the first season of the Clone Wars animated series, Ambush!.  Combat Patrol author, Buck Surdu, acted as our Game Master. 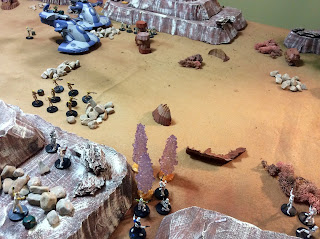 It was a really fun and close game.  I commanded the Droid forces, and the Clones did managed to take out my two tanks;  but by the end I had severely wounded Yoda, and decimated the Clone force down to just a few remaining troopers.