This past Saturday the HAWKs hosted their first ever Invitational Gaming Day.  This came about after some regular attendees of the HAWKs BARRAGE convention, from New Jersey, asked the club if it would be possible to get together on a more informal basis this October for a friendly day of gaming, after this year's BARRAGE had to be rescheduled to January '18 due to a mess-up with the venue's scheduler.  We ended up with a nice crowd of over 30 gamers from the HAWKs, New Jersey, and some from Western, MD and Pennsylvania. 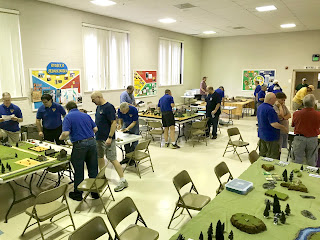 We used the meeting hall in the church where we run our regular meetings, and set up six full sized 8' x10' tables, and scheduled for two blocks of games; the first from 9:00AM- 1:00PM, and the second from 2:00PM to 6:00PM.    The games offered spanned many historical periods, as well as both the Fantasy and Sci-Fi genres. It was big success, with everyone having a great time, and there's already talk of doing it again!

Thanks to the GM's and gamers for making this such a success.  From the onset we decided we wanted to keep it simple, so there was no food service (we ordered some 3' subs from a nearby Subway for lunch), and no flea market.  It really was a great low key and informal chance for gamers to get together for an excellent day of gaming.
Posted by Chris Palmer at 9:05 AM