This past weekend we got together for the third game in our Ghost Archipelago campaign.  We had 5 of our regulars players and one guest player.  We continued to work on the scenarios in the rulebook moving on to the second one: The Drichean Cages.    We used an 8'x3' table and had three cages with their prisoners spaced evenly down the centerline of the table.  Our job was to free the prisoners, and exit with them, or at least have possession of them at game's end.
I was lucky with my chip draw for starting location, getting second choice.  I picked one of the corners, down by the waterfall, as there seemed to be a good chance at getting at least a couple treasures there; including one that was easily within a single move away.    The Heritor Gregorious and his Storm Warden, Missy, were directly across from me...it seemed the rematch that my Heritor and Gregorious knew would come one day after our first game, had arrived this day.  To my right was a new Heritor,  Kragmar of the True Blood, and his Storm Warden, Samael Gale.  Diagonally across to my front right was the Heritor Herndon and his Storm Warden, Arwhine.

To see my report from our previous game, see: The Xs Mark the Spots.

Lord Fortrywn was a retired general, and the Elf Heritor was used to seeing dead bodies, and had already seen a fair share here in the Archipelago; but the one lying in the grass before him held special interest, for he recognized the man.  It was the Heritor known as Tavic.  The Elf would not shed a tear today for one who shared the blood gift, for the man was a known brute and lacked any civility.  But Fortrywn did know one good thing about the man; he had amassed quite an enormous amount of treasure very quickly here in the Archipelago, something the deceased Heritor had never been shy to brag about. And everyone knew the crafty Human Heritor had hid it somewhere to keep it safe.
Just then, Lord Fortrywn's Hunter, Gwynwater Lighteye, came up and stood at attention before her old commander waiting to report.  The Heritor lifted his head from looking at body at his feet and simply raised an eyebrow at the tall Elf-woman.  Gwyn held open her palm, revealing a pair of bronze arrowheads on the ends of broken shafts, and stated, "It's Dricheans, sir.  There's the bodies of three of his crew15 yards over there," she tilted her head,  "and more of these," she indicated the hand with the arrowheads.  "And a shattered bronze blade."
Lord Fortrywn picked up one of the metal points and considered it, his mind working on an idea.  He set the arrowhead back in Gwyn's hand, and thought out loud, "If there are only three dead, then some of his crew may have survived; and these survivors may know where old Tavic's treasure is hidden."  He stared out into the jungle.  "You've heard of Tavic's Treasure, or course."  he directed his attention at Gwyn.  "If you can pick up a trail, and we could locate the remaining crew, they might be very grateful to whoever rescued them from the hands of these islanders."  The Hunter smiled, and dropped the arrowheads into the tall grass. Turning, she strode away on her long legs to find the way.
Two hours later,  Gwynwater  put up her hand to indicate the group should stop.  Lord Fortrywn came up to her, and silently the Hunter pointed to her own ear, and then pointed ahead.   The Heritor tilted his head, listening, but all he heard was the sound of rushing water; as if a large churning river was ahead.   He strained with his Elven ears to hear past the sound of the water. And then suddenly he picked it up faintly...voices in the distance.  Gwyn held up 4 fingers.  They advanced slowly, through the vegetation, until they both could see movement, and the glint of the sun on bronze armor.  The voices and the roar of water were much louder now.  Also, a large cliff face rising on their left had come into view, and from it a  huge waterfall plummeted from the top into a wide pool below.
Lord Fortrwyn divided his party into three groups.  With him he took Gwyn, and the two seasoned crew-women, Arbyn and Bry.  He ordered Randilas the Archer, Salin the Pearl Diver, and the crew-woman, Meriwyn (who was making her first trip with the ashore party) to go with his Warden, and niece, Marnilyne.  Lastly, he had the two crewman Dirkand, and Lurlin wait in reserve to help where needed.
Only a few yards further, and they came to a large frog-like idol.  The Elf Heritor sneered at it's repulsiveness, and shook his head in derision at the pathetic gods of these islanders.   Turning back to the matters at hand, he could now make out a small cage in the distance, which seemed to be resting in a small stream. Inside the cage they could see was a man, and around it stood four Drichean Guards.   Lord Fortrywn then surveyed his more immediate surroundings; he saw a large wooden totem a short distance away on their front right, and beside it set a chest and some jugs. Offerings, perhaps?  He pointed to Gwyn and Bry, and then to the totem. They quietly and quickly jogged over, and when they got to the totem, the Hunter launched an arrow at one of the Drichean guards in the distance, missing, while Bry, the crew-woman, investigated the chest.  Meanwhile, the Heritor had strode towards the cage and its guards, while Arbyn headed off towards their left. 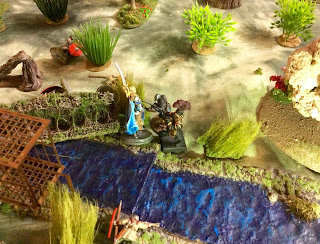 So close... I almost had it!    What a great game!  I came so close to getting the Central Treasure (the prisoner).  The final minutes were so exciting as Gregorious and I fought tooth and nail for control of the prize.  At last it seemed victory was mine, as I disabled all his troops in the vicinity.  But both Gwyn and Lord Fortrywn had activated, and I knew the game was almost over.  Who could I get there in time to actually grab the prisoner?  And then I saw the Warden.  I measured; yes, she was within a 6" move of the prisoner.  the Warden Phase came and I moved her over to the prisoner, her second action was picking the "treasure" up.  Then came the Soldier phase.  Surely, Gregorious would attempt to move his crossbowman to safety.  Nope.  He announces he wass going to take a Hail Mary shot at the maximum sight range for the Cloud Cover, and sacrifice his last figure to deny the treasure to me.  I was confident he'd miss. I was wrong. And I had sacrificed a lot of he Warden's  HP to "push" spells, thinking she would never be involved in any real combat.  Down she went.  I had one last hope; if the Monarch actually lost the combat with the Crossbowman, the game wouldn't end in the Creature Phase, and I'd get another chance to grab the prize.  But, no,  I rolled the attack against the Crossbow for the beast, and rolled a 16, plus the Monarch's Fight +8. It was more than enough to kill the wounded man, and with that being Gregorious' last figure on the table gone, the game ended.
I couldn't have asked for a more exciting finish. I just wish had gone in my favor. Ah, cruel fortune! :)
All in all though, it was a pretty good game for me.  My dice rolling was actually on the good side, with a lot of nice 18s or 20s when I needed them. And I got two treasures, which is a step in the right direction for me.  Also, the Experience Points for killing a couple Drichean Guards, and freeing the prisoner helped.
The game was interesting in that it devolved into three distinct player vs player battles.  There didn't seem to be any of the sniping on the flanks, at least down by our end, that we usually see.  I'm not sure if that was a function of terrain, or the immediate need to deal with the four Guards in the center of the table.  It was also interesting that I was the only one to actually free one of the prisoners.  At the other cages, the Guards put up more of a fight, and the opposing crews' missile troops kept each other at bay from getting too close to the prisoners.
The next game is in just two weeks, and Lord Fortrywn is looking forward to testing his mettle once again.  We feel the tide has turned in his favor!   Stay tuned!
Posted by Chris Palmer at 12:23 PM