I was recently going through some old digital photos of GASLIGHT games that I ran in the past to review what troops I had (it was easier than digging out the boxes!) in preparation for putting together my Historicon scenario which I will be playtesting in the weeks ahead. I came across the following photos of a pair of 54mm GASLIGHT vehicle projects I did in '03, but never showed anywhere for lack of a venue. Now that I have this blog, and most of my current time is involved with last minute convention prep, I thought it would be a good opportunity to"dust these projects off" and share them with you all in hope that it offers some inspiration for your VSF projects. 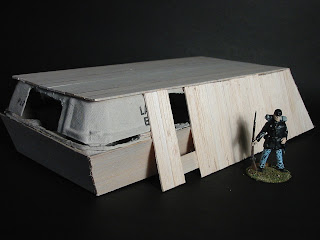 First up is a Confederate landship I built, called the Daisy Cutter. The basis of the hull is a dozen-egg egg carton of the pulp-paper variety. I glued the carton together, then cut out holes for the port and starboard cannons and a front viewport,then I glued balsa strips around the bottom half of the egg carton to form the bottom of the hull. I then glued half inch balsa strips around and on top of the vehicle to form planking, leaving holes where the cannon and the view port would eventually go. I also cut slots underneath to mount wood disc wheels. 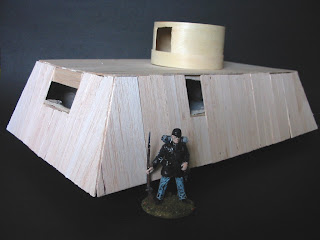 Here is a shot of the complete planking. i have included a 54mm soldier in the picture for scale. On top of the landship I have glued a turret made from a thin wood craft box. It is glued upside down so the lid forms the ring for the turret to sit in. I also cut a gun port in this. Underneath I glued eight wood disks to make wheels. 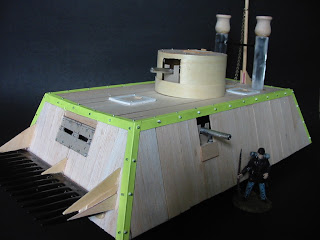 Next I added all the finishing bits. In the front I glued a wide-toothed comb to form a rake to sweep aside Yankee formations. I also mounted all the guns, which were cast in a homecasting artillery mold, and gave them balsa gunshields. The smokestacks were made from plastic tubing from the junk box, and the smokestack finials were made from wood craft bits. On the back I mounted a spar torpedo to deal with any threats from behind. The spar is made from a dowel, and a bit of necklace chain added a nice touch as the lowering cable. I also added balsa hatches and a cardboard viewport. Around the edges I glued heavy paper to finish the edges nicely. Then I added rivets made from very pins stuck through the balsa. 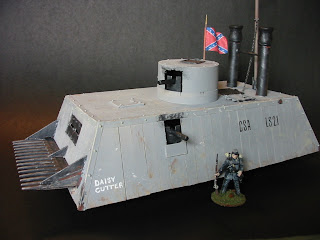 Here's the finished model with paint and weathering applied. 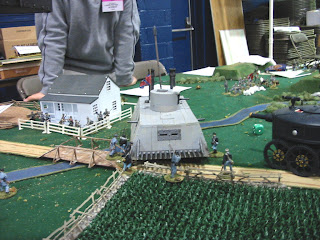 Here is the Daisey Cutter Landship in in its first convention game at Fall-In '03. 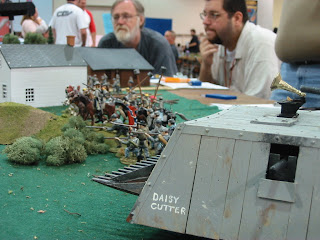 Here it is in one of my GASLIGHT games at Origins '04. Note the addition of a dollhouse Victrola on top, to play stirring battle music as the landship rolls into combat!

Next up is a 54mm Union walker I built. It is converted from an old Star Wars AT-ST, or Chicken Walker. This is the kind designed for the large action figures. You can pick them up rather reasonably on eBay, especially if they've been played with hard and are a little As-Is. 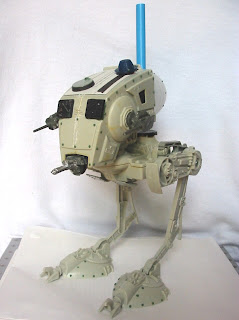 I added a homecast Gatling gun where the central lasers were, and trimmed the side ones to make them look a little bit more like cannon. I also glued plastic bases with diagonal slots over the existing front vision slits and a round plastic base, without a slit, on top to form a hatch. Then I glued a hose washer on top also to make a air vent for the cabin. 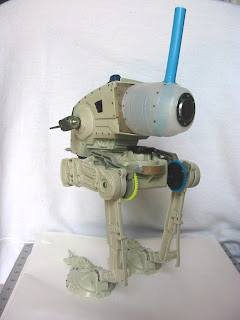 On the back I cut down, and glued a Li'l Hug drink bottle to make a boiler and a large straw to make a smoke stack. I also glued to Clix bases onto the rear leg joints to give them more of a gear look. The whole thing was then liberally covered in rivets. 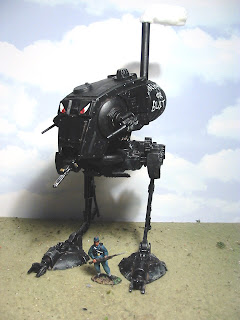 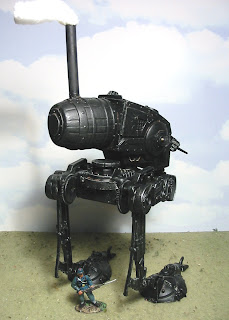 Here are some photos of the finished product shown with a 54mm soldier for size comparison.
Posted by Chris Palmer at 5:42 PM